I have been in Richmond a week to day my dear Mother, and two posts have past without my hearing from home. Elizabeth and Virginia received letters to day from Harriet, but she says nothing of the Monticello family, & I wh[. . .] I am beginning to be very anxious to hear from you all.

Aunt Hackley is in daily expectation of Mr Hackley, who seems however to be in no haste, but to allow himself full leisure to transact his business, without making great [. . .] efforts to join a wife from whom he has been voluntarily separated for the last ten years—in the mean while she is in a state of constant anxiety, but commands herself perfectly, and loses nothing of her wonted dignity and self-possession.

The very day that I sent my last letter, Cousin Bolling paid me a visit, and I found her exactly what I expected. kind amiable, affectionate, & [. . .] remembering us as the children of her old friend. and although fourteen years have past without her seeing you, or any of your family. We are engaged to spend the day with her to morrow, and shall go from her house to Capt. Peyton’s, who to use the fashionable phrase, ‘makes a party’ for us on that evening. the distance is so great between the two hills that we I have but little intercourse with my old acquaintance. the Marxes, the Gibbons Mrs Bell & Mrs Peyton have called on us, I have seen one or two of Aunt R’s old boarders, but the only person from whom we have received regular & marked attentions is Mr Kootes. he visits us frequently, offers us his services as an escort when wherever we wish to go—in short his time as far as he can himself command it, seems perfectly at his our disposal.We spent last evening at Maj. Gibbon’s, and although in going we had [. . .] the mortification of the bay and the grey, the evening passed off agreably enough—I saw and recognised several of my old acquaintances, and heard some very fine music. Mr Nicholas of Philadelphia, Cashier of the Bank in the room of Julius Dandridge has unquestionably the finest voice I ever heard, and appears to be one of the most scientific musicians. [. . .] he sings by note, and in a style so infinitely superior to any thing that I know, in this state [. . .] that if he were not evidently a well bred man, acquainted in the best of the Philadelphia circles, I should suspect that music had been taught him as a profession. however this may be, “sounds to create a soul under the ribs of death” [. . .]is would scarcely [. . .] be an exagerated mode of expression when applied to his voice. & this voice will haunt me for some all time to come; [. . .] it’s deep, rich and mellow tones are still vibrating in my ear’s—but to morrow, to morrow I shall hear it again and come home to tear my music books, [. . .] break my piano (if I had one) and set down in calm desperation at the utter impossibility of ever tolerating any music that I am likely to hear again. Mr Nicholas is moreover entirely agreable in manners and person, and what is better he was right attentive to me, and that you know is the test of merit although he took great care to let me know that it was only in consideration of his having known my friends in Philadelphia. of some of whom he gave melancholy accounts. Elizabeth Philipps has become a perfect wreck. scarce a vestige of beauty remaining, and Matilda Dallas in person so much altered for the worse, as scarcely to be recognized by those who knew her in her days of loveliness.

I expect from “present appearances” that we shall be with you almost as soon as this letter, but I have written from the possibility of our being detained a day or two longer than we at present expect. I have had as you may suppose no time to practise on the piano, but indeed the only one which we can command (unless we had the good-sense to disregard the presence of the school-girls, is so indifferent an instrument, that I should greatly prefer the old harpsichord. it is vastly inferior in every respect to Mrs Higginbotham’s and I cannot bear to play on it. I find the fashionable music also as little to my taste, although at first I thought it would be very agreeable to make a collection of it; that insipid family of Waltzes, all so much alike, and striving to make up in difficulty of execution what they want [. . .] in genius, has already exhausted my [. . .] patience, and I am heartily sick of them all. it would require a quire of paper to enumerate the names of these tiresome things, with their never ending variations. we have, the Danish, the Swiss, the Bohemian, the Munich, the Stantz, the Stametz, the Russian, The Memel, the Hanoverian, Pampelunian, Brazilian &c &c &c &c.

Adieu my dear Mother, I hope to see and embrace you very soon, Remember me to all, and believe in the unceasing affection of your daughter 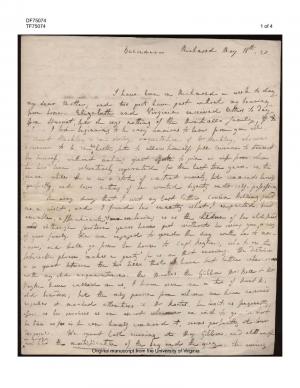