I should have answered your first letter immediately on receiving it, my dearest Virginia, but expecting the carriage every day, I thought it probable that I should reach Monticello as soon as any letter I could write. the post goes up but twice a week and it is not always convenient to send on purpose, therefore, there is always a chance of the letter’s being some days, in the office. this unlucky weather has already detained me longer than I wished or expected, and I fear you will hear from me more than once before you see me. this delay is the more unfortunate as my books and music are utterly neglected during the whole time—the piano is so entirely out of tune that there is no practising upon it, I have scarcely touched it. our breakfast is not over before half past nine, we dine at half past two, & drink tea at four, so that these short days are cut up in a manner to render them useless to one accustomed to such different regulations—a little sewing work for Aunt Cary , & chatting with my Aunts & playing with the children who have all become great favorites with me, occupy my whole time, & although I brought a Virgil down with me, I have not looked in it, or in any other book, except to give myself the laughing hysterics over love & matrimony as described in Richardson’s inimitable Sir Charles Grandison. I have been tortured by a tooth-ach (in the roots of the tooth which Baker crushed for me) and yesterday is the first day for more than a week that I have been entirely free from pain, this has contributed not a little to indispose me for occupation of any kind; I do not know what I should have done but for a supply of tobacco which I fortunately happened to have with me, and were I a poet I should certainly celebrate the virtues of this admirable plant, which deserves all & more than has ever been said of the poppy. I congratulate you on your heroism in submitting to an operation, which I hope will be attended by happier consequences with for you than it has been with for me in my case, perhaps from a less skillfull performance of it. you deserve the more credit, from having had no one to spirit you up —if I had been with you I should have looked upon your fortitude as but the reflection of mine, & very modestly assumed to myself the the chief praise.

Louisiana Cocke left us yesterday after a visit of three days, shortened perhaps by the her Papa ’s prudent apprehensions, lest he should appear to encourage hopes he can never fulfill. How much of Grandison there is in that, & do not you fear for your Sister the misfortunes without the merits of Clementina. Louisiana, or Noony as she is called by way of diminutive, ought to be beautifull, but she certainly is not. large eyes of the [. . .] finest red hazle, auburn hair, very much like what Sister Ann ’s was, when she first grew up, a delicate shape, a skin & complexion of unrivalled beauty, a mouth & teeth literally composed of coral & pearl an ingenuous countenance—and at first sight you will pronounce her to be absolutely ugly. she improves on acquaintance, and your the eye learns to dwell with pleasure on these beauties of detail in which Nature has been so lavish. she seems to be exactly, what you would call, a sweet girl, but the absence of a mother’s care is visible in a great many little things which none but a mother can correct. a judicious & attentive father may do a great deal towards forming the mind & manners of his daughter, but no hand but a mother’s can give the last soft touches which the painting requires, & without which it is an unformed unfinished thing. and yet there are some exceptions to the general rule. our mother, lost her’s at when she was yet a child, but she had superiour advantages of education, to say nothing of those received from Nature.

Have you heard any thing of Mr Darmsdatt’s will, & whether he has done any thing for Jane Braddick or Aunt Randolph —we were a good deal shocked at hearing of the old man’s death; it was so entirely unexpected. I have had my fears excited by a paragraph in a newspaper concerning the death of the Spanish Consul’s son in New York; killed by a Mr Robert Goodwin; Mrs Stevenson has a brother of this name, but I have not been able to learn whether he is the person in question.

You We hear nothing, see nothing, in Fluvanna, Bonaparte might die, or the Pope turn Turk, and we should be none the wiser for it. the Solitude here has been unusually profound, not even interrupted by the presence of the K.O.K., and I have serious suspicions on the cause of this absence. can such absurd vanity exist in the breast of man, or is it merely to silence reports equally unpleasant for us both. (by the way, I do not care a straw about them, except when they are carried so far as to become a bore). however this may be, to let the subject rest without any affectation of avoiding it, and as not to jest unless I am first jested with, & above all never to look serious in displeasure about it —these are my rules, & do you & the girls also observe them, my dear Virginia, especially in presence [. . .] Jane & Sarah Nicholas.

I have written you a long dull letter, but you can expe[ct] nothing better. [. . .] Apropos to Fluvanna, Aunt C. has explained to me the speech made in the Royal presence, (on the subject of her nieces’ dislike to the spot graced by such a residence), perfectly to [. . .] my satisfaction. & to your credit. Adieu my dearest Virginia —you are the only one of my sisters who love me well enough to write to me—& my gratitude & the increase of my affection are in proportion—“trifles make the sum of human things” and I acknowledge that my heart is very much influenced by them; you will receive these assurances, as the offspring of affection, & not of vanity, stimulating your exertions by the a promise of reward in the increase of my good opinion. a great deal of love to every body & once more adieu my dear Sister.

your second letter & the flannel arrived safe. love & thanks to my dear Mot[her.] Aunt C. asks as a favor that a bottle or two of red wine may be sent he [r] in the carriage—pray heaven the trio may not be marked. 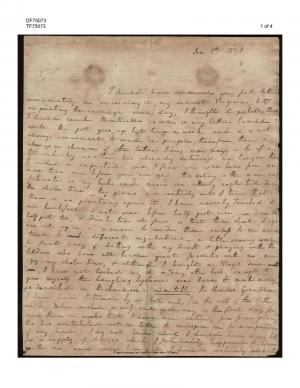