I received your letter of the 24th yesterday evening, my dearest Mother, three days after date, and this circumstance is particularly comforting to me, at a time when your state of health will keep me constantly anxious to hear of & from you regularly, and without any [. . .] post-office delays. I have been thinking what an unpleasant day we spent on the road, the friday after leaving you, and that at that time I thought [. . .] nothing could have increased the discomforts of my situation; [. . .] but how totally all personal considerations would have been forgotten, if I could then have known that you were in a state of sickness and suffering.

Jefferson's attentions to you are just what I should have expected from this his devoted attachment to you; an attachment which all your children feel to a degree that makes it a ruling passion—I how much pleasure it gives me, especially when I am separated from you, to recollect all the claims which you have to our devoted gratitude and affection & to feel that your cares are repaid, as far as the our utmost tenderness can repay them; and ‘still paying still to owe” is the most delightfull of all obligations in such a case as this. Grandpapa and myself are in the habit of sitting, some time after dinner, in conversation, upon different subjects, and it was but the other day, that, speaking of education, & the influence exerted by mothers over their children, he paid to his grandchildren the compliment of all others the most valuable, that of alluding indirectly to what he considers their excellences, and ascribing them to education and the influence of example.

Cornelia and myself have been quite industrious since we arrived here, and the pleasure we take in each others society, our free & unrestrained conversations, are the best proofs of the slow—but sure advancement of the union you have sometimes spoken to me of and considered so desirable. had it taken place sooner or more suddenly between characters and tempers so different, it would have been a plant of forced and perhaps sickly growth, but its gradual development will give time for the roots to strike deep; I do not think the firmest attachments are those which are the affect of habit, and of that sort of consciousness of the excellencies of the object, which arises rather from their never having been disputed by others, than by any investigation of our own. I [. . .] have never under-valued Cornelia, although she perhaps may have thought so, and mistaken eagerness of manner and impetuosity of temper for an affectation of superiority—if these suspicions have ever existed, time and the development of character on each side, will do them away, thus removing real injustice on one side and the appearance of it on the other.

With all my wishes and all my efforts to [. . .] make the best use of my time whilst here, I have not yet done much. we have had some interruptions from company, and one, much more serious, from the dangerous illness of Burwell. the little house-keeping which this threw on our hands, was too trifling to be taken into the account of time, but I lost many hours from real anxiety, I might almost say unhappiness, for the life of a servant so faithfull, so attached and so usefull to my dear Grandfather, was of sufficient value to justify very acute feelings. the complaint was an obstruction in the bowels which refused to give way to any remedies, untill Dr Steptoe tried bleeding him untill he fainted or very nearly fainted. I never saw any one suffer more; he had been sick some time before he gave up his usual employments, and then it was some days before a physician could be procured. our simple remedies & those recommended by Dr Steptoe, (whilst Burwell was still well enough to go to his house to consult him,) thinking it was an ordinary cholic, had all failed—he had been two nights without closing his eyes; on the third I sent him a small dose of laudanum, (the doctor had told him he might make use of it to abate the violence of the pain) if it continued, and it appeared to me impossible for any body to suffer such agonies for such a length of time without danger of inflammation and mortification; this produced the desired effect of giving him a quiet night, but the cause was not removed, the pain returned, and two a day or two after, the doctor found the danger so pressing as to devote almost two days to him, although his own brother was very ill at the time. I never saw any body more uneasy than Grandpapa, and his constant anxiety by convincing me still more of his extraordinary value for Burwell, increased my own fears and feelings to a degree that surprized even myself. I had taken it into my head from the beginning that the disease was a billious cholic and consequently very serious—but I did not know what was necessary to be done, no help was at hand, and I thought very frequently, good god! if he should perish for want of assistance. He is still weak from the effects of the bleeding, [. . .] but I hope completely out of danger & has gone to work glazing again, although he cannot do much at any thing as yet. John Hemmings paid him attentions which were really affecting, I always believed him an excellent creature but I think better of him now then ever. I really believe that at one time his advice and application of a warm bath, by the temporary relief it procured, enabled Burwell to stand against the violence [. . .] complaint untill the doctor's assistance was at last obtained. I d[. . .] Grandpapa Cornelia and myself make as complete a trio of ignoram[us]es as I do know. and I do not believe our three heads combined contain as much medical knowledge as would save a sparrow. I am determined to qualify myself for taking a degree as soon as I go home. I must not forget to tell you that Israel has shone, during B.s illness—has kept himself as clean and genteel as possible, and in the pride of being chief waiter has followed Miss Edgeworth's Hamilton's rules, of doing every thing in its proper time, putting every thing to its proper use, and every thing in its proper place, with as much exactness, as if he had studied them with every desire of edification. Grandpapa is quite delighted, and I am obliged to abuse Israel every day to prevent him from thinking hereafter, that the complaints I have no doubt we shall have cause to make, are without foundation—is not this being very prudent and shewing great judgement and forethought.

Mrs Radford has as usual been very attentive to C— and myself. Mrs Yancey is lying in with her sixth child, (which with the other five) enjoys good health and a prospect of life. she is but six and twenty and likely to share in the glory of the fair young lady of [. . .] mentioned by lady Montague who [. . .] having brought forth thirty living children, was so unfortunate as to be stopped short in her career, by the corpulence produced by of too gross health. Mrs Y. is not likely to be checked by the same cause.

Adieu my dearest Mother my letters are too too long, and as much as I regret this defect, I almost despair of ever correcting it, although I know it is one of those things to which I should force myself; for one of them an indefatigable pen, is full as impertinent as too long a tongue. I must however thank you for all the trouble you have taken about the Folia; I only wish I could put it to immediate profit. Be so good as to send us some ink & paper by the carpenters; my our latin exercises, spanish verbs &c take a great deal independent of letter writing. Kiss my precious George for me and give my love to all the girls and boys. I shall write to Aunt R— if I have time. Remember me to Jane & Jefferson, and if Sarah has come up offer her my sincerest congratulations on her returning health. Remember me also to Mrs Trist & Aunt Marks, a great deal of love to my dear Papa and kisses to Septimia. for yourself my dearest Mother you know too well what my feelings are to render any expression of them necessary. 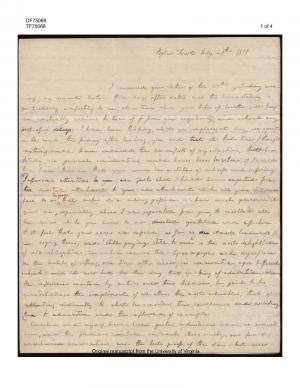