I have no particular reason for writing to you my dear Mother, unless it be pour vous donner de mes nouvelles and to tell you that Aunt R. begs you will get a box of wafers at Mr Leitch’s and bring them down to her. I have been almost constantly unwell ever since I came down, and have suffered greatly from the disordered state of my stomach, I have tried starving [. . .] and fennel whiskey with little or no success, and must make up my mind to abide by the old proverb, “what can’t be cured must be endured”. I date all my indisposition from the night of the play; whether from cold taken, I know not. I have been prevented by these causes from visiting Mrs Miles Cary, who is still very sick, although better than she was. this unavoidable omission distresses me, & I believe gives secret satisfaction to Aunt C. who is well pleased that her relations should neglect his, by I suppose by way of retaliation; what an unreasonable thing is passion preferring its own trifling gratification to the advantages, the inestimable advantages of family union. it is a pity that a woman with so many really fine qualities should be so unfortunately constituted in one respect, as never to be able to hold to more than one set of friends at a time. for the rest, nothing could be more kind than the whole course of her conduct to me during this visit, and I feel that if she could only be consistent in it this kindness I should soon love her as much as she your near relationship and the circumstances of her education would justify—both Uncle & Aunt C. disclaim for their son his ever having spoken in disrespectfull terms of his school fellows, or his master. Uncle Cary was discontented with the little progress he had made, in any thing except Latin (which by the way is I believe is the only thing Mr Stack professes to teach) and questioning him very close Wilson acknowledged that he was pretty much master of his own time, and was at liberty to dispose of himself according to his liking after eleven o clock—examined also on the circumstances of the riot, & (his being obliged engaged in the purchase of wine & cigars for Preston brought this subject on the carpet) he said he believed the young gentlemen were a little tipsy at the time of the assault on La Porte’s house; (and we know that they were.) this, with some acrimonious observations upon one of the boys, Dabney Overton, with whom he had had a personal quarrel, comprises, as far as I understand the whole ground work of the perfidy which has been laid to Wilson’s account—I tell you this merely for your own satisfaction, for as a great many things remain still to be cleared up, such as Gen. Cocke’s letter to his son &c &c, I shall by no means be quixotic enough to go about breaking lances [. . .] in favor of a cause, which I do not yet understand. & perhaps by this means involve myself in difficulties with the K.O.K. whose favor is of much importance, and who me thought looked on me with a frowning brow during a ten minute’s visit he has paid since my arrival. indeed such an impression did the terrible majesty of his countenance make upon my imagination that I have been in constant dread apprehension lest a [. . .] should be sent forth, forbidding me his states—what a an electric shock would be communicated from one end of his territory to the other, by the awfull “We Cocke by the grace of God, of Fluvanna Prince Lord of Cumberland, Defender of the Faith, do herebye make known to all our good subjects &c &c &c—

but for Heaven’s sake my dear Mama, laugh at this nonsense if you can, but do not let it go farther, for I am beginning to experience serious mortifications on this ridiculous subject—& I have been already held to the world as a fortune-hunter in petticoats,—this to be sure is beneath contempt; especially from the polluted source of Mrs Curl.

I am called on to finish my letter—Adieu therefore my dear Mother, love to all, and recommend my poor little Geranium to the girls. 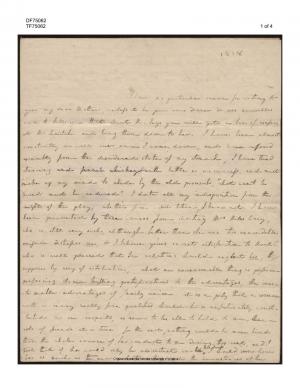