Your favor of the 5th I recd last evening I cant say with pleasure for it has occasiond a depression of my spirits greater than I have experienced for a long time altho I have been very unwell so much so as to be confined to my room for three days since I have been here but bodily pain is not as difficult to bear as mental—and it seems to be my unfortunate destiny not to be long at a time without having my feelings operated upon otherwise than by the common operations of nature when deprived of your Father I derived consolation in the hope that his Sons wou’d supply his loss to me, and so they have, in a great measure, but I have regreted the want of stability in your character, and system in your little arrangements and was pleased that you now had the opportunity of obtaining both, and that order and regularity wou’d in the course of two years be establish’[d] into habits, that wou’d eventually encrease your happiness, but, alas when my fondest wishes were about to be realized, a storm arises that I fear will banish all the pleasing illusion, and leave me naught but mortification and disappointment of all my visionary anticipations. I am sorry that your Capt has so little forbearance as to commit such acts of violence on the feelings of those he has to command like Zeluco he perhaps thinks severity necessary to make good Soldiers but I think it extraordinary that the Commandant shou’d shut his ears to all complaints, justice is due to every one, and I shou’d suppose that the most despotick Tyrant wou’d at times be disposed to hear and decide with precision and rectitude, I am afraid that your corps are inattentive to their duty and are refractory spirits, but you were an exception in that respect to most Boys I do not Blame you for taking a part in defence of any being that you see imposed on but I grieve that things have gone such lengths for what ever may happen Boys generally are supposed to be the Aggressors and I shou’d be mortified at seeing you under circumstances that might admit of an unfavourable construction. I left Mrs Higginbotham on the 26th of last month, call’d at Monticello and staid two days the family were well Cornelia and Virginia and the two Miss Randolphs from Ashton had gone down with their Aunt Cary to Carysbrook she was very sorry that she had not had the pleasure of seeing you and your Brother Mrs Randolph to give her the opportunity of seeing Browse after the Girls had been gone a week or ten days sent for him to escort them home he came while I was at the mountain inform’d me that three weeks before that he had taken a letter for me from his Gilmer out of the Post Office which has not yet reach’d me I wrote to him to beg that he wou’d come and get the letter and to call at the Post Office at Milton as I expected there wou’d be a letter there from you, but he was so fastidious that he coud not bring him self to solicit the loan of a Horse he dined with us yesterday and went to Bentivar in the evening with the two Seldens Garret and Duncan Quarles William Gilmer who arrived the evening before, I had spent the day at Docter Gilmers and was delighted to see him he came to pass the Xmass holidays among his albemarle friends he returns the first of Jany when his Father and Mother prepose coming if the weather continues fair we have had severe frost for the last fortnight creeks and Rivers froze even and I do suspect that the Boys are skaiting or I shou’d have seen them here this morning I received three weeks since a letter from your Dear Mother date 25th October they were all in tolerable health your Grand Mother Brown excepted she had been ill but was getting better Dumolin had been an was there Ill with his old complaints and a Dysentry she says she wishes he cou’d be prevaild on to return to his friends she also mention’d the correspondence that pass’d between Mrs R and your and your self on a particular subject, which she supposed I was made acquainted with, but she is mistaken, I can never approve of early engagements few of them are lasting and tho honor may bind to fulfil them, they often terminate in unhappiness, your Brother will no doubt write you a long letter he recd one from your Mother since mine but I dont recollect the date. I dont expect to get from here for some time tho they have been expecting me at Farmington I shall be stationary while this cold weather continues we are in the New House and of course comfortably lodged they wish me to spend the winter with them and I have many visits to make in this Neighbourhood if Mary Gilmer comes they will have Mr Burwells carriage and then we can go out without hazzard of taken cold I forgot to mention that Mrs Terrell Carr pass’d a day and night here in consiquence of being overtaken by rain her visit was to me and I promissed to visit her she gave a Party but neither Lucy or my self cou’d go, there, was but eight Ladies the next week the young Gentlemen gave one, and they cou’d assemble but 4 or 5 Ladies except the family at Bentivar Browse attended neither, you may soon expect to receive a letter from your Brother. This family unite in wishing you health and happiness, and believe me ever your affectionate Grand Mother 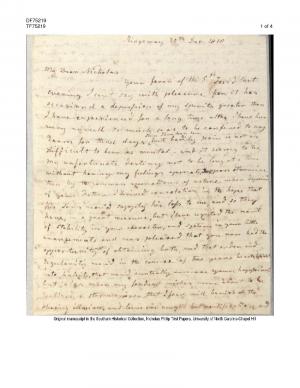