Whilst almost all the godly persons around me, are reading the Bible and other good books, I have seated myself to write to you my dearest Mother, having always entertained an idea that I could not better shew respect to my heavenly parent than by performing my duties to my earthly ones—or give a surer proof of gratitude to him, than by paying it where it is so justly due. I have been thinking a great deal of you all ever since I left Monticello, but particularly of my dear Grandfather, and shall be terribly disappointed if the servant returns from the post office without bringing me a letter, as I am very anxious to hear that he continues to recover; it appears an age since I saw him.

We had a pleasant ride (for journey it cannot be called) and on our arrival here found the house full of company Mrs Andrews (Miss Blair) made one of the party, and I was somewhat surprized when told, that this little old Lady was one, of whose talents and manners I had often heard, and whose hard fate had excited my compassion. it was well for me that common report had made me acquainted with her merit, for I might otherwise have judged of her in a manner to do little [. . .] credit to my penetration.

Mrs Miles Cary & Mrs Pasteur (Polly Ware) called on us the day after our arrival—the two Cary families are again on visiting terms—but whilst that fiend Mrs Curl continues thither withers every kindly feeling by her venomous breathings there can never be any thing like friendship, between them.

I was much surprized to find that dress is a great deal thought of & attended to in Fluvanna—Aunt Cary who has it at heart that I should do her credit by my fashionable appearance, has made me put my best cloathes in requisition, and lace and pearls have both been called in to procure me the honors of a triumph over the Fluvanna Dashers. these fooleries have cost me my little ivory fan which I fear is irrevocably lost.

if I had not had [. . .] some experience of a certain sort kind of adulation, I might have been more flattered than I am by the sort of curiosity, which I am told is excited on my account—I have been once or twice called on to shew myself like a wild beast, that such a one might “have it to say he had seen Miss Ellen Randolph” or directed to pay particular attention to anothers, because “they were terribly [. . .] afraid of me.” I would not mention these particulars to any one who did not know me too well to suppose that my self-importance could be increased by [. . .] them or that I should ever be in danger of giving [. . .] to these flatteries more than their just weight—but to you my dearest Mother I confide them with the certainty of their never reaching the ears of any one: [. . .] who might imagine them recorded by childish vanity, rather than unbounded confidence.

We leave Carys-brook to morrow and on Thursday, I hope to be with my dear Ann, whom I shall be delighted to see, although my pleasure will be damped by the recollection, that every step which brings me nearer to her removes me a greater distance from you, and puts it out of my power to receive regular accounts of my dear Grandfather—however on the 16th I shall be with you all again and [. . .] in the mean time I shall have the gratification of visiting relations whom I love, and who will be pleased by such a proof of my affection.

I have not done a stitch to my trimming since I have been here—my time has been spent lounging on the bed, reading Sir Charles Grandison and copying music—Aunt Cary had just received from Miss Peachy, the Musette de Nina of which you have heard me speak so often, and I am but the more convinced that it is an old air which I have heard you play in former times, and perhaps even latterly—but of which I have entirely forgotten the name—Aunt Cary and Aunt Jane are under the same impression, as they say the tune is familiar to them.

Aunt Morris has sent you (in one of Aunt C.s packets) a very superb cup and saucer, and a pretty one for Mrs Trist. Aunt C. will send them up by the first opportunity—she desires me to give her love, and say, she shall certainly see you this fall, if it is only for a few days. she tempted me [. . .] a little by the o[ffer of?] a dark Canton Crape which she wants to dispose of, a [. . .] I refused. [. . .] it is not handsomer than Leitch’s, which is more in my reach, if I were [. . .].

Mrs Cary desires her love to you. I shall expect to hear from some of the family whilst at Esterto. I shall reach it the 1st and leave it probably the eighth. any letter written after that should be directed to Carys-brook. as I have some fear that greater calls will be made on my purse than I was aware of—I shall be very glad if you can enclose me one a[. . .] note my dear Mama which will make my means ample for all my purposes.

My love to Papa and the girls and most particularly to my dear Grandfather. kisses for Sep. & George, & kind remembrances to Aunt Marks and the boys—also to Mrs & Mr Trist, if they are with you. as usual I have written an unconscionable letter but apologies will only make it longer. adieu my dearest mother—you need no fresh assurances of the unalterable affection with which you will by always remembered by your daughter.

I have just received V.s letter for which I return her many thanks and will write to her from Esterto—I am sp much delighted to hear such favorable accounts of Grandpapa that & shall leave this place with a much lighter heart than I reached it, and enjoy the company of my friends much a great deal more than I expected when I left Monticello. if you knew the circumstances [. . .] of noise and confusion under which this letter was written you would pardon it for being such a blackguard-looking scrawl. I think if it could be seen by any one “curious of my acquaintance” it would answer all questions much better than the sight of me can. for my reputation’s sake dear Mama destroy it. I had not time to write a short letter. 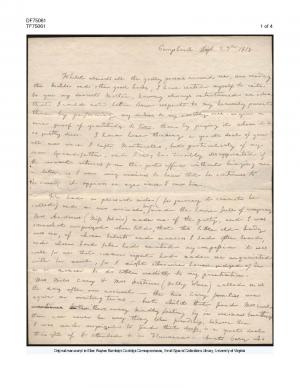