This is the last letter I shall probably write whilst I am in Richmond My Dear sister, & I must write as if for a wager, to be able to finish it in time for the post, I have just reciev’d yours & would not answer it at all but that such favours from you are so rare that they must not be neglected when they do come & I wanted to tell you that if you expect to find me a stylish lady you will be most wofully [. . .] disapointed, I have been twitted at least a thousand times since I have been here with my country breeding, & these have been in such a rage that at the boobies of this place should daring to take notice of it that even if I had [. . .] had any uneasy feelings from diffidence, that would have got the better of them, but really I never was more at my ease in my life than from the very first day of my arrival here at first I was so disgusted with the nonsense of the people that I sat silent from disdain as much as from any thing else, but I soon found that I should spend a most dismal time if I was on the high ropes the whole time I was here, besides which I found the people were not such fools as I thought them at first & that they only had a different sort of folly from what I had been accustom’d to, & getting accustom’d to every thing I have been very well content ever since, but now I am tir’d again & want to go home. at first I found the parties the most tiresome places in the world & that I should in all probability go away without getting acquainted with any one, for no one would talk to me because I would not talk to them I thought this was a very hard case but there was no help for it unless I should humble myself to make some advances, or at least when advances were made to me to show some inclination to get acquainted with the people who made them & now some young ladies & myself are very good friends when it suits our convenience, I sat near a young lady for about half an hour the other day, for the first ten minutes we sat in stately silence which might have lasted till doomsday for aught that I car’d, but she could f endure it no longer & tho’ she did not appear to like my looks any more than I did hers, she turn’d to t me suddenly with a most fascinating manner & sweet smile & ask’d my opinion on of something that she had just done m a moment before, I answer’d her as well as I could, but I am not quick at all at making or turning off a compliment so I never attempt it, & the girl tho’ she seem’d to expect one at that time was oblig’d to be content with out it, however as I did not say any thing repulsive she we enter’d into conversation & [. . .] before we parted were such good friends that we shook hands & promis’d to meet again very soon & often; I meet that same girl constantly but it happens never to suit her or me to recognize each other & we never have spoken since. I still found tho’ that I spent a great many weary hours, & that the easiest intercourse among the company was while dancing, so I determin’d that if it was possible for me to get over my indolence & dislike to skipping about I should pass my time more agreably, but another a great difficulty now [. . .] presented itself I had forgotten the figures of the reels & cotillons as entirely as I if I never had learnt them but this was not allow’d to be an objection at all by most people, so the last party I went to I persuaded myself to dance the gentlemen with whom I danc’d undertook the part to play the part of dancing master, & then past a scene which at least afforded me a great deal of amusement, my first partner Mr Nivison was quite as ignorant as I was & our case was only known to one other, Mr Wickham who stood behind & beckon’d & made signs only seen to us two who were dancing, I was still more diverted when I danc’d with Mr Wickham himself, & I had leisure to attend to his instructions & encouragement, I wish you had been there I think he would make an admirable dancing master, but I am sure I am very much obliged to him.

I am delighted beyond measure to hear that poor little[. . .] Trist has fallen in love with Elizabeth—[. . .] must fold up my letter for it [is]1 time to send it to the post office kiss dear Peg & Pat for me & believe yours affectionately 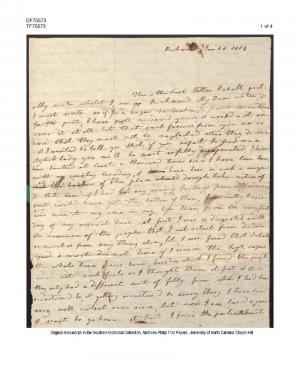