I cannot express to you my dearest Mother the delight your letter gave me. I had not heard from you for such a length of time that my spirits were beginning to fail and I was preparing with a heavy heart for a splendid party at Mr Lisle’s to night when your welcome packet arrived and dissipated all my fears and all my uneasiness. its contents were extremely acceptable, when I left Washington I fancied my funds very ample but my travelling expences, a thousand little articles of dress indispensable in Philadelphia with many little unforseen expences nearly has exhausted them in a short time and I had the horrors of poverty staring me in the face in a strange country far from “my ain friends and lan”.—Mr Bache at whose house I am staying is a brother of the doctors with whom you were so well acquainted and is one of the most pleasing and amiable men I have ever known. he married Mr Dallas’s eldest daughter and although not very wealthy they move in the first circle in Philadelphia. Mrs Bache is a charming woman, one whom I think you would like very much; she has been truly kind to me, and indeed although strangers have generally complained of the want of hospitality in Philadelphia I have had no cause to do so, for I have met with much polite attention from young and old. one of the most fashionable beau’s has attached himself particularly to me and is constantly at my elbow. he is not remarkably clever, and I should not consider his attentions very flattering in my own state —but here he the magic of fashion produces the same effects which as in London and as Lady Jane Grandville says “acts like the cestus of Venus.” this gentlemen has the reputation of talents and is certainly not without them although they have been overrated.—Grand Papa’s friends have been uniformly attentive to me. Mr Correa particularly so—he has been to see me, offered me his services as an escort to Baltimore when I wished to return, and also to go with accompany me any where in Philadelphia or its neighbourhood, where I could find amusement or instruction. he is besides in the habit of speaking of me in a very flattering manner.

Mr Short has been twice to see me. Dr Wistar called and invited me to his house. I spent last evening with him and when I was going away he gave me a most affectionate kiss. Mr John Vaughn in spite of my remonstrances has worried himself by hunting half the city to find Spanish books for my amusement, which will never be looked into untill I return home. these attentions from my Grand father’s friends flatter me exceedingly. three or four nights after my arrival some young men gave Matilda Dallas and myself a serenade. the band played two or three airs which they the gentlemen knew were her favorites, and then suddenly struck up Jefferson’s March this compliment was the most acceptable they that could have been paid me—I visited the Academy of fine Arts and saw Mr Alstons celebrated picture which has been the subject of conversation for several weeks past in the fashionable world. it is very large and has a great many figures; you must have seen a description of it in the newspapers. I was not disappointed in it but Mr Correa’s remark will give you a better idea of its merits than any thing I could say. he says “each figure taken seperately is good but that the artist has grouped them badly, and by so doing destroyed the effect of the picture.—The Museum I have visited once and mean to go again accompanied by Mr Correa when I shall probably gain a few more idea’s than on from my last visit. I enclose you my profile taken there, and said to be an excellent likeness. I have been more than a fortnight in Philadelphia and shall not leave it for some days. my visit to Baltimore shall be as short as possible I cannot express to you1 for I begin to sigh for home. to think that on the third of May I shall have been seperated from you four months—

I walked yesterday evening with Mrs Sergeant to see the house you lived in with Mrs Hopkinson. it is occupied by trades people and to the eyes of common observers has nothing to distinguish it but its air of antiquity. for mine it had many attractions, and I gazed on it with mixed feelings of pleasure and melancholy. I next visited what was once Mrs Houses boarding house, and then the spot where my grand father lived as secretary of state. I strained my eyes to get a distant view of his lodgings while vice President, and I do not think that I was have been as much gratified by my visit the sight of any thing in Philadelphia (not even the Museum, Academy, Schyl Sckuylkill bridges and Pratt’s superb green house,) as these now humble plain buildings which recall so many recollections of former times and are associated [. . .] in my mind with those on whom my fondest affections are placed.I have written as usual in haste and although the fashionable hour for visiting is past I am interrupted by the arrival of one of Matilda Dallas’s beaux whom it is decorous in me to see. Give a great deal of love to the whole family and thank my dear father for his present.Adieu my dearest Mother excuse this hurried scrawl and believe me to be when I [. . .] confe[. . .] you that the first wish of my heart is to be [. . .] again. 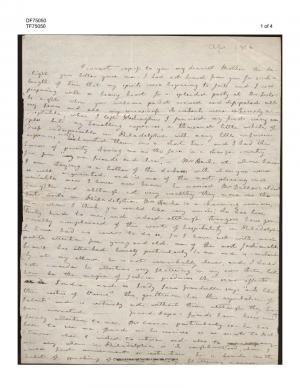