Your letter my dear Mother caused me a great deal of surprize and uneasiness. I recieved the letter containing the draughts four days after date, and wrote by return of post, to you, to acknowledge their reciept. by the [. . .] mail after ([. . .] which by the date of your last letter I find left Washington the very day on which you wrote it was written.) I enclosed the bank notes made up in two packets of different sizes and directed to Grand Papa in different hands. no precaution was spared to ensure their safety. I can truly say that I was not happy from the moment I recieved them the draughts untill the business as far as it lay in my power was executed, untill the notes were enclosed and in the post office. I tried very much to get notes of the Baltimore chartered banks as Papa thought they would suit him better, but I could not do this without paying a per-centage upon them which he had given me no authority to do. the draughts were on the bank of Columbia which is considered one of the firmest in the District; and to which the Baltimore banks are indebted, being are in its debt.

By the same post which carried the notes I wrote to Papa; I had obeyed his directions, they the notes were of the Columbia bank which after the Baltimore he preferred; they were of the number and size he wished, I carefully took down their numbers and letters, cut them all in two by a waving lines, enclosed them first to you and then under cover to Grand papa; in short just as he had desired.—I enclose Gales’s reciept, Milligan has not yet sent in his account although I called on him the day after I recieved your letter. he has not got Say’s work on Political Economy but will if Papa wishes send on for it to one of the northern towns.

And now my dearest Mother I am going to do a thing without having time to consult you on it, which yet I hope you will not disapprove. George and Matilda Dallas with Miss Pattersen a friend of the family go on the day after to morrow to Philadelphia. I proposed accompanying them as far as Baltimore; when Mr & Mrs Dallas suddenly concieved that it would be the most eligible thing in the world for me to go all the way with them and thus take advantage of the opportunity for visiting the real capital of the country; they urged me so strongly, made use of so many arguments & entreaties, so many kind importunities, and were so warmly joined by the rest of the family, and all my friends, including Mrs Madison, that I have suffered myself to be prevailed on. the plan is this. at Baltimore we embark on board the steam boat which takes us in 24 hours to Philadelphia. I shall stay there a week, long enough to visit the Museum, Academy of fine Arts, Theatres &c. &c. avail myself of the protection of some of those numerous respectable person always passing between Baltimore and Philadelphia, to return as far as the first; pay a visit of a few days to Mrs Smith, & return to Washington, where I can write to my brother to join me, and then straight home, or by Richmond, as his business [. . .] may direct. to all the arguments made use of to induce me to adopt this plan I could only oppose. 1st going to [. . .] a house where I was a stranger as George and Matilda Dallas will stay with their sister Mrs Bache; 2nd the difficulty of returning to Baltimore in case there should be no one going that way whose protection I might avail myself of. these were readily answered, Mrs Bache not only one of the most aimiable but one of the most & intelligent women in Philadelphia, fond of society and gaiety will recieve with the greatest pleasure a person invited to her house by her father, mother brother & sisters & accompanying the latter. Matilda and myself would occupy one room and one bed.

with regard to the difficulty of return, that was entirely ideal—, George and; Matilda Dallas offered at once to return with them me to Baltimore, and on my opposing this as being out of all reason, they demonstrated to me that between two such cities as Philadelphia and Baltimore I could never be in want fail to meet with protection of the most respectable kind. the expense also made me hesitate untill by reflecting, on the rates of travelling I became convinced that this could not be great. my wardrobe is ample. my curiosity my eagerness to visit this celebrated city you may concieve. I have been told that those Philadelphians with whom I became acquainted here, carried away favorable impressions with regard to me which they have communicated to their friends & that I shall find many persons well disposed towards me. there is to be a splendid ball on the fourth of April; we shall just arrive in time for it. Matilda & myself have even arranged our dresses. hers is to be white gauze and mine. my pink crepe with the silver trimming which is very handsome. our heads dressed by the most fashionable friseur we calculate on looking “out and out (as Lady LLanberris says) very superb.”—

Now dear Mother what do you think of all this, and more what will Papa think of it. I feel secure of Grand Papa’s approbation. but for him I could never have thought of it, for I should have had no means to execute the plan. he wrote to me to say that the sale of his tobacco afforded him an opportunity for encreasing my “moyens de jouissance” and God knows how much they are increased. I was my stock was reduced very low, the money I brought with me had frittered away I know not how. circumstances seem to have combined to have made make my trip expensive. the 20 $ thrown away by Harriet; the imposition of the Richmond Mantua Maker &c &c.

I sometimes ask myself if the pleasure I have enjoyed can compensate in any degree for the pain I have suffered on this account, and I must still answer no, for there have been times when my happiness was destroyed by these distressing harrassing thoughts. they have hung round my heart, embittered every moment of the day and kept me awake at night. the privations of my family contrasted with my own selfish gratifications. the trust reposed in me violated to a certain degree by spending in trifles the money which must be replaced for things of importance and which cannot be replaced without new privations for you, or new distresses for my father. at least this visit to Washington has made me acquainted with the faults of my character, impatience, indecision, [. . .] a want of confidence in my own judgement & opinions with an absurd reliance on those of an others; and a weakness which rendering me incapable of withstanding temptation, does not shield me from the bitterest self reproach for having failed where I should have been firm. let me add to all these a propensity to self reproach which makes me exagerate faults which errors that my calmer moments tell me are venal or altogether imaginary. I sometimes fear that this is in part produced by vanity, and is but one of the forms in which the monster disguises itself. that I should never do wrong, and that it is disappointed pride which causes that peculiar bitterness of feeling when I discover that I am perhaps [. . .] more prone to err than many who are considered my inferiors in point of understanding.—the new situations into which I have been thrown the new reflections I have been led to make, have made me better acquainted with myself than I should ever have become in the tranquility and monotony of a country life. there was so little to call forth my prevailing defects that they I might have [. . .], and examined only at a future period remained unconscious of them untill it was too late to crush them.

These are rather gloomy thoughts to be my travelling companions to Philadelphia, especially as I fear they may sometimes communicate a sullen sadness to my manners which may not be altogether agreable to my light hearted associates, one of whom is as happy as youth & cheerfulness can make her, & the other going for the purpose of being united to a woman to whom he has long been fondly attached. I must banish them as much as if possible. one part of my task is easy; I can forbear to think of faults which once known may be corrected, by time and exertion, but whenever I remember not of the expense to which I have put my father and Grand father and for which you and my sisters may suffer I gave you in one of my early letters an exact account of the manner in which I have my money had been laid out, leaving in my hands 80 $, which this I have spent I scarce know how; a variety of trifling articles which I wanted, & many which that I could have done without; Mrs Smith could get no [. . .] silk stockings in Baltimore, and the shoes she sent were some too small, some too large, only three pair that I could wear at all; the others I returned, except one pair which that I gave Mrs Todd. I bought one pair of silk stockings here, which with the two pair I got in Richmond have served very well. Mrs Smith returned me 42 D.s. 7 of which I have spent and two I lost in the discount of a bad note which that I got, I know not how. 33 $ remained. which this with the 100 sent me by Grand Papa constitutes my present stock.

I have written a very long letter and missed the post in consequence of it, of course you will not recieve this untill I have commenced my journey. Mrs Madison sends her love to you and desires that you will enclose your letters for me, to her, and then put them under cover to the president. this will be the only way to ensure their safe arrival, as I shall be not long in any one place. she promises to forward them. if Grand Papa has any commands to Philadelphia and will write immediately, how delighted I shall be to execute them. I will try & recover Papa’s book for him. Oh my dear Mother if I could only command funds to supply you with whatever you want, in Philadelphia where every thing is so cheap and so good. what a precious advantage is a command of money, if you would only send me a memorandum and a sufficient sum I would if necessary protract my stay to execute it. but alas I fear this will be out of your power: as it is, any thing within the limits of my little fortune, if you will only send for, I will get.

hurryed confused & incoherent as my letter must be, I have not time to write another. This has been the work of a day, I have been [. . .] several times interrupted by morning visitors. Matilda Dallas has been here and the second of April is fixed on for our departure.

Adieu my dearest Mother, write to me immediately for your letters are always precious. with the most unalterable love.
your daughter.

my letters meet no eye but yours.

Lady Llanberis [llanberris], a character from Sydney Morgan’s O’Donnel: A National Tale (London, 1814), regularly used the phrase “out and out” as a superlative. 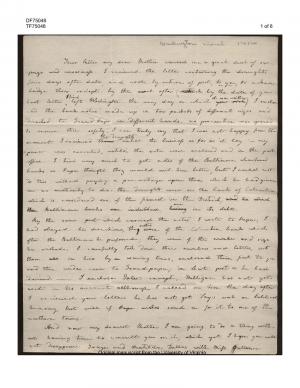