I thank you most sincerely my dearest Mother for writing as so regularly as you do, and I hope that you will continue to do it, and or whenever you are too much engaged prevail upon one of the girls to write if it is only one line to let me know you are all well.

Washington is much gayer now than it was when I first arrived, I have been to several evening parties lately and begin to feel my self quite at home. Mrs Madison is as kind to me as it is possible for any one to be, and I have a most sincere affection for her. the Dallas’s continue to pay great attention to me; Matilda is a lovely girl, just such a one as you would like, so artless & affectionate & uniformly gay. there is quite a circle of Philadelphians here, and I am better acquainted with and like them better more than any part of the Washington society. there are several young men from that city here amongst others a son of Dr Logan’s, who appears to be very good although not brilliant; Mr Norris, & Mr Milligan, this last is generally considered one of the first young men in Philadelphia, for talents manners personal attractions and fortune; I do not think him uncommonly handsome. and his manners even are not such as I admire; they are cold and formal; He sat by me for nearly an hour the other evening; of course I had a long conversation with him. his ideas were rational and his language correct, but I never saw a countenance so fixed and [. . .] immoveable. he appeared to take no interest in what he was saying himself, or what I was an saying to him, and to talk merely because silence would have been awkward. the only people in whose society he seems to take any pleasure are the Dallas’s. I am not surprized at his preferring them, for theirs is certainly one of the most agreable houses to visit at in Washington. I have dined and spent several evenings with them, the Miss Bayards are both fine girls, & Eliza Law has taken such a fancy to me that it would be really ungratefull if I did not like her.

I have been to the house of representatives several times; I find these visits sometimes productive of a good deal of amusement, and sometimes very fatiguing. I was most agreably entertained last night by hearing signor Pucci play on the harp; his execution is masterly and when he confines himself to pieces of music he gives almost universal satisfaction but when he attempts songs his voice is so bad as to destroy the effect of his harp.

Pederson has left Washington not to return for many months of course my dear Mother, if you had formed any proud aspiring hopes they must be all overturned. Daschkoff has gone also, to my great joy, for he tormented me very much whilst he staid, pretending to admire me more than any girl young Lady he had seen in America, and paying me attentions, very disagreable from a man of his character.

De Roth is an insignificant little creature, and Mr C. Hughes tells me is a man of no family or connections, a mere scrivener taken from behind a bureau, and sent here to give him bread; of course he cannot be related to your friend. Marshall Grucher has arrived here from Baltimore, he is very much attended to. by the inhabitants of the place. I was introduced to him in the gallery of the house of representatives. he told me he had a letter of introduction to Grand papa from the Marquis La Fayette.

Mrs Madison’s drawing rooms are always crouded and are by far the most agreable parties we have. at first I did not enjoy myself at them, but now that I am no longer a stranger but can walk about and speak to who I please I find them very pleasant. I do not think the city can boast of many first rate beaux, the collection is not very select but such as they are, there are a great many of them. the members of Congress are not generally speaking “not worth a lady’s eye; some of the most agreable are married men. I am not well acquainted with any of them except Mr Forsyth, who is very intelligent, gay handsome and a great lady’s man but as he is married & his wife said to be jealous, I do not like to have much to say to him; for although he is the most agreable man in Washington and I should enjoy his society very much, yet I never will if I can avoid it recieve any attention however innocent, from a husband which is to give pain to his wife. the first winter Mr Forsyth spent here no one knew he was married and all the young ladies were in love with him. he is uncommonly handsome, gracefull & elegant, his wife plain in person and manners; he is passionately fond of company, & society; she inclined to stay at home and take care of her children. She is evidently attached to her husband, and cannot help being proud of the admiration he excites, although it is whispered that she is made unhappy by it. I like her, and never fail to pay her as many little attentions as I can without t an appearance of affectation.

The first dinner party which Mr Madison gave after my arrival consisted almost wholly of members of congress, and I remarked one of them whose countenance and manner struck me as being uncommonly fine, it was open and intelligent, and there was had a decided character which was such as is not often met with. his whole person had an air of command and impressed me at first sight with a feeling of respect. he was farther caracterized by a lock of hair just in front which shone perfectly white among its dark companions. his name is Forney, he is a representative from North Carolina, was some time in the United States army, not so intelligent as his countenance promises, or rather his intelligence is not of the kind expressed in his face; he is perfectly solid but not at all brilliant. excellent as the nature of man admits. this is the character given of him by one of his old school mates; for I have formed no kind of acquaintance with him. I have met with him only once since, at the drawing room, where he seems to know nobody, although his appearance attracts attention. I have some curiosity to become acquainted with him, but as he always appears[. . .] also seldom goes out and keeps so much aloof, I shall he will probably never fill another half page of my paper.

The birth night ball is to take place next week. Mrs Madison goes to it and I of course accompany her. she has let me have a beautifull french silver trimming which I shall attach to my pink crape—the dress will be very handsome and I shall get Matilda Dallas or Mrs Cutts to dress my head it is an art they both excell in. the last evening I spent at Mrs Dallas’s Matilda insisted upon performing the part of a ‘friseur’ upon my head, she succeeded wonderfully, and I was astonished at the commendations which the family past upon the length, fullness, and as they said, the beauty of my hair. you know in my own family, or rather my fathers, it was not thought handsome, although of late they have acknowledged it was improving. Mrs Munroe & Mrs Hay called to see me and I returned their visit, but they have very little intercourse with this or any other family. the former has been very sick and is still confined to her room.

I can truly say that I have not had time to write you a short letter to day we are to have a large dinner party and I have scribbled on, always in a hurry, and often interrupted. I will as you desire me write to Jane and Sister, I have been intending to do it all this time, but I really have not leisure to write a letter which I must take pains with; and my mind is not often in a state which would allow me to arrange and methodise; although I love Jane dearly yet I should not like to expose to her eyes or any other’s such scrawls as are designed for yours. I have not written to Aunt Jane for the same reason. to Sister Ann I will write to night and to Cornelia & Virginia as soon as I can. if they knew the countless nothings which occupy my time and attention, they would pardon me for not having answered their letters.

Vanderlyn the painter is at present in town, he has taken excellent likenesses of Mr Madison, Mr Crowninshield, Mrs Munroe, Mrs Hay & and others. I would could not help wishing that I could afford to have mine taken, to be a companion for the one you have of Jefferson. they would hang so charmingly together in your little sitting room.

Give a great deal of love to Grand Papa and the whole family for me. kiss the charming Pet a thousand times for me there are are no parts of your letters which I read with greater pleasure than those which speak of her, and I am delighted to think hear that she still remembers me.—

Our dinner is at length fairly over, it is nearly ten o clock and the last of the gentlemen are some of them just gone. I am bathing my feet and take that opportunity to add a few lines to this already too long letter. Mr Sullivan the gentleman who married Miss Winthrope, Mrs Dearborn’s niece & adopted daughter sat by me at dinner and amused entertained me very agreably; he seems intelligent and aimiable. Mr Norris and Mr Logan were also of the party. of the latter I can now judge, having had a long conversation with him. he is not at all clever.

Mann Randolph was here a day or two ago to apply for his commission. he had obtained letters of recommendation from some other person besides Grand Papa, but Mr Crowninshield said “Mr Jefferson’s is sufficient” and promised him the first vacancy. Mrs Madison desires that you will tell Cousin Sam Carr that she has spoken to Mr Crowninshield, about a midshipman’s commission for his son John and is promised one. I suppose th He will have the second vacancy as Mann is to have the first. the Secretary of the Navy seems to think they will not have to wait long.—Mrs M & myself have had some conversation on the subject of the applications which you are forced to make to her. She understands your situation perfectly, and I think you need not be uneasy on that point. She desires a great deal of love to you; Mrs Cutts, Mrs Todd, Mrs Rush, Mrs Duval & several others, gentlemen and ladies, old acquaintances of yours, beg to be remembered whenever I write.

Adieu my dearest Mother—tell me if my letters are too too long, I sometimes almost fear they are, but when I once begin I never know when to stop. continue to write to me often, and believe that the strongest feeling of my heart is affection for you.

Scientific Dialogues may be had for three dollars. it is a new edition and the whole work which we had in six vols. is comprized in three. 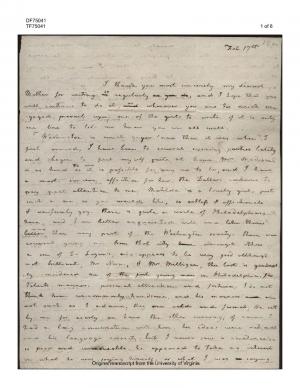