Your letter of yesterday making known your willingness to present yourself as a Candidate for the Senate immediately gives me great satisfaction. I am in the first place gratified in a public matter of very great importance; for most certainly I should without hezitation if the election rested on my single suffrage give it in your favour in preference to any man in the district whose services are at our command for that place post. I have just enough of that science you possess in so eminent a degree to be able to estimate its value & to know the rarity in our country as well as the necessity in our times for public men in whose character it is blended with Virtue talents & correct manners. I should only regret in giving the suffrage that it did not elevate you higher; allthough a station among 24 whose business it is to watch over the disorder and corect the views laws of 299 cannot be held low.

In the second place I am relieved from some anxiety about the probable construction of my own conduct. I had agreed to offer myself in the case only that neither Yourself in the first nor Mr Camm in the second reservation would consent to serve. From some expressions of Mr Tucker Coles I had hopes notwithstanding contrary assurances in Nelson County that you would yet come forward. Influenced by that hope I had yielded to my reluctance to such employment and to the urgency of private business and had absented myself from the March Courts in Buckingham and Amherst, by which I must have excited considerable dissatisfaction. If you had persiste[d] in refusing & Colo Monroe had allso refused I should have been compelled to give time to exertions in canvassing next month which the interest of my family would have suffered by losing. 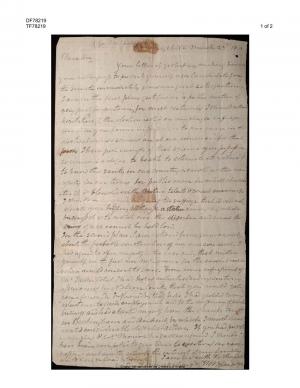