No change has taken place in my affairs since I last wrote but I cannot let Mrs Freeman leave this without a few lines for you—I have received letters from my fami[ly] in New York replete with affection and offers of friendship—they had only heard of Phils death by report—though Mr [. . .] wrote immediately on our arrival—Mr [. . .] Jones has [. . .] manner and made me unlimited offers of friendship poor man he lost his youngest Son yesterday a very promising young man, with an illness of twenty six days—he had all Madam Manig[. . .]s symptoms you will no doubt hear that Charles has gone to the Havannah with Mr Amory—there are various conjectures on the subject but very few who are acquainted with the real object of his visit—he went at the earnest request of Euphemia to make arrangments for her joining her husband, from whom she has recieved a letter wherein he appeals to Charles’s feelings and implores him to conduct his wife and child to him he could not refuse—When that is accomplished they part, never to meet again—Charles is one of my greatest sources of anxiety—he wrote to Mr L[. . .] two months ago [. . . .] discover whether he received the letter—Mrs Freeman has taken charge of three of Mrs Bache’s napkins that Sally packed up in a mistake I am totally at1 a loss to account for her silence which I cannot but think very unkind—I have received but two letters from you since we parted—remember me with affection to all your friends and be assur[ed] the moment my affairs are decided you shall know it—my Mother Harriet and the Boys unite in the kindest love— 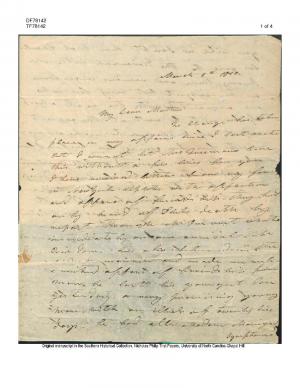