This is to acquaint you of with the receipt of your letter of the 12 of the month, containing the check which I immediately paid to Leitch taking a receipt for the amount. about 144 dollars remain to be paid. your next remittance will therefore clear you & leave you a few dollars in pocket. I am sure your heart will feel lighter when this debt is cancelled, & you will feel much more at your ease; do not however contract others.

I wrote to you on the 22 and gave you all that the news I could muster. But I did not tell you how domestic affairs were proceeding, that you may judge for yourself I enclose Fathers letter. I sincerely wish that he would purchase a sugar plantation or, that he would convert his into one, as I feel convinced that cotton will be his ruination if he continues to cultivate it. I heard Mr Randolph say that cotton might be exported from the East Indies and sold here for 10 cents—The cause of such a diminution he attributed to the invention of the Gin, the use of which in china was unknown until lately: which makes me think that we Americans, are the most ingenious & most inventive race in the world. I had no Idea that you had received but one letter from home since your stay at West Point. I think you must be Mistaken, that but numbers is pretty near the June total & past that I have received during the same space of time. We cannot however impute their negligence to want of attachment. that has been proved to be the purest and most sincere.

I am glad that you are well pleased with your school & that you are going on so well in Mathematics, for which I beleive you have a real taste and talent. I wish I could say the same of Myself in the case of Arithmatic, for which I affirm that I have neither genius nor taste but I hope the other branches of mathematics may accord better with my capacity. tell me why you give the preference to Hutton over the great Bezout whom Mr Jefferson admires so much, is he more plain, more perspicuous, does he throw more light on the subject, or what? I would be satisfied if I could form any reasonable expectations of Going through Arithmatic by next June, but curse the stuff I always get “les vapeurs noirs” when I look at it by the end of June, Princeton will, I hope, contain your most obedient, who is heartily tired with waiting for the University of Virginia, situated as I am in this hovel with a parcel of fools, fools, blockheads, numsculls, asses, any epithet for them which can express My hearty contempt and hatred (not all earnest) no more chance for studying here, than there is in the habitations of Satan. O how I will bless that day which will see me in some good room at some good college. the fact is that the university will not be ready in less than 5 years as all the funds are to be appropriated to building—I have heard nothing of Judge Cooper for a long time. I must end as I have nothing more to say—the Hell cats will come in presently and drive every idea out of My mind 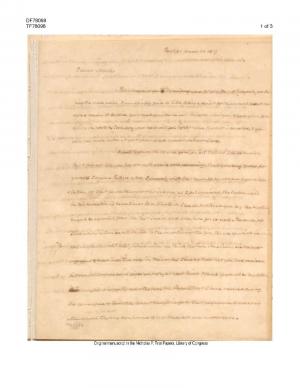