I cannot help feeling very uneasy at not hearing from you my dearest Mother. I have recieved but one letter from home since I left Washington and that was written by Virginia before you knew of my intention to visit Philadelphia. I am as you may suppose delighted with this city. I have recieved every polite attention from its inhabitants and have been easily prevailed on to lengthen my visit. indeed if I had reflected at all I might have known the impossibility of staying but leaving Philadelphia in a week. my time has been so much occupied by paying and recieving visits that I have visited seen but few of the objects most worthy of attention. I was yesterday on board the Franklin seventy four and know not when I have been more delighted than at a sight so novel (and for me sublime) as this immense vessel. Capt. Dallas accompanied me and explained every thing in the most obliging manner. from the ship we went to the gunners room where all the arms were arranged with an attention to order which produced a most beautifull effect. to day I am going to the academy of fine arts where I expect to be highly entertained. to morrow to the shot tower and the banks of the Scky Sckuylkill. the day after to the museum, under the auspices of Mr Correa, who has called on me twice. in short I have engagements for every day this week and every evening. at the end of that time I expect to leave Philadelphia. I have been interrupted twice in the course of this short letter by morning visitors and as I have to go out in the course of the next half hour I must bid you adieu saying that the more I become am acquainted with this charming family the more sincerely I become attached to its members. Mr & Mrs Bache Alexander, George, and Matilda Dallas appear (although entirely unlike each other) to be all equally deserving of esteem and admiration. pardon this hurried scrawl dearest Mother. if I have time I will write again in a few days give my love to all the family and believe me with the sincerest affection

I have seen almost all of your old friends Mrs Sergeant Mrs Waters, Mr Short Dr Wistar &c &c they all made particular enquiries after you. 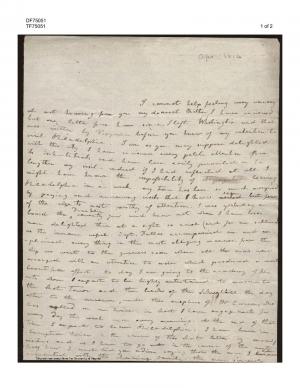