I expected to have left Richmond in the stage which carries this letter, my dear Mother, but Papa’s business will detain him some days longer; Virginia is decided to return home at the same time, as she does not consider that the pleasures of the town will compensate for the loss of the society of her family. indeed just now Richmond is any thing but gay and she could expect no amusement except what is to be found within the walls of the boarding school. We were all invited to a party at Mrs Roane’s the other evening, and the Miss Nicholases called to invite us to go with them and return at night to their house, as the distance from the other hill to this place is great and the streets very bad. nothing but my great anxiety that the girls should see a little of the world, induced me to accede to this proposal as I was certain feared the family would be put to some inconvenience by having to lodge so many of us. I thought however I knew the geography of the house, and that this inconvenience need not to be very great. and I almost regretted having given way to my inclinations when I found the general dislodgement which our party occasioned, & particularly as the girls went entirely from my persuasions, and decidedly against their own wishes. the consequence of this unwillingness was an utter neglect of the necessary preparations and although I exerted myself to the utmost, I could not anticipate all their necessities, and when we went to dress, there was such breaking of strings & snappings of laces, such pulling and pinching, and pinning, so many concealments to make, and so much time consumed in these various operations that I almost cried with vexation. Virginia was the best of the two, and her shoulders kept popping from under her corset and petticoats, so that by the end of the evening she was almost undrest. this was partly my fault, for in my anxiety to shew the turn of the shoulder, through a muslin frock, unencumbered with straps and strings, I pulled her cloathes too low. Harriet had spent the day reading a novel, and when she dressed in the evening found that she had packed up a petticoat without [. . .] a body which displayed to great advantage a thick [. . .] yellow looking flannel jacket with sleeves almost to the elbows, under a muslin frock. before the clock struck nine my young ladies were ready, and I having no time for my own toilet, bundl[ed] myself af up after the fashion of Mrs Morris to accompany them. Virginia was the best dressed, and much the best figure of the two, but the transcendent loveliness of Harriet’s face, excited I believe general admiration; that warmth of colouring, for which she is remarkable the rich, sunny curls which shaded her forehead, and the brilliancy of her eyes, which made her a subject for painting, whilst the a mixed expression of bashfulness [. . .] & playfulness and sarcasm rendered placed her countenance above the painter’s art. [. . .] Both of the girls acknowledged that they were not as much tired as they expected to be, but & that the evening passed pleasantly enough. there were no young men of any sort of distinction, indeed there are at present none in Richmond either natives [. . .] or visiters—Francis Gilmer even has left us to go with Mr Patterson to Georgia. I tried to make the girls regret Wilson Nicholas’s absence, but they obstinately refused to feel or express the smallest dissatisfaction on the subject.

Virginia’s teeth are done; there was so much to be done that it took two settings of more than two hours each. her mouth is liberally spangled by the number of gold plugs, and H. says glitters most beautifully when she opens it by candle-light. none of these plugs are immediately in sight. the front tooth is we hope saved. it is filed and filled, and looks quite well. the dentist separated her jaw teeth which were very much crouded, but did not draw one of them, as she seemed unwilling, though not positively refusing. three of Lucy’s front teeth were filed and plugged, but the fourth pronounced incurable. You will be a little surprized to hear that I actually summoned courage, for the drawing of one of the largest & firmest teeth in my head. I confess that when the instruments were fixed in my mouth just at the second which preceded the tug, that dreadfull second of expectation, that I felt as if my senses were abandoning me; but I had my fright for my pains for the tooth broke short; [. . .] what remained of it resisted five efforts, coming away in fragments, whilst the roots remained fast bedded in the jaw bone, apparently unshaken by the exertion. I never saw any one in such despair as the dentist. he repeated twenty times that he had never seen teeth so thoroughly brittle, and that his strength and skill were alike unavailing. [. . .] I wished as I was under his hands that he should finish the operation and extract the roots, but he advised me to let them remain, the gum would grow over them, and I should have no further trouble; his prediction appears to be accomplishing itself for the lancet wounds are rapidly healing. The operaton. long and tedious1 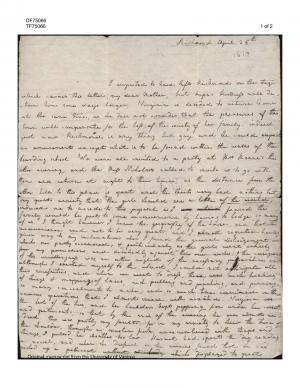