I have received letters from all the girls my dear Mother, and none from you, but I cannot let Phill go up without writing, and as I have so many debts, I must reverse the old proverb, and be generous before I am just.

I am at present staying at Dr Watson’s A few days ago, I came to visit Aunt Randolph at Dr Watson's, where she is staying, and being detained that evening & the next day by indisposition and bad weather combined, I renewed my old acquaintance with Mrs Watson almost entirely, and received so very pressing an invitation to spend a few days with her this week, that I complied with it, & came here yesterday; I shall remain untill to morrow or next days[. . .] I have mingled much more with the gay world than I expected to do when I came down, but I cannot say I have experienced any great enjoyment—I am becoming more and more sensible of the changes which my character and feelings have undergone. the buoyant spirit of childhood has deserted me, and in losing (in great measure) the nervous irritibility which so often embittered what might have been the happiest hours of life, I have lost the capacity of enjoyment, which is closely allied to it. I have attained a state of comparitive tranquility, but purchased by the loss of almost all the pleasures of society; company and conversation in which I once delighted, have lost their power to charm, & even the ordinary intercourses of life have become burdensome—

I might almost say that “man delights not me, nor woman either”. The Indifference which has extended its chilling influence over my manners, more than over my character, has produced another painfull effect. I frequently receive attentions which it is not in my power to return solidly, and I cannot now as formerly compensate for this inability by my powers of giving pleasure, for they have decreased in proportion as I have become myself more difficult to please. I am often gratefull and ennuied at the same time, and receive obligations from persons, who have not the power of calling forth those traits of character, which might afford an evidence that their attentions were not thrown away.

What Virginia says of her coming down for so short a time and of the difficulty which Papa would find in raising money to enable her to pay a longer visit, has distressed me very much. my spirits were not very light before, but they have received an additional degree of depression, from the idea that this gives me of the increase of family difficulties; and also also, I cannot bear to think that I have been in some way accessary to Virginia's disappointment, for the same money, or less than the money, which I have spent would have brought her down, and I begin to feel as if it were time for me to retire a little to the back-ground, and let my sisters have their share of those pleasures, which must be purchased with money.

There have been several parties lately, which I have attended. the first at Mr Pickett's large, and brilliant from the number of fine clothes, and fine flowers, each lady having as much geranium rose & myrtle in her head and bosom as would have filled a bushel basket. there was such a crowd, such a motley crew that the belles were quite lost; there was literally no room for dashing.

Margaret N. went with her friend Mrs Norton, leaving Sarah & myself to be escorted by Col. Robert. when we reached the door he offered us an arm a piece after the English fashion but Capt Peyton met us & took Sarah under his care. so that Col Robert and myself walked up the room very lovingly, arm in arm, to pay our respects to the bride, and back again where to a place where a vacant seat could be found. I could not help smiling at the chance which had brought utter strangers into a situation of such apparent friendship. we were neither of us sentimentally inclined or we might have talked of Sterne & Mde R—. but upon the whole, I do not think I am much like Mde R. and I am quite certain that Col. Robert was not cast in the same mould with Sterne. he certainly did not in imitation of this great model, take any pains to make me forget that this was the first time we had ever met on such amicable terms, but looked as if he was decided it should be the last.

the second party at Mr Sam Adams's was [. . .] remarkable for nothing; every thing went on in the usual routine—Mr Rootes paid me great attention, as there were but few of my acquaintances there, and he saw that his attentions could contribute to my comfort.The night before last I spent at Mr N. Nicholas's —a party given for Mrs Patterson and Miss Hollins who arrived in the last steam-boat. the hours passed pleasantly away—Mrs Roane one of my prime favorites kept me by her the whole evening, [. . .] amusing herself and me in various ways. at last observing Col. Robert at a little distance, and upon making some enquiries finding that after knowing each other by sight for years, we had never exchanged a word—the thought struck her, that two people of such amiable manners, must have been intended for each other, from the commencement of all things and the world. she actually screamed with extasy at the idea, which she varied and modified into so many different forms [. . .] to afford [. . .] an infinite degree of diversion to me.

Phill has just called and will not be kept waiting I told you in one of my last letters that your music books had not been paid for—these with the six dollar bill & some trifling accounts which Aunt R. mentioned to me, laces or some such things for the girls, make a debt of fifteen dollars due Aunt R. 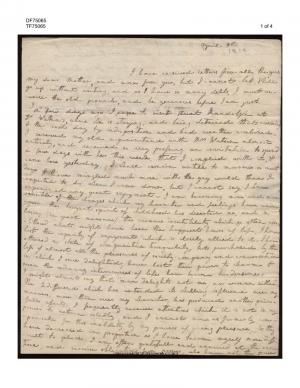