Mother received yours of the 11 of last month, and is prevented from answering it, by the same complaint, that she had in her head before the Birth of Browse, You will perhaps be astonished to see this letter dated from Baton rouge, but as thes vacation commenced at the beginning of this month, Father sent for us in the Gig and we were accompanied by Lewis Livingston son of Mr E. Livingston who intended to remain with us as long as we should, but as somebody has told Mr Livingston that this place was very unhealthy, he wrote him word to [. . .] go down again, and he left us a few days since. We are very sorry to hear that your health has been so bad and we hope that it will be perfectly reestablished. Father after expecting to have made 90 or 100 bales, has been very much disappointed and has lost allmost all his crop, and the cause of it is a small insect, that has an allmost imperceptible dart, with which he pierces the cotton boles, and leaves in the hole that it makes, an allm affluvia a juice that poisons the ball and occasions it’s decay. Grandmother Brown has been dangerously ill of a tipus nervous fever, and was not expected to live But she is now perfectly recovered. The coast has been more sickly than ever But the town has not at all suffered. I saw mrs Ross before I left town She was very well and intended to write to you.

The extreme pain of my head and eyes prevents me from saying more than that I have written twice since the letter you mention, Mr T— has also sent money to town to one of his friend to procure him a bill which I trust you will have no trouble with, the drawer of the other will not refund unless he sees the second bill if any accident ha[s] happened to it [. . .] in one of your letters that I [. . .] shown to him, I expect to be conf[ined] [. . .] first of next month, perhaps this [. . .] may bring it on sooner as I suffer [. . .] be afraid my d[ear] Mother that I nev[er] [. . .] to feel the attachment of an affect[ionate] Daughter for you. 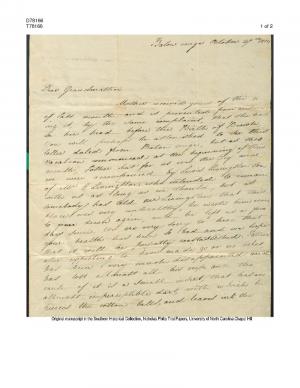