I scarcely know where to direct this letter, my dear Virginia, so uncertain am I as to the movements of my family. I should feel uneasy at not hearing from you, did I not know that in the bustle of a removal there is little time for writing. Mama, I hope, is in Washington; the 16 of October, here was a very bright and beautiful day, and I thought of you quitting the home of your fathers when, perhaps, the weather, so sweetly sad of the Indian summer, was in unison with your feelings. but it is best for you that you are removed from these scenes. they can never be again what they have been, & their neighbourhood only served to nourish the poison of sentiment which is preying upon you all. once away from a spot where recollection & association bound you in their powerful spells and the active duties of life will turn the tide of your thoughts, and new hopes new prospects will open before you; not of romantic happiness; the time is past for such dreams; but of the contentment which results from the habit of well regulated minds willing and able to enjoy and to endure. it is a fact, however that the most disinterested and self-sacrificing people are sometimes the least able to deny themselves the dangerous gratification of musing & melancholy recollection. they have relinquished so much, they think, done so much, and suffered so much, that it is hard they should be refused the luxury of regret. but the cup which they cannot dash from their lips is drugged; although the best feelings of our nature, our best affections are mingled in the draught, it is only the more dangerous, as it is the more alluring, for being so compounded. drink deeply and often if you would become useless, enervated, repining, unfit for the situation in which you are placed & incapable of it’s duties.—and after all whilst we look back with so much tenderness upon the past, it would be well to ask ourselves whether at any period of our lives we really enjoyed the advantages we now so deeply regret. at what moment have we ever been satisfied with the state of things then existing. the present is never what we like, and [. . .] the lamented past is but a whole, composed of parts, each one of which has in turn displeased us. at no time do we enjoy, an except by an effort of reason, the good in possession; and we regret in our bygone lives, [. . .] what k we should1 know from experience was [. . .] incapable of making us any happier than we are now.—

I think if you fortify yourself yourselves, against regret, which you may do in a great degree, against dissension which you may and must avoid altogether, against the habit of exaggerated feeling and expression, and of self reproach for unavoidable errors & ignorances, whilst you studiously cultivate the arts of content & economy, you may (not being discouraged by frequent failures, at first, in the exercise of them,) you may, in exile & mediocrity, be really happier than you ever were before. I say nothing of religion, but you know my opinions on that subject too well to require any repetition of them, and I would avoid the very shadow of cant.

What a grave wise common-place letter I have been writing to you, dear Virginia, telling you what you know, & every body knows so well; but there is a great distinction, and not sufficiently attended to, between this sort of knowledge in theory and in practice; a little of the last has fallen to my share, and I would willingly promote the same in you.

I have taken advantage of a rainy sunday to write to you with a pen (I wish it was a tooth pick) bad enough to discourage any one less determined than myself. to morrow I am hard at work again preparing for a removal from the house we occupy. we have outgrown it as literally as your little Martha ever outgrew a frock, and the depressed state of business &, of course, of rents, enables us for rather less than we pay now to go into a house which once commanded $ 1000. a year. Mama will recollect it, as occupied by John Rogers & his beautiful wife. it is a charming spot, arranged with every attention to comfort and elegance. gives us two parlours, or what you would call a parlour & dining room (with a grand china closet), a handsome library, bed chamber, separate & most complete dressing rooms, nursery up two pair of stairs, a sweet bright room for Mama when she comes to see us next summer, with such a store of closets, shelves, drawers, pegs &c as would almost enable us to live in it without furniture. the yard, though small, allows the children’s cart to turn, & the view from all the windows is fine. next sunday I hope to go to church from my new home. I quit this with but little regret, for local attachments are seldom contracted after the early years of life. tell Mama that Mrs Eliot, the mother, is dead, to the great sorrow of her friends, and of the poor to whom she was a kind and efficient friend. I believe I mentioned the birth of Mrs Ticknor’s son & Mrs Greenwood’s daughter in my last letter. Mrs Coles, of whom I spoke at the same time, was to have been married last week, and her wardrobe was spoken talked of for it’s great extent and elegance, when behold her father went to sleep a few nights ago & forgot to wake again. no body cares, except, perhaps, his children. he was a miserly old man & has le[ft,] I believe, a great deal of money. Mrs C— resumes her mourning attire, will be married quite privately & spend the winter in Washington where I hope you will know her. Mrs Edward Everett does not go on this year.—Mary says something in her last letter about the difficulty of dressing genteely upon such small funds as are at your disposal. this is a difficulty which throws a great shadow before it, but is, in fact, quite small. you will waste your little means, at first, but will soon acquire experience, & learn to make a better figure upon fifty dollars a year, than now you can could with a hundred. have but few clothes, keep them in constant repair, insist upon their being well washed & ironed, & learn to take care of them. avoid the trouble of a great many half worn, old fashioned duds, which will keep you always contriving and always shabby, remember that in dress, as in every thing else, there is a beauty of fitness, and that no one would [. . .] expect or admire any thing more than neatness & simplicity in the daughters of a decayed family. Farewell my dearest sister, if my anxiety to be of service to you has lead me into something of dogmatism in my advice, ascribe it to it’s true cause. I have seen more years. and more of the world than you have, and feel as if I had a sort of maternal right to offer you the benefit of my experience. a great deal of love to all, & kisses for your dear little ones. my own darlings are well. remember not to let mama expose herself. Mrs Eliot’s death was entirely in consequence of cold caught in her garden. once more adieu.

Joseph offers his affectionate regards to all of you, and most particularly to Mama. he desires me to say that there is a chamber in our new house called by her name, & ready for her reception. he means, as soon as the bustle of our removal is over, to write to her, partly on business, touching the pictures books &c [. . .] in his hands—give my love to Nicholas he has lost a great deal of money lately, and we shall be under the necessity of economising quite as closely as you can do. give my love to Nicholas, and make my peace, if you can, with the Vails. 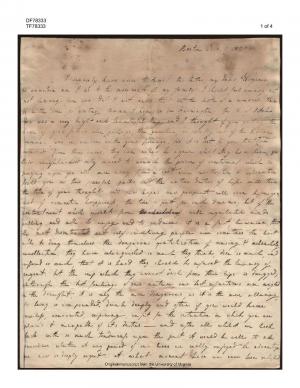