The box arrived safe yesterday evening, my Dearest Sister, and its contents were received with universal satisfaction by all from brother Jeff down to your rosy name sake. the children were clamourous in their joy when the various presents for them were distributed; the larger girls equally pleased with their books, & Brother Jeff & Nicholas with the knife, waistcoat & book. we sat up an hour later than usual looking at the beautiful engravings, & seals & looking over the books & finally dividing them amongst us. & I am now charged with the thanks of every member of the family. Sister Jane particularly sends her love & thanks for the book, engraving, seal & frocks. we all agreed in thinking little Pats frocks the prettiest th we had ever seen, & she appeared to be of the same opinion this morning when we tucked up her long petticoats & tried one of them on her, from no peacock ever admired [. . .] his plumage more than she did her frock as she cast her eyes down on [. . .] it. the pink callico is exactly the right length the frill just resting on her instep. the others will answer exactly when she first throws off her long clothes, & I will afterwards shorten them a little. I feel very impatient to see her out of these long petticoats, which I am sure make the child very helpless, she can neither stand alone nor crawl and will be a year old the 8th of this month. but I never before knew so unpleasant a spring; some pleasant weather in March is all that we have had; April was cold, windy wet and windy; and this morning there was a fall of snow & hail & rain that lasted an hour, blowing all the time a gale from the North east. the fruit trees [. . .] bloomed more abundantly than I ever saw them before, & give a greater promise of fruit, but it has been saved only, from perishing, by the clouds & wind which have accompanied our coldest nights. we almost wish that it had been killed, on account of the annoyance it will occasion us by the encreased number [. . .] of visitor's at Monticello. the vulgar herd that flock there on sunday, have already behaved so badly that Brother Jeff intends to forbid any one's going there on sunday, thereby keeping away those who do not know how to behave them selves, without interfering with the visits from the of our neighbours, or for those of strangers. he intends also to [. . .] employ some respectable white man to take care of the place; and James is now putting an enclosure along the upper roundabout. Burwell has given many proofs this winter of attachment to our family, as well as to the Monticello. he has staid there ever since the [. . .] sale, and appears to have taken pleasure in trying to keep the house clean, and even the yard he has attempted to keep in some sort of order. Nicholas accompanied old Willard up to Monticello a few days ago, and the sentiments of veneration that the old man expressed for Grand-Papa have sunk deep in our hearts. I believe that Cornelia mention'd the visit that Mr. Sparks paid to this neighbourhood the last time she wrote. we were all sorry that it was not better timed, for Brother Jeff was absent from home, & Nicholas did not think himself at liberty to show Mr. Sparks the paper’s, which brother Jeff says he would certainly have done had he been at home Sister Jane has been in “sack cloth & ashes’ [. . .] at her not inviting him to stay to dinner the morning that he called here; she said that She knew the etiquette was to invite him the next day, and She recollected that if he dined with us that day that none of the gentlemen of the family would be at home, & She did not know that he had walked here, and that the clouds which had been very dark all the morning were beginning to discharge a light shower more refreshing to the earth than to a traveller. however, She sent a horse for him the next day; with and a pressing invitation to him to come & stay here until Bro: Jeff: returned, by Nicholas who went to see him. I had resigned my room f and taken of one of the girls appartments, and they crowded into the other, thereby enabling us to accomodate Mr. Sparks; but when he heard from N. that he could not see the papers in Bro: Jeff's absence, he went away promising to return if it was in his power to do so before he went to Boston.

A years separation from Mama is a sad thing, as you know by experience, my Dear sister, but none of us can say that we regret it on the present occasion because there are so many reasons why it is best She should be absent from home now, and her society will be a great comfort to you during the ensuing months of discomfort & mal-aise; although your excellent Physician & nurse, will renders her being with you as She says a “thing of sentiment” more than of utility. Aunt & Sister Jane both say, that your next confinement will be attended with infinitely less suffering than the last; and as they have the wisdom of experience on this subject I rely on their opinions.

as she now does. her enquiries after Mama & yr.self are very particular always. She says that Tim promised to write her a letter. Aunt Marks's “cloven foot” has been put forth so often lately that both Br. Jeff & Sister Jane declare that they have an insight into her character they never had before. Mrs. T. has battled it out with the children thro' the winter, & seems sick & disgusted with us all. She has had [. . .] a singular attack lately something of vertigo coming on so badly that She could not stand, accompanied by raised pulse, & flushed face; & complains of constant head-aches.—I have scarcely left room for the various messages. 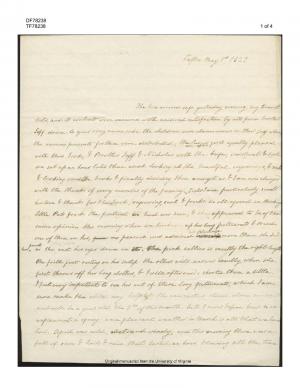