Your letter was received not quite a fortnight ago. We had been wondering that you did not write, as you had said in your letter to sister Ellen that you were going to write and you had never answered my letter sent you by Algernon last summer. It is no wish of ours that our intercourse should be interrupted. “Blood is thicker than water” with us too, and as far as possible we will bear, sooner than break with our relations. It is an old saying, however, that “you cant eat your pudding & have it too,” we have never wished to have our fate separated from that of our countrys—every step that she took we have justified—in her struggles she had all of our prayers & hopes for her success—our fortunes and our young men were cheerfully given up to support her armies & fight her battles—we believed conscientiously that we had taken up arms as the last hope of saving our liberties & defending the faith of our fathers—and now amid the general wreck of both fortunes & liberties—when we see all old landmarks swept away we feel more than ever how right it was for us to have made a manly effort to resist, even tho we have failed—we loved our cause with all the passionate ardour normal to people living in a southern clime & persons believing that we were misguided traitors who deserved all the sufferings & injuries inflicted on them us could not expect old feelings for them to be retained—regret the estrangement however much we may. If I had a brother who thought our subjugation right, I should feel myself more closely drawn to any stranger with southern feelings than to him—and this is the feeling which we consider it our most sacred duty to keep up and which from morning until night we are instilling into the hearts of the children of the house—in their nursery tales & rhymes “Yankee” has taken the place of ogres & wicked fairies and all that is vile & despicable—And now my dear aunt that I have shown you the intensity of our feeling I shall never again introduce this sad subject and only add that if you could hear father talk you would think me mild in comparison with the bitterness of his feelings—he has no hopes for the future, but except for our failure. no regrets for the past—You are not to think now, that we have any other than affectionate feelings for any of you, for we have loved you too long and too well to think of you in any other way than as our dear, good aunts.

I cant tell you what a constant source of trouble and annoyance fathers inability to send you any money has been to us all this whole fall—we had [. . .] hoped certainly to send you part of your interest at least—but having to restock the plantation, being obliged to have repairing done after the wear & tear of four years and to pay wages now to our servants swallows up every cent & leaves us scarcely enough to furnish us with the bare necessaries of life. Father hopes, however, in a week or two to be able to send you one or two hundred dollars—You said cousin Algernon had told you that your money was safe—it is safe because because father of course considers himself bound to you for it—but every investment which he had in stocks &c was lost and all that we have left in the world is the plantation. Aunt Mary has three or four hundred dollars in an Insurance company in Ch:ville which though unsaleable now is good and the company expects to pay a dividend in July next. After the pinch of this year is over I hope you will never again suffer as you now do from the delay in receiving your income—Farming here is considered an experiment now under this new regime, yet there is no repining and every one is determined to give it a fair trial. Now that the excitement of the past four years is over, and for us, all but honour is lost, the men of the country can only find comfort in hard work & they have set to work to rebuild their shattered fortunes with an energy & determination which redounds as much to their honour now as their gallantry did in time of War. Lewis lives at home and has charge of the plantation under father—he is constant & untiring in his energy and we already begin to see the good effects of his good management—The life he leads, though, is utterly & entirely distasteful to him, and if father were ten years younger I do not think any power could keep him in this country. He and Mother are constantly wishing they could move out of the country—but I love my home & state too dearly for that, and things will have to be worse for us than they now are even, for me to be willing to give them up—I am sorry you have so much trouble with your servants—how different from our faithful blacks who are so devoted to us that we cannot get rid of as many of them as we ought. They have never been more respectful or [. . .] willing to work than they now are—Anderson’s health has broken down entirely and he is now a confirmed invalid and at times a great sufferer—Sidney & her family are to be moved out of the yard and will live in a house just built for them on the top of the mountain—Our greatest trouble is in [. . .] easing off the large families—Old Minerva died several years before the War and Burwell the second year of the War—we were all so sorry that we did not think at the time of having him buried at Monticello. The old place is in the hands of the overseer who Levy left there—I believe it is undecided whether it belongs to the U.S. Govt or to Levy’s brother. I got from there that little alabaster lamp & a mirror just the size & shape of the arched top of the one in the dining room here—Wilson has moved down to his farm to live where he has fitted up a very humble dwelling for himself & family. In spite of my protestations to the contrary they will not call the place “Chapel Ridge.” 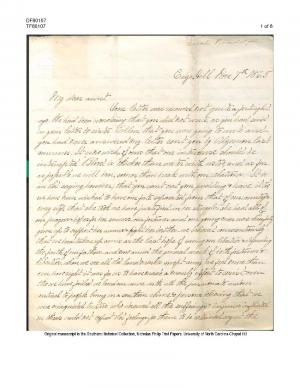