In my hurried retreat from the ‘old homestead,’ I omitted to procure the description boundaries &c of the Lot whc I sold to My sister Eliza, and as you are her agent in business matters, I write to inform you of the cause of delay in forwarding as promised, the relinquishment of Dower. Send me a copy of the description &c. & as soon as it gets to hand I will mail the Relinquishment properly authenticated. I had, as you may have heard, quite a prosperous journey out with the negroes, without any accident, and at much less expense than anticipated, $2250 covering the entire amt including Ramberts pay, and in five days & nights with a stoppage of six hours only in traveling reached the extreme terminus of the G. & Gulf R. Road in 35 miles of home. I left M. in a snow storm, but emerged here in the balmy atmosphere of spring! Would that I had found the human elements around us as quiet as the physical! But our village City was full of excitement. The hard fought battle of Oluska (150 miles East) had just come off, & the town was filling up with the wounded of both sides, and the yankee prisoners & wounded white & black. Nothing else could be thought of or cared for. And the anticipation of another conflict even, for the moment was forgotten. It is true the fight was a signal victory for us, but not complete, from not being, as usual, followed up. The entire force of the enemy must have fallen into our hands an easy prey, but for the stupidity of the commanding general, Finegan, who stopped the pursuit too soon. such is the best accredited report. But Finegan lays the failure on the commander of the cavalry Col. Smith, who refused he says to go forward when ordered. so it must end in a court martial. But be it as it may, the enemy reached his gun boats & is now reinforced; & as we are well prepared, and Genl. Beauregard here in person, with our new Genl. Patten Anderson & Genls Colquit & Tallifero & Gardiner all fighting men, we are looking every day for another Battle & I trust not without favourable results.

I found my son Nicholas at home, and he remained with us until yesterday when he returned. I mentioned to him what you told me of yr. application in his behalf at the War Departt and he much regrets that he was not aware of it: and with his thanks, desires me to say, that if you can even now get the commission for him he would like much to return to Virginia A first lieutenants commission in Cavalry or infantry, or a staff appt (the first preferred, but either wld be accepted) would enable him to resign & be transferred, and he would be most grateful to you if you can procure either for him.

Do not forget when you have the opportunity to enquire whether T. L. Banister ever held a higher commission than that of Lieutt from the war department. He was arrested in Savannah for wearing a Cols uniform was unable to shew his Comn and is now figuring in Va as a brigadier in the Florida service by appt of the Governor whc appt of course, he never held—or any other from the Govr

I sent you, & bro’ Willie by Mr Rambert some seed of the African Sorghum. It is esteemed by the Georgia planters above us as very superior to the Chinese. It is larger & requires more distance (4 ft x 3 & 4 stalks in the hill the distance most approved) and the juice yields more sacharine matter. It is preferred both for syrup & rum & bears a very heavy head of seed whc is much esteemed for hogs. It mixes readily with the other & with broom corn & soon degeneates if planted near. My best love to my dear Sisters Sarah & Eliza & Mary when you see her & my dear Aunt Matilda, My dear Sue and the boys. Jane & Betty join in love to you all—love to Willie & Jack & family—very truly & kindly yrs

(Tell my dear Eliza my next letter shall be to her. Jane & Bettie have both written to her or I shld before this. I think the girls are pretty well determined to visit you in the Spring.) 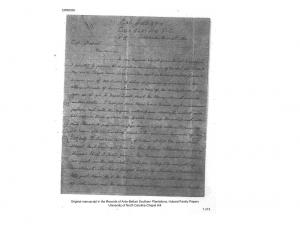