I dont know what Jane wrote to you about the General’s resignation, so being here at my office, my work over and nothing to do for an hour, except to wait to see whether my new master Genl Smith (“Sec of War ad interim” an office of the Presidents creation) has any commands for me, I feel too full of gloom and discontent, not to pour out some of it. I feel gloomy not only because a friend whom I admire and value has been compelled to adopt a step of such importance to himself,—and which sunders relations so agreable to me—but because I fear I discern mischief to the cause and country of which this event may be the cause—and still more, the index—

In itself it may not be a very vital matter that someone else than Genl Randolph shall be at the head of this vast machine upon whose systematic, and vigorous working so much depend—but for it to pass from the hands of one thoroughly conversant with it, to one who has all to learn—from one who has constructed a great index of its most vital arrangements, to those of one who has to find out what the parts are, and what their functions.

And then, where will the President find a Man who will take the office on his terms?

I dont hesitate to say that I would make a fair Secretary of War on such conditions—so far as administration goes. for I could see him every day, get his views, and write and appoint accordingly—

Genl Randolph could not have done otherwise Yet how deplorable, that he should have been put into a position in which he was obliged to do the country a serious injury for the present at least—I forbear to go into the special circumstances. You will learn them from him, when he goes up, as he speaks of doing, to Edgehill—The point of the thing is that the President formally and in writing required him, to give no instructions to commanding officers except through the Adjt Genl—to appoint no commissioned officer—direct no movement of troops—give no instructions, except after previous consultation with him—

One has to bear in mind that there are some 15000 to 20.000. commissioned officers to see the force or rather the folly of this—that what goes through the Adjt General’s office, is ventilated through an indeffinite number of hands—and this is to apply to the confidential instructions regulating future movements that a company cant be transferred from Manchester to Richmond—nor an officer of the lowest grade, a Qr master on coming at a village, appointed or ordered on duty—without a previous consultation, which at any rate, about matters of consequence absorbs the heart of the day—

The long and short of it is, that the Govt is impracticable on any such principles.

If It is gratifying to us, that some infusion of individuality into the War Department marks the era of this struggle, which converted an armed, and dissolving mob into an army—is precisely coincident with the transition from a series of disasters which lost us a third of the confederacy, to a series of triumphs which have, challenged the admiration of civilized mankind—and that the entire administration of Genl Randolph has blazed with the honors of Jackson’s splendid Valley campaign, and Lee’s around Richmond and on the Potomac—the defence of Drewry’s Bluff and of Vicksburg—the transition from armies of 40.000. (J. E. Johnson’s) and 135000 (A. S. Johnsons) to 80.000. in the East, and nearly as many in the west—that meanwhile there has been organized an efficient Engineer Corps—a Bureau of Nitre & Mining—which has developed the domestic resources astonishingly—the Signal Corps—And the Ordnance Corps put on a footing to be of some account—in the production and preservation of Arms and munitions—And these things the Country will remember—

I told Genl Howell Cobb at Suffolk that I regretted that Genl R. accepted the post because we had to suffer the disasters which were incident to the state of things which then existed—They stopped at that point—The Conscript Bill which was put down the President’s throat as you give a quinine pill to a sick child—saved the Country for this year 1862.—Without it or with it delayed one month we would have ceased to have any Government this side of Washington—But I am garrulous Love to all. We are well, except Alfred who is much complaining— 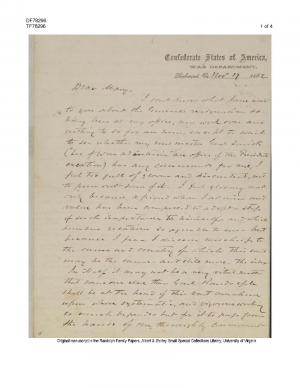