My great grandfather “Nicholas Trist,” (Son of Browse & Elizabeth Trist of the town of Devonshire England) came to America during the Revolution, and was Lieutenant in the “Royal Irish” of which his brother Browse Trist was Col at Bunker Hill My great grandfather married in Phila a Miss “Elizabeth House,” she was a woman of much ability, & was known to, & respected by, Mr Jefferson Mr Monroe, & James Madison; these gentlemen all were her friends personally, and corresponded with her. she had one child a son “Hore Browse Trist” born17, he was educated partly in England where he visited his cousins at the old Trist Estate of “Bowden” in Devonshire, he married in Phila 17 a Miss Mary Brown, a great beauty and a lady of ability, whose mother “Catherine Colquohon” (Calhoun) was of Irish birth & descent, the family being descended from the Earls of “Lennox” “Lennox” she married a Mr Brown & came to America (U. S.) where she had a very large family of Sons & daughters, her daughter “Mary” married “Hore Browse Trist Esqr” he moved to Va their eldest son Nicholas P. Trist was born in Charlottesville Albemarle Co Va June 2d 1800. the second sonHore Browse Trist Jr was born in Washington D.C. 1802 they had no other children, my grandfather bought the Estate of “Birdwood” near Charlottesville Va where he lived until Mr Jefferson appointed him 1st Collector of the Port of “New Orleans,” after the purchase of Louisiana, 1802, he sold “Birdwood” & removed to La where he died 1804 of Yellow fever; his wife remained in La where she married Mr “Philip Livingston Jones” of New York—he died in a few years leaving no children, he requested that my father should take his name “Philip” which accounts for the P in his name which had been “Nicholas Trist” after his grandfather. My grand-mother after some years married a 3d time A Mr St Julian de Tournillon a french gentleman, who had been saved by a faithful negro from the “Insurrection in Hayti” & brought to La my grandmother had two Children by this marriage Mary de Tournillon who married Dr Thomas Cottman of La & “Julian de Tournillon” who married 1st a Miss “Landry” by whom he had 3 children “Rosella Tournillon,” & “Ada Tournillon” & a son “Julian,” always called “Tournillon.” Rossella married a Mr “Montgomery” of N.O. “Ada” married a Mr “Dick Bond” of La, she has a son, & Mrs Montgomery has a daughter, my uncle Julian “de Tournillon” married a 2d time a Miss “Pediscloe” he had had by her several sons one named Nick, & one Browse I believe, what became of “Julian Tournillon” the son of my uncle’s 1st marriage I never knew.

My great grand mother “Mrs Nicholas Trist” née “House”, was living lived for several years with her mother, My great grand father having almost immediately soon after his marriage given up his commission in the British army, & removed to Louisiana then belonging to “Spain”1 & which was of course “neutral ground,” there he purchased an Estate & prepared a home for his wife & child; in 187 my grandfather being then a small child two young to undertake such a journey my great grandmother left him with her mother in Phila, and set out on a long journey to join her husband in La there is a Journal kept by her giving an acct of this winter journey to “Pittsburgh” on horse back—my great grandmother took with her a young cousin her mother’s niece “Polly Stretch” afterwards Mrs Sprogell (mother of Mrs Peaco, & Caroline & Mary Sprogell) “Polly” was a brave & [. . .] an unselfish girl or she never would have consented to the hardships & the perils of such a journey. They rode on horseback to “Pittsburgh” taking 3 weeks for the winter journey, they staid at “Pittsburgh” all winter having while a flat boat was built, on which they were to go down the “Missisippi,” they left in the Spring, and after weeks of perils from Indians, & from “Snags” in the river, & suffering from heat & musquitoes, they reached Natchez where my poor great grand mother heard of the death of her husband three weeks before; the shock was so great that she fainted and was so long unconscious that they almost despaired of her recovery; but the brave woman rallied & continued her sad journey, she arrived at last at the “Home” prepared for her, where she found every comfort & elegance of the time; even a trained riding horse which came neighing up to the piazza to receive the lump of sugar which the servants told her, “Master always gave him, saying “I hope soon that your mistress will be here to give this with her own hands.” Mrs Trist & her young Cousin Polly remained two years on the Plantation, & in New Orleans, before Mrs Trist could settle “matters.” she wrote to Mr Jefferson saying “that she should lose so much by “exchange” of currency “that she should not carry away from Louisiana as many dollars as her husband had brought pounds.

Finally after weary delays Mrs Trist & “Polly Stretch” sailed in a Spanish vessel for “the Havana” where they were detained three or four months, waiting for a vessel to take them to “New York” which they finally reached, having escaped the “Algerine Pirates” which then infested our waters. Mrs Trist kept a journal during her stay in Louisiana, and giving an account of her story in N.O. & her sea voyage to Havana; her experiences while there, & her “voyage” to “New York” this journal with all of her letters & papers were left with her niece “Mary House” who married “Mr Peachy Gilmer” & lived at “Pen Park” in Henry County “Albemarle” Co for some time; cousin Emma Gilmer (Mrs Breckenridge of “Grove Hill” Botetourt Co) wrote me that two trucks of my great grandmother’s papers were burnt by the “Yankees”; but I hear that some of the “Gilmer” family have numbers of letters addressed to my great grand mother by Mr Jefferson , Mr Madison & Mr Monroe & other men of “Eminence,” and Cousin “Emma,” says her “Journal” was deeply interesting & most romantic. Those trunks must have been mines of interesting matter, and probably of valuable relics in the shape of St Memin’s Copper plates, & his miniatures of many Interesting persons; I wonder that my father never claimed her papers! which contained all her letters from her husband & son. I have one of my great grandfather “Nicholas Trist,” but none of my grandfather. “Mrs John Gilmer” who died at the “Louise Home” in Washington within the last 10 years recovered some few of my great grandmother’s papers, which she gave me. My great grand mother died at “Monticello” when I was two years old 1828 she is buried there, but I do not know in what part of the grave yard she was laid. I have letters of her’s written to her grand sons “Nicholas P. Trist” and “H. B. Trist,” when they were youths in La living at “Bayou La Fourche” with their mother & step father “Mr Tournillon,” my father attended the “College D’Orleans,” where he recd some prizes signed by “Mr D’Avezac” the President of the College. My father came to Monticello when he was 17 to go to the “University of Va,” which not being yet opened “President Monroe” gave him his a “commission”2 for “West Point,” & he had to take it “from La” altho born in Va, because Va had her quota of Cadets at “West Point.”

My great grand mother never returned to La she [. . .] lived at “Pen Park” with her niece “Mary House,” and at “Birdwood” Albemarle Co, and she boarded afterwards at Mr Diver’s “Farmington” Albemarle Co; her letters are dated from all of these places—she must have lived with her mother Mrs House Phila & also in “New Jersey,” until after her son “Hore Browse Trist” was grown and married, soon after which he must have moved to “Charlottesville” where my father “Nicholas Trist” was born my great grand mother “Brown,” accompanied her daughter to La where many of her children lived married & died, she did not out lived my “grand mother,” who died in my fathers arms; he had been sitting by her all the evening at the tea table; & she had spoken to him of the satisfaction she took in his engagement to “Virginia Randolph” for my grand mother Trist, had a great love & admiration for my grand mother “Martha Randolph”—they were old friends and she said to my father “it will be a great comfort to me when I die to leave my “little Mary” to be brought up by your wife Virginia Randolph.” soon after this, my grand mother retired & my father was sitting reading, when Mr Tournillon came in hurriedly and said “go to your mother she is ill,3 while I send “Browse” for the Dr;” my father hurried to her room, & found that she had stepped out on the Piazza, he went immediately to her, she requested him to help her to her bed, but she died in his arms, before she reached her room; she had great beauty and a very superior mind, she had brought my father & uncle up with the greatest care, instilling into them, the highest principles, and great devotion to each other; they never seemed to know or feel any seperate interests; she also trained them to have the most remarkably “easy graceful manners,” for which they were noted as children, and as men; she taught them to cultivate their hearts as the greatest source of happiness; after “honor & integrity;” they absolutely idolised their mother, and next to her they loved each other; my father always said “that to displease his mother was their greatest dread”; they were also much attached to their grand mother “Brown,” and never forgot her tenderness and her indulgence to them; my father was 4 years old & my uncle 2 years when they lost their father, he died of yellow fever in N.O. August 29th 1804 1805.

My grand-mother some years after his death married Mr “Philip Livingston Jones”—he had known and loved her as the beautiful “Mary Brown”, and went to Louisiana to renew his addresses when she was a widow. My Grandmother finally married [“]Mr Jones”4 and the “Philip” in my father’s name, came from a request made by Mr Jones that it might be added, to the Nicholas; as Browse had the 3. names Hore Browse Trist 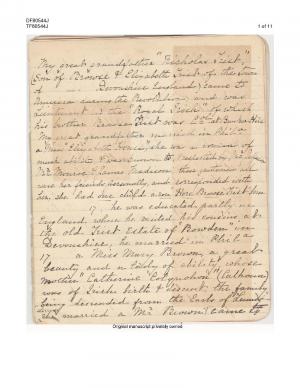