my grand mother’s 2d husband, who requested that my father “Nicholas Trist”2 should take his name “Philip” which he did, Mr Jones left him all of his silver among other things a very handsome & Complete silver tea service upon a solid silver tray, my father never recd any thing but the 5 tea Spoons, the rest all being absorbed into the family of my grand mother’s 3d husband by whom she had 2 children, Mary & Julian de “Tournillon,” my father of course never would claim the Jones Silver! the little spoons should be marked P. L. J. this accounts for the Philip in my fathers name, he was christened Nicholas Trist after his grandfather who was in the battle of “Bunker Hill” in the “Royal Irish” Regiment of which his brother was Col. my grandfather was at first “Ensign” and was promoted to Captain or to Lieutenant.

The teaspoons belonging to the Trist silver were never sent to my father, nor were the salt cellars, which were open work with blue glass linings–oblong in shape with the corners cut off [. . .] to continue the list of silver

1 Asparagus fork or spoon. given to Mary Trist by my Mother.

5 small gravy ladles, said to have been intended also for a “Punch bowl.”

Aunt Cornelia bequeathed her Silver beaker marked G. W. to T. J. ie George Wythe to Thomas Jefferson to my brother Dr Hore Browse Trist, also a Small Silver funnel and a small shorthandled tea Spoon, the latter used by grandmama Martha Jefferson when she was at school in Paris, at the “Abbeye Royalle de Panthemont.” Mary Trist has all of these pieces of Silver.

List of Silver given to me when I was married

A Set of desert Knives from Dr Robley Dunglison not marked

1 “Pie Knife” from “Mr Bulfinch” (Thomas) the author of the Age of Fable, “Age of Chivalry,” “Legends of Charlemagne”4 “Hebrew Lyrical Poetry” & “Romance of the Rivers.”

1 pair Silver salt cellars & Spoons “not marked, from Charles and Sallie Maury. Given to Anne P. Maury for a wedding present

6 tea spoons from Maria L. Burke marked B John had them made over in Baltimore.

1 doz dinner forks given us by Dr Murphy originally marked M. J T. J W B. the forks were so ugly & clumsy that J W B had them made over in Baltimore and marked B.

Ellen Dwight left me a small plated Sugar dish, with glass cup inside which belonged to Thomas Jefferson & was used by him in Paris, & also used at “Monticello”—

also a pair of small open work handled sugar tongs & 8 teaspoons twisted handles, marked (M S B Martha & Bathurst Skelton) they belonged to great grandmama Jefferson a widow Skelton when she married T.J. these articles and the 3 pictures which Ellen left me she said were to go to my daughters at my death.

of the pictures “Hector & Andromache” by Benjamin West, & bequeated to T. Jefferson by “Kosiosko” is really valuable in a pecuniary point of view. the “Holy Family” is a good copy and valuable as having belonged to Thomas Jefferson, the “Déjéuné [. . .] at Ferney” is ugly but rare, I cannot undertake to divide these articles, my dear [. . .] daughters must divide or draw lots.

Ellen Dwight sent me a very small pair of silver salt cellars & spoons the Xmas that Ned had typoid fever, I gave them to him.

large silver basket & a tea spoon, the only Trist teaspoon that came to my father, my mother had marked N. P. T B. for the baby” N. P. T. B“ 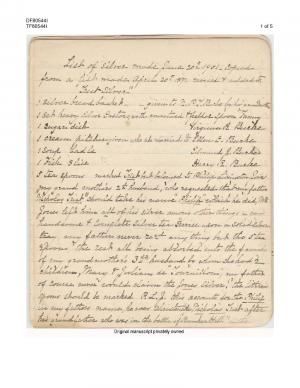