On the 20th Instant at “Monticello,” died in the 60th year of his age, Thomas Mann Randolph late Governor of Virginia. In death, as in life, the same fearless, intrepid individual. Mute under protracted & excrutiating agonies. A Unitarian in faith: of the future professing to be without fear, as he was without knowledge. A man of science & of genius. Stern & haughty to his superiors, quick & excitable with his equals; To his inferiors, generous, bland, courteous, & forbearing. His virtues were the impulses3 of a Noble & magnanimous heart, his defects, those of strong excitement. The impetuosity of his temper & the intensity of his feelings, led him often to acts of injustice, even towards those dear to him. But he died at peace with the world; after seeking the forgiveness of all within his call: in particular with of his son, to whose rigid integrity, in the presence of friends summoned by himself, he did ample justice; and on whom he bestowed, with the most unqualified expressions of esteem, the most fervent blessing.

Copied into this book from a copy of the notice in my father’s hand writing signed T. J. R. in my uncle Jeffersons handwriting; and found among my mother’s papers.

my mother and aunts always spoke with great affection of their father, he was always most tender & loving to them and never missed an opportunity of interesting them in subjects of Natural history, he was a most scientific Botanist, & had taken a course of Medecine in the University of Edinborough, because he thought that as the head of a family, and with many slaves he should be able to act in cases requiring a knowledge of Medecine & of surgery, when a Physician was not at hand, nor easy to reach without delay, which might have proved fatal. 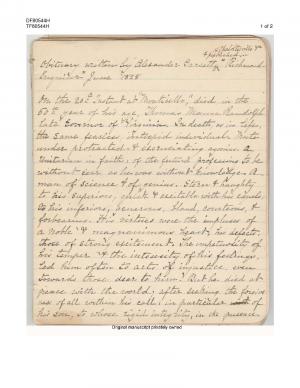