First mention of the name Jefferson in Colonial Virginia”

x x x x x x1 The first time that the name of Jefferson appears in any record of the affairs of Virginia which happens at as early a period at as twelve years after the settlement of the Colony.

It was known that a house of Burgesses had met in the early days of the Colony, but at what precise time it met, and how long it sat, & what was done by it, there was no record of, that any one knew anything about, until lately, when Mr Conway Robertson found in London a manuscript of about 30 pages containing a detailed account of all these particulars.

It met the 30th of July 1619 and sat four days, in which time it transacted all the little business of the Colony.

There was also in this manuscript a list of the names of the burgesses, & one of them was a Mr Jefferson of “Flower de Hundred.”2 At that time the Colony was divided not into counties but into Plantations as they were called, which stretched westward without limit and “Flower de Hundred” was one of these.

Copied from a letter of aunt Cornelia’s 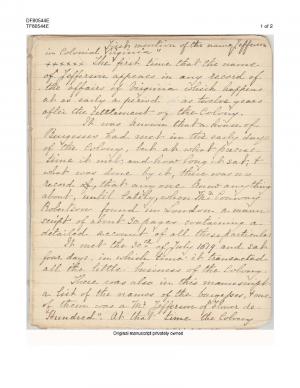