Small Articles of Jewellery & other relics of Thomas Jefferson.

1 stock buckle & small pair of shoe buckles of “Paste” or crystal set in silver, the stock buckle he was wearing at the time of his death,

1 Silver pencil case made to hold a cedar pencil, & with a “w Whist” marker on it, altho’ Mr Jefferson never learned any game of cards, & did not know one card from another.

1 Silver case Containing silver tooth pick. tiny silver 6 inch ruler, ink bottle, & compasses, & pen. which Grandpapa carried always about his person up to the time of his death, & which “grandmama” (his daughter Mrs T. M. Randolph) gave to her daughter Virginia J. Trist, & which she gave to her son (my brother) “Thomas Jefferson Trist” & which he bequeathed to me, with other Jefferson relics. such as T. J.’s brass seal & a lock of his hair; a pair of old eye glasses set in silver & tortoise shell,

A Magnifier used by grandmama, and other small articles which I shall mark. Also the “Trumbull” portrait of Thomas Jefferson taken in Paris in the autumn of 1787 when he was 43

George Wythe’s “Bible” which he bequeathed to Thomas Jefferson

A small blank book of quotations, Latin Greek & English written by T. Jefferson when a youth, & before his hand was fully formed. His Parlimentary Manual” the one he used & gave to N. P. Trist.,

Combs Ivory, & box wood, in use of by T. Jefferson his linen wrapper used when having his hair combed by his grand daughters,

A pair of blue or grey yarn stockings

A pair of thread “chausons” or short socks, worn under silk stockings for neatness, A Cambric stock, taken off when he was taken ill, & the last he ever wore, which had the stock buckle set with white & yellow crystals, (already mentioned) attached to it.

A large red silk quilt with a silk fringe which was on his bed to the last, & which is now in Fanny’s studio.

Books given to N. P. Trist. by Thomas Jefferson Among the books given to Nicholas Philip Trist are his own copy of his “Notes on Virginia.” & his own copy of his “Parlimentary Rules.” The Notes on Va I imprudently lent to Rannie Meikleham Sr who took them book I suppose as he never returned it to my hands as I especially requested him to do! 1896. he says he put it where he took it from the day I lent it to him, & I told him especially not to put it there, but [. . .] into my own hands!

The articles from Monticello bequeathed to me by Ellen Dwight. 1894. “& after me to my girls”

A pair of Sugar tongs & 5 “twisted handle” tea spoons which belonged to Mrs Jefferson during her 1st marriage to Bathurst Skelton, & marked2

A copy of Rafaelle’s “Holy Family” an excellent copy which Mr Jefferson bought in Paris, & which hung in the dining room at Monticello on one Side of the arch leading into the “Tea room”

“Hector & Andromache” “Original” by “Benjamin West” painted in Sepia, for ” Genl Kosuosco and left by him to Thomas Jefferson, this hung on the opposite side of the arch leading into the Tea room, opposite to the Holy Family,

this engraving was given by Mr Jefferson to Mr Joseph Coolidge of Boston, probably because it is a rare print

The water color drawing representing a Castle & a lake in Sweden, painted for “Kosiusco” by an Officer in the Swedish army was also given or bequeth bequeethed to Mr Jefferson, and belonged to Aunt Cornelia, I gave it to Harry

Some old engravings which I remember all my life, and which belonged to Mr Jefferson are in the large old portfolio, two of these “Nanette Effrayée” & Aglaë Sauvée” used to hang in grandmama’s sitting room in the old house at Edgehill, when my mother was a child, I gave these to Virginia & Ellen,

some views of “r Rome” done in red & representing cards, also came from the Monticello Portfolio. Also an engraving representing the “Fountain at Vaucluse” and some others, valuable only because they are old & belonged to Mr Jefferson.

The little table which old Mr John Willis sent me, was made for, & belonged to old Mrs Madison mother of “James Madison,” it was in her use; after the breaking up at “Montpelier,” the table belonged to Mr Willis and was injured & abused by buckets of water being set upon it out on a porch Mr Willis sent the table to me, with many apologies for it’s shabbiness, but I cleaned & rubbed it up, & he was much gratified at its altered appearance when he saw it again in our parlor, & found that the little relic was appreciated & valued. 13th Jan 1896. I have had the table now many years. I write these little memoranda about relics as they occur to my mind! 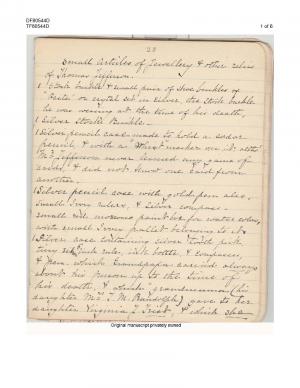