Extract from a letter written by Elizabeth Eppes—wife of Frances Eppes. to aunt Jane (Mrs T. J. Randolph of “Edgehill.”) July 7th 1828. “Poplar Forest” Speaking of life at Monticello “before death had changed those scenes of peace & happiness I have ever felt cheered & enlivened in my visits there, by the god-like benevolence & tranquility which shone in Mr Jefferson’s countenance & voice & manner, & that hope inspiring patience, that mixture of tenderness, gentleness, & sprightliness for which my aunt (Mrs T. M. Randolph, nee Jefferson) was so remarkable, but alas that happiness is now fled those days are gone forever.”

In the same letter dated July 7th 1828 Mrs Eppes speaks of the death of her uncle Gov. Thomas Mann Randolph. he died at Monticello. “To hear from Nicholas (Mr Trist) how well my aunt supported herself under the first shock, was most consolatory to us, but we still feel great apprehensions on her account. In the last “Enquirer” there is a handsome obituary, calculated I think to soothe the feelings of his friends, & yet giving no unmerited praise—one who had been so loved, so admired, must even in all his wanderings & aberrations, have preserved some what of his original brightness—We truly rejoiced to hear through Nicholas of his cordial reconciliation with Jefferson (T J. Randolph) & Mr Garrett’s mention of it is just what I could have wished.” Signed E C. Eppes. 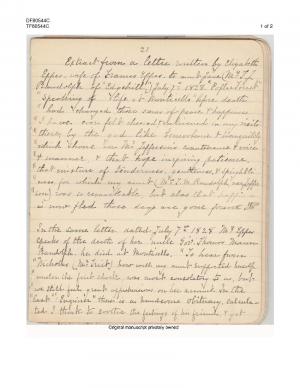