Martha J. Trist Burke’s Other “Relics” and Reminiscences of Monticello

There are several other relics small & insignificant in themselves but valuable as having belonged to “Thomas Jefferson” A silver stock buckle”—a pair of shoe buckles of steel, a pair of silver shoe buckles with small crystals set in them, and a stock buckle to match: this buckle he was wearing at the time of his death; I have the Cambric stock taken from his neck.

The “Gold Medal” was given by the Agricultural society of the “Seine” to Thomas Jefferson as a prize for an improved “plough” Share”1 this gold Medal I wish my son E J. Burke to have. and the bronze medals in the green morrocco case are for Harry. among the remaining medals are (several in silver.) all, of these medals (of whatever material) are valuable and must be divided among my girls. Colas having the old Clock, & the Jefferson Sofa, & the silver Beaker, three of the most valuable Jefferson relics. I am sure he will think as I do about the medals.

I remember my mother telling me that when uncle Jeff brought his bride Jane Hollins Nicholas” home to “Monticello” she was about 17. and my mother near the same age—mother says that she was given the charge of entertaining the sweet young bride, as grandma, assisted by aunt Ellen & aunt Cornelia were very busily engaged making a “Catelogue” of Grand papa Jefferson’s Library which was to be sold to Congress. This being thrown so much with aunt Jane, gave her a feeling of being more intimate with her, and I think aunt Jane always retained a specially tender feeling for my mother.

The “Mammy” at Monticello was a tall mulatto woman named “Prescilla” she came from the “Forest” consequently belonged great grandmama Jefferson (Martha Wayles) estate. Prescilla married “Johnny Hemmings” the Cabinet maker & Carpenter at Monticello, he was called by the children of the family Daddy. “Mammy” presided in the nursery, and when her charges became too numerous for her alone, “Isabella” was called in to assist her. Each child in turn taught “Mammy to read,” but she never got beyond words of three letters. When all of her young Masters & Misstrisses were grown, she retired to her comfortable Cabin, a short way down the mountain side, & there, she often carried the young grandchildren of “Miss Patsey” I remember the appearance of the interior of that Cabin, the position of the bed with it’s white counterpane & ruffled Pillow cases—& of the little table with it’s clean white cloth, & a shelf over it, on which stood an old fashioned band box with wall paper covering, representing dogs running, this box excited my admiration & probably fixed the whole scene in my mind for I described the Cabin to my mother years afterwards, & asked her where it was? she was surprised & said “why that is the exact description of mammy’s Cabin, which you have not seen since you were [. . .] two 1/2 years old.”

Another old servant who came from the “Wayles estate” & who came to Monticello as a little girl sitting on the trunk behind the carriage which brought Mrs Thomas Jefferson a bride to Monticello; this little girl was named [. . .] “Scilla” &c & called Aunt” in her after life she lived to be very old, & died at Edgehill years after the family at “Monticello” was broken up & dispersed far & wide. “She Aunt Scilla” acted as “Midwife” to her young “Mistress” Mrs Thomas Mann Randolph & afterwards to Mrs Bankhead, Mrs T. J. Randolph & to my mother, [. . .] “Aunt Scilla“ officiated at my birth, & at that of my brother “Thomas Jefferson Trist” the 1st* great grandson named after Mr Jefferson and the only one born at Monticello. 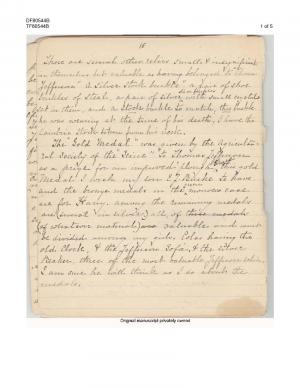