George the Third &c. To all &c Know ye that for divers good causes and considerations but more especially for and in consideration of the sum of Thirty shillings of good & Lawfull money for our use paid to our Receiver General of our Revenues in this our Colony and Dominion of Virginia We have given granted and confirmed and by these presents for us our Heirs and Successors Do give grant and confirm unto Thomas Jefferson one certain Tract or parcel of Land containing two hundred and ninety eight Acres lying and being in the County of Albemarle on both sides of Tomahawk Creek a branch of Blackwater and bounded as followeth, to wit, Beginning at Major Charles Lynch’s corner near Tomahawk Creek and hill at several Pointers and running, thence on the said Lynch’s lines south thirty two degrees West one hundred and twelve poles crossing the said Creek twice to pointers at the Creek thence South sixty five degrees West seventy five poles to pointers by the same Creek thence up the Creek sixty poles to pointers by a ledge of Rock on the South side of the said Creek thence South seventy two degrees West twenty one poles to pointers South forty degrees West thirty seven poles to pointers thence on the line of Capt Thomas Ballow North fifty two degrees West one hundred and eighty eight poles crossing dreaming and Tomahawk Creeks to pointers thence on the line of Thomas Turpin North fifty nine and an half degrees East two hundred and fifty four poles to pointers thence on the line of Charles Lynch deced South sixty degrees East one hundred and sixty eight poles to the beginning. With all &c. To have hold &c. To be held &c. yielding and Paying &c. Provided &c. In witness &c. Witness our Trusty and welbeloved John Blair esqr President of our Council & Commander in Chief of our said Colony & Dominion Williamsburg under the seal of our said Colony the twentieth day of September one thousand seven hundred and sixty eight In the eighth year of our Reign. 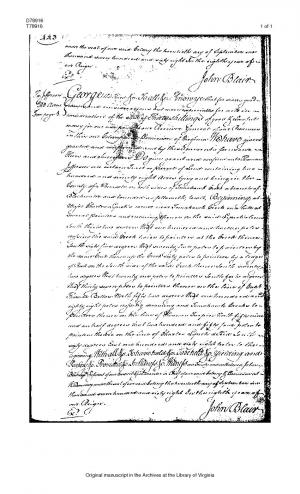