Your letter which I received by Mr Stone gave me the most sincere pleasure, and I am rejoiced to think I shall hear from you more frequently, as it will in some measure make amends from a seperation, the thoughts of which will ever give me pain, and I still am foolish enough to believe we shall meet again, though that time may be so very distant, that it makes me quite melancholy, and I assure you the change of scene has not made me forget you and I now think it a great misfortune we ever knew you, car je sens que je vous aimerai toujours. Your accounts of Botidoux passion is quite ridiculous, she has certainly lost her senses. I have had two letters from the Clinq, which if I have time, I mean to answer this week. London is very empty, we go in the country tomorrow but return here Saturday or Sunday for a day or two, when we go out of [. . .] town for the summer, but pray direct to Gosvernor Square, as our letters will be sent after us. I have had the pleasure of seeing Mr Stuart whom you must remember at the balls, I was quite surprised to see him, we met him in the streets, Miss Coutts before we left Paris told us, he was expected there every day. I feel quite angry at Tom’s indifference, we have great reason to [. . .] complain of his forgetfulness, as he promised to get us two smart canes, which he was to send by Mr Stone: if he should now send them, I am so piqued at his little impressement that I should break (mine) at least instantly. Do you know if the Coutts’ have left or are leaving Panthemont, as I have not yet seen my passion and yours, Old Coutts, for as the short time we have been in town, we have had no carriage except the Dukes, and he is now in the country, he desired me to tell you that he hopes you like Mr Short as much as ever. You cannot imagine how much Mr Stone was mortified at not seeing you the day he called upon Mr Jefferson, indeed it was very cruel in you not to appear. Pray write to me soon, I cannot express what pleasure your letter gave me. Adieu, my dearest Miss Jefferson, pensez quelquefois a moi and believe me most sincerely yr affectionate

I have not yet heard from that amiable creature at Bologne—

car je sens que je vous aimerai toujours: “because I feel I will always love you.” pensez quelquefois a moi: “think of me sometimes.” 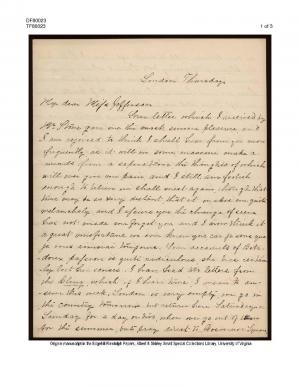