My cousin Mrs Harrison, begs me to add some of my “memories” of what I have heard, from my mother & aunts on the subject of their child life at “Monticello”

My mother (Mrs N. P. Trist) the “Virginia” of the Monticello family, and my two aunts Cornelia & Mary, who made their home mostly with my mother, (after the breaking up of the family) have often told me of their childish games such as “Puss in the corner” played among the trees on the edge of the lawn, or “Hide & seek” up in the 3d Story, where under the large roof, there was ample room, for lofts & “Cuddies,” affording admirable places for hiding, there on rainy days, or in wintry weather the “children” could play, & make as much noise as they liked, without danger of annoying the grown members of the family, or of disturbing “Grandpapa” which the youngest child was careful not to do. In the winter evenings, sitting around the fire at dusk, the children were encouraged by “Grandpapa” to play games suitable to the hour & to the place, & he often joined them in games such as “Hunt the Slipper” or “I love my Love with an “A,” I took him, or her, to the sign of the “Antelope” or the Anchor, & I treated her to “Almonds,” then “My Love” was lov’d with a B & &c, the point being to quickly answer some place, or some thing, the name of which began with the specified letter; in case of mistake, or too much hesitation, on the part of the person who was to answer, there would be a forfeit. These merry games were interrupted by the entrance of “Burwell” with “Candles” when “Grandpapa” & “Papa & mamma” would have their candle-stands, with candles, and every child (who was old enough t[o] sit up ’till 8 O’clock) would take his or her book, or sewing & gather around the table, where candles were left after tea for their benefit. Besides these evening twilight fire side games, there were French games such as Oh! gai oh! gai Belle Marguerite

to be sung while dancing around in a circle, on the lawn in summer evenings. These were “reminiscencies” of mamma’s “Convent” days in Paris, and she taught them to her children, besides many pretty french songs & Lullaby Lullabies which my mother (who had a sweet, full, clear voice) learned from hearing “Mamma” sing them in the nursery at Monticello. My mother in her turn singing them to her children & grandchildren 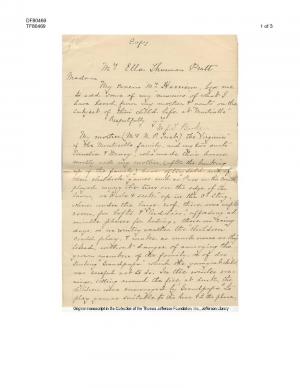