“As Jefferson’s daughters were both married before his 1st Presidential term, it is his grandchildren who appear on the roll of the “Children of the White House”; and in the roll of “children of his old age” we find the children of “Dear Patsey”

At Edge Hill, In the the White House and finally when “Grandpapa’s” public duties were over, the “home life” of “Monticello.” The oldest “Anne Cary” (named for her grand mother, the daughter of “Old Iron” of revolutionary times) was old enough, to appear at a ball in Washington. This she did, with some companions under the “chaperonage” of Mrs Madison. Anne brought up amongst the Mountains of Virginia, had not before been in “grande Toilette ball dress.” Mrs Randolph seeing a lovely fair haired girl entering the room turned to Mrs Cutts to know who she was? Mrs Cutts exclaimed Heavens woman, dont you know your own child? (Mrs R. was near sighted, dying at the age of 64, she had never needed glasses) “Thomas Jefferson,” named for his Grand father, and destined to be the support & comfort of his old age “Ellen” afterwards [“]Mrs Joseph Coolidge” of Boston, “Mary” who as a child was a miracle of beauty, exciting the admiration of all the visitors at the “White House,” “James Madison” born (in the early days of Jefferson’s administration) at the “White House,” Cornelia & Virginia born at the old (home at “Edgehill),”*

*“a mistake they were both C. & V. born at Monticello! the 6 first children, & the 3 last all were born at “Monticello.”

Benjamin Franklin born there but borne in the arms at six weeks to “Monticello.” The little family henceforth to find their home there, and to have added to their number “Merriwether Lewis”—“Septimia,” & “George Wythe” When Mr Jefferson visited the mother, on the birth of this her twelfth child, he in playful reproach said, “My dear! we shall have to send you back to the convent!”—The high sounding names of these little people, must have been a protest against the Dollys. & Pollys &ca of the past generation, as well as a tribute to “Dear Papa’s” friendships.

“Big Cheese” with it’s ponderous apparatus for turning it. Mrs Adams had “dried” clothes” there, and it afforded a royal play room for rainy weather.

As time passed on, and Priscilla’s charges were constantly added to “Isabella” was called in to aid, in the labors & care but the children were ever “loyal” in their devotion to “Mammy.” and when my father was over eighty years old, he climbed up a ricketty ladder that he might stand once more on the floor of his mammy’s room. The unroofing of an old building at “Edge Hill” exposed it, after having been covered for fifty years. My aunts, except Mrs Meikleham ([. . .]) never had a governess, or went to a regular school. My “Grandmother” with all the duties of Mother, Miss Mistress, & hostess, found time to teach them, & to aid materially in the education of a family of nieces (of Gov. Randolphs) who lived in the neighborhood. She had the happy faculty of inspiring them with such a thirst for information, that they never lost an opportunity for self culture, and were highly cultivated women. “Virginia” (Mrs N. P. Trist) dying at eighty congratulated herself the year before her death, that she “could at last read Don Quixote in the original”! She began the study of Spanish, when she was the mother of three children. Their moderate income entailed on them labors, which were often burthensome, but amidst them all there was a regular system of intellectual culture kept up.

It will interest you to know that boys clothes, and often the little girls dresses were from the wool grown at “Edge Hill” and manufactured in the cottage looms of the poor neighbors. Spun probably by the slaves, and dyed under Grandmama’s supervision. 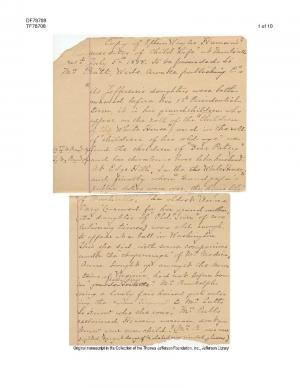