We arrived here safe & sound, dearest Virginia, on saturday, but as I was obliged to write for the Steamer, it is only now, Monday, that I have time to write to you. Tell Cousin Beverley that his recommendations procured me all sorts of attentions from his friends. Mr Bomford was very civil, Mr Latimer was waiting for me in Baltimore, &, having done every thing he could for me himself, introduced a young Irishman, whose name I think is Keough, as my escort to Philadelphia. I found him gentlemanly, educated & attentive. He entertained me with very pleasant conversation by the way & took excellent care of me & mine. Pray thank Cousin Beverley for his kindness. We reached Philadelphia in a pouring rain but found good rooms & good attendance at the Washington. We passed the evening with Dr & Mrs Dunglison & gave them the first news of their son John, whose letters, if he has written, have not reached them. The next morning, bright & cool, saw us early on board the Boat—Dr Dunglison was there before us & his recommendations procured us all sorts of attentions kindness & protection from the officials. I never made a journey with more ease & less trouble. When I spoke to Mr Keough of the attentions paid to unprotected women travelling in this country, he said it was only to be wished that the ladies would not take these civilities as so entirely their due as to feel exempt from the necessity of returning any sort of thanks for them—that men in America were always willing to do what they could for the Sex, but they did feel obliged by the condescencion which acknowledged their services. I had heard this remark before. Randolph even asked me in one of his letters if ladies in America never thought it necessary to say “I thank you” for any thing that was done for them—that he had been told this was the case. I, of course, took care to pay my escorts in the only coin that passes current in such cases, the gold of civil speeches which were prompted by grateful feelings.

I found all our friends well in New York & Mary ready to go on with me. I meant to have passed a day with Anna in Hartford, but she writes to advise Ellen & myself to be vaccinated before leaving N.Y. as the Small pox is abroad in Hartford & the adjacent country. This determines me, sorely against my will, to take the Fall River route.

My luggage which, as you know, left Washington on Thursday, was only delivered to day, an hour ago, & then not till after Dr Meikleham had gone after it. The men who brought it tried to jew me out of another dollar, under pretence that I was bound to pay the cartage to 20th St. Luckily I had the receipt that I had taken in Washington. As it was, after engaging to carry my trunks for eight dollars they had made me pay twelve, & when I excused this from supposing the trunks to be much larger than they supposed, they had the impudence to try another extortion which I resisted. I fear this Adams Express is a rascally concern. I had rather, however, have paid the twelve dollars twice over than have worried my kind conductors with the charge of so much luggage. Another time I will trust less to Fanny’s discretion.

The children are well. Ellen saying almost every thing. She is a miniature Bellona, a termagant of the first order, & I pity her husband that is to be. But [. . .] she is as clever & funny as she is shrewish.

The weather here is decidedly cool & I hear that in Boston it is wintry. Ellen is beginning already with headach & pale looks. I wish I had left her to go on to Edgehill with Jefferson. The northern climates do not seem to suit her.

There is a Mr Ralston Cox, an adorer, I believe, of Pattie’s, (who seems to be under Dr M—s care & a sort of half boarder in the house,) who dines with us every day. He is good-looking & gentlemanly. Ellen Meikleham is much in love with him, calls him Monkey Cox & overwhelms him with affection. She shewed him her frock which was one outgrown by a succession of brothers & sisters & was rather short & shabby & repeated the words Aunt Coo, till he asked with some surprise if Mrs Coolidge had made her a present of that frock.

I hope that Nicholas is with you. If so give him my best love. I cannot get over having come away without seeing him at last. Adieu, dearest sister; love to Cornelia, Pat Tiss , Jefferson & Browse. Ellen is down town shopping with Mary. I passed an hour last evening with Jane Smith who was complaining but made herself uncommonly agreeable. It runs in my head that I had something to say which I have omitted—never mind, it will come again the next time—I spent a delightful five weeks with you, dear Virginia, & wish they were to begin again. God bless you.

I have written in great haste as it is late. Excuse all incoherencies. 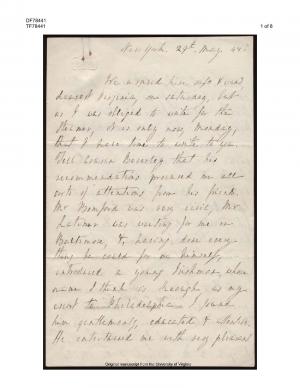