It is long since I have written to, or heard from you, my dear Virginia, and Mary and myself are beginning to grow quite uneasy at receiving absolutely no accounts from Havana. Our last dates are Dec. 15. nearly two months old, and as vessels are arriving in the Southern ports every day, and accounts have been received as late as Jan 23. we wonder much at the protracted silence of so large a family of grown persons as yours. So many writers and so little writing. done You, I suppose, have quite as much as you can do in the care of your children and family affairs, but Cornelia & Septimia I presume, have abundance of leisure. For myself I am always straitened for time and never more than this winter. I hardly know why, but it appears to me I have never been so absolutely without leisure as now.—The death of Mr Coolidge’s mother, although an event which has been impending over her family for years, has fallen heavily, as such a thing must always do. Papa, particularly, seems as if his occupation were gone and as if he had little left to live for. Mrs Swett has great moral courage & by her example if influences all the rest; Annie is entirely self-possessed, and all together the whole family, for the sake of keeping up Papa’s spirits, exert themselves to support their own—I dread the effect which the news may produce on Joseph when he hears it, as he must do, away from his family and friends, with no one to sympathise with and console him. He was devoted to his mother and will be almost overwhelmed I am afraid at the thought of never seeing her again.—He always hoped that, feeble as she was, she might live until his final return.—My boys are making such a clamour around me that I am compelled to lay down my pen, and Algernon coughs so incessantly that it alarms and makes me nervous. Farewell then until another opportunity.

The boys are at school, (the Twins,) and Jefferson is reading a new book, so that I hope to finish my letter, although I do not know exactly when I shall have an opportunity to send it. Mary wrote about a fortnight or three weeks ago and Ellen also sent a foolscap to Joseph which would at least let you know that all are well. Mary’s health is, I think, better than when she arrived. She walks a great deal in all weathers but takes no cold and is less dyspeptic then some time ago. Her spirits are irregular, sometimes better, never very good, and as my own are only kept up by effort, we are not a very cheerful pair. We are both neither of us however at all inclined to give way and, of course, there is never any thing like nervous weakness. I feel sometimes as if it were a weary thing to live on with so many cares and so few enjoyments, but, I presume, this is the history of more lives than mine; perhaps were I as apt to reckon the blessings as the troubles of my lot I might find such a preponderance of good as would shame my ungrateful discontent, but it is a poor consolation to be compelled to acknowledge that we are ourselves far more to blame than our destinies.

I am very anxious to hear farther particulars of your establishment at the Bishop’s gardens. Whether you find your house comfortable small in spite of it’s being small; how you are, upon the whole, pleased with the climate; what acquaintances you have made & whether mostly with Spaniards or Americans. You spoke so much of Dr Green in your letters that I have been trying to find out something about him. At first my inquiries were vain, nobody knew such a person, but latterly I hear that he is of a decent and respectable family ’though by no means fashionable. He has an uncle a schoolmaster and a brother who keeps a dry-goods shop at Jamaica Plains, about four miles from Boston. Another brother is connected in business with a firm of importing merchants, having married the daughter of a wealthy man here who procured the partnership for him. I believe they are all good people, but if connected with the Copley Greens are not at all in the same circle with their wealthy and fashionable kinsfolk. This is the amount of what I can gather and that only recently.

I have received letters from Joseph as late as Sept. 22. He was at Singapore on his way to Canton, in good health and spirits. We have also heard recently from Edgehill where all are well. Lawrence Carr is married, but I do not remember the lady’s name.

We are all here as usual, the children with bad colds according to custom at this season. Mrs Curtis was here came to see us yesterday and thinks your boy Jefferson looks exactly like me. Mr Heard is just where he was and what he was and seems no nearer matrimony than a year ago, although the public are still busy in selecting wives for him. He might have been as well off as the Grand Turk, if he had only taken half the number which Report has provided for him.

A letter from Aunt Hackley informs me that Harriet is keeping house; that she makes an excellent house-keeper, which I always thought she would, that poor Luly is in bad health again but Charlie & Puss the images of health and happiness. The fourth has not yet made it’s appearance. Mammy Ana is also very unwell, so as to render but little assistance in Harriet’s household.

Farewell, dearest sister, a great deal of love to all around, kisses to the children and to my poor little feeble boy whom I miss more than I can express. Nothing but his being with you at all reconciles me to his absence. I have heard nothing lately of Hannah’s friends and conclude they are all well. I was sorry to learn from Septimia’s letter that Hannah had, so far, experienced no benefit from change of climate. I shall write to S— as soon as I can. Cornelia is in my debt. Love to Nicholas and Heaven bless you all.

Mr & Mrs Greenwood with their daughter, a child of seven years old, are to sail about the 1st March for St Iago de Cuba from whence they are going to Havana. He has been ordered away from the East winds by his physicians and is going to Cuba in company with a friend of his, a Mr Gibson, who has an establishment there. I know Nicholas will be kind to them when they reach Havana, whither I presume they will go after a short stay at St Iago. 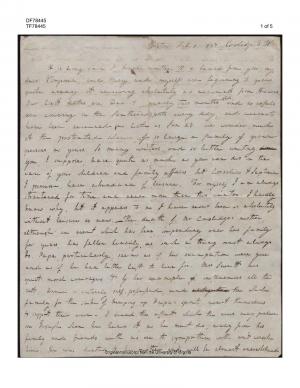