I meant to have written to you a day or two sooner, dearest Virginia, but I have been preparing letters for Canton & writing to Boston, and have brought on two severe attacks of pain by persisting in bending over my desk after eating, so that this morning (before breakfast,) is the first moment I have had to tell you what I am about.—Upon inquiry I found the difficulty of procuring lodgings greater than I had supposed it would be. I should have been compelled to go into the house with other people & other people’s children, no such thing as having rooms where there were no other boarders. Then I must have paid five dollars a week higher and then I do here and put out my washing besides.—These difficulties determined me on a change of plans. I have made my arrangements to go back to Boston the first of next week, about the 12th or 13th. Ann can take care of the children and Sarah Webber will do cooking and house-cleaning until I can collect my servants. I think it probable I shall end by taking whites as the northern blacks are a detestable race, and as to waiting here, on Coggeshall’s Neck, until I can get them from the South, I should die of cold & damp & desperation before the end of September. However I still wish Harriet & yourself to make all the inquiries you can for me, as I think I shall find extreme difficulty in making up my complement of domesticks & Sarah Webber is what the yankees call such “a queer child” that I do not know how long I can place any dependance on her. When I get home I shall remain incog. as long as I can, keep my doors closed, try for occasional help, and live as I can, perhaps clean my own parlours, until better times. The weather since you went away has been, two bright cold days and four of rain & fog & confinement to the house. The children & Hannah continue well and I am just as when you left us, no better & no worse. I have received long letters from Canton, but still no dates later than the 9th of March. Joseph was well & in good spirits, & has sent me two or three beautiful, cool sweet muslin dresses enough to make your teeth chatter & your skin pucker up into goose flesh to look at or think of. A good suit of Buffalo robe or Bear skin would have been more wise-like. He has a great many messages of love for you all.—A letter from George, of Aug. 23., which I only received yesterday & immediately re-directed to Mama as I thought she might not have heard from him, relieved me of my anxiety on his account. He is well, came home to try for his examination & is at Portsmouth hard at work [. . .] I presume in preparing himself. He makes no excuse for long silence but the usual one of aversion to writing & addressed his letter to me because he did not know where to direct to Mama. Poor Mary Stearns is dead. We saw her death first in a newspaper & afterwards Hannah received a letter from Martha containing some particulars. Mrs Harrison Gray Otis (the mother of Mrs Ritchie) also died very suddenly two days ago. She has been in poor health a long time, but no one apprehended immediate danger.

I cannot tell you how much I missed you all when you first went away. The house looked cold & forlorn & cheerless enough. Mrs Perry did not allow your apartments to remain vacant long, for she has put the “men folks” in one room & the women in another—no more new boarders however—she says she has declined one recent application, but of this I am somewhat “apocryphal” as when Mrs Higginbothem used to say when she meant doubtful. Eunice has gone home, & no one remains with Mrs Perry but “Miss Sarly ” as Tom calls her, & that sluttish hussy Harriet who is constantly trying to make herself a companion for Ell[en] I have seen no one from Newport since you went away but Mr Randolph & Col. & Mrs Apthorpe but I shall make a desperate effort to f get in one day this week to pay a visit to Col. Totten’s shells. To day (it is now after breakfast) the sun shines with a sort of white, wintry light & the wind is so cold that the children are gone out in their merino coats.

Adieu, my dear sister, give my love to Nicholas & the children & to Harriet & her sweet little flock—I often fancy now that I hear Passy’s little cooing voice; if any thing could make me wish for a baby it would be living in the house with such a pretty, healthy, well-dressed darling as that. I could not find it in my heart to be sorry for Capt. Talcott’s disappointment mistake in coming on to Newport for I really was so glad to see him. He is the only one of my new relations whom I really truly like. you know I abominate your friend & cousin, not mine, Mr Edward Smith. But I must close; if Mde Gaubert has not sent the bonnet (and I do not suppose she can possibly have done it as yet) it may either come on here any time before the 12th or be sent to Boston as she did the Leghorn of last year. Once more adieu, I cannot tell you, my dear sister, how lost I feel without you & your dear children & Nicholas. Give my love to Aunt Hackley, Jane, Maria (that fickle creature) and Mammy Anna. When you see Mary & Septimia tell them that Mary Oliver is engaged to be married to a brother of Mary Alsop.

Ever your own affectionate
E. W. C. 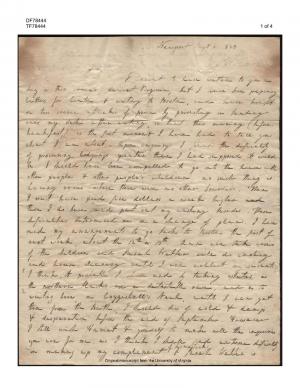