I came to town yesterday to try & hear of other lodgings as I find those at Newton entirely insufferable and your letter was put into my hands. I write to inform you of the sale of the pictures which took place a few days ago—the proceeds when all expenses are paid, the auctioneer’s bill, the hire of a room &c will amount to about four hundred and fifty dollars which I earnestly advise you to appropriate to your own use. it would be a drop in the bucket to grandpapa’s creditors but would make you comfortable for six months to come. let me know as soon as you can your determination and how you wish the money disposed of. I kept back the Ariadne, Bonaparte, Holy family, Crucifixion, Hector & Andromache & the soap-stone Indian, because I thought it a pity to sacrifice them as the others were sacrificed. Thomas Bulfinch has exerted himself to the utmost & done the best he possibly could, nor do I believe the pictures could have been sold for a larger sum any where north of the Potowmac.

Sam Appleton paid the highest price which was offered for any single painting; forty dollars for Diogenes & Alexander. the head of Columbus went for $20. Locke for $35., Bacon $15. You must authorise me to return your thanks to Mr Bulfinch, for his exertions have been great, and that the pictures sold for more than the cost of selling them, is mainly attributable to his zeal.

I am going to carry my babies to the sea-coast at Cohassett about twenty miles distant, where I shall keep them until the middle or last of September. nothing can exceed the discomfort in which I live at Newton. at Cohassett I shall at least have the sea air and salt water bathing which will enable me to bear the inconveniences I may otherwise be subjected to. the children still cough and Algernon’s headaches continue. [. . .] another change of air will perhaps do them good. Jefferson although pale & thin, coughing and cutting teeth, is very good humored and sweet. he says several words and imitates all the actions of the others. Sidney & himself fight occasionnally & “naughty Tom” is the best name the twins can find for him. they call him Tom because they cannot pronounce the word Jefferson, & he himself combining the two calls himself Jum jum.

adieu dear mother I write in great haste (as I wish to return to Newton if possible this afternoon,) and with wretched materials, bad pens, bad ink, bad paper; I fear you will find it impossible to read. I shall receive your letters in my new lodgings quite as soon as at Newton as there is daily intercourse with Cohassett by stage and steamboat. give a great deal of love to all the girls & boys of all ages and siz[es.] I hope some of them will write from Virginia, to let me know how they are going on, & by the first of October I shall be in readiness to receive the one of my sisters who is coming to cheer my solitary home for me. there have been no arrivals from Canton for more than a month & none expected sooner than the middle or latter end of August. once more farewell, I talked with Mr Swett about the consulship at Havana & found him clearly of opinion that Nicholas had better not attempt to enter into business but remain satisfied & secure with the fees. 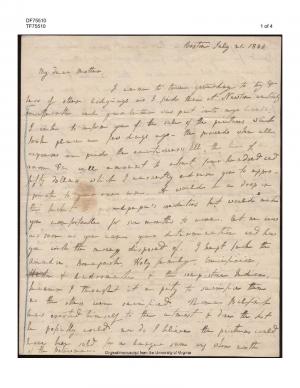