Old Col. Lindsay died a few days ago I have heard no particulars of his death except that he had gone to bed at night apparently in his usual health—we are all well here except colds & except sister Jane’s encreasing ailments which it is to be hoped will shortly terminate. Martha had an attack of fever soon after her arrival, but it lasted only a few days & she is playing about again but Virginias maid Emily who came with her as a nurse for Jeff. has been confined to her room for ten days & we begin to be apprehensive that her disorder will turn out to be nervous fever. Washington has not been healthy this summer. my love to Mr Coolidge & kiss your little family for me. how I wish I could see them all. adieu 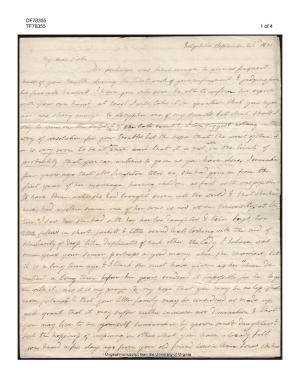