This cool day, so much like autumn, makes me feel that the time is approaching when we shall return to Washington. Mary & Septimia & myself will probably leave here about the middle of october; we shall meet Ellen & Willie in Fredricksburg & perhaps shall have one of Virginia’s children with us. Mama & Virginia will follow after as soon as we are ready to receive them. We think of changing our house for a larger one and it will be better for us to move before they arrive. Virginia has been to look at a house near the six buildings which she seems to like very much; it is a very disagreable neighbourhood & there are many things that I should regret much in our old house, but it is so small & Virginia particularly, is so uncomfortable there & will be more so during her confinement, that I believe on the whole we had best move. I shall not be sorry to return to Washington. We have been in a state of painful excitement almost constantly since we have been here; the sale of Monticello has has been felt deeply by us all. We were beginning to feel something almost like a hope of returning there; it is a thing quite probable that Congress should make that donation talked of last summer winter & that would have enabled us to buy it; then we might have supported it by having a grass farm, & even the rearing of silk worms would have been a source of profit. But now even if we have the means of purchasing Dr Barclay will hardly desire to part with the place. He is full of skemes; they tell us he intends to [. . .] cultivate the grape & [. . .] to rear silk worms & has some plan in his head for making a fortune which I do not know; they say he is a schemer & perhaps may get tired after a time. [. . .] wine & silk seem to begin to attract the attention of some people now. both may be made here; brother Jeff. has some casks of wine which he does not despair of being good in time & sister Jane talks seriously of the silk worms. I am doubtful of Dr Barclay’s taste & have some fear that he may disfigure that beautiful & sacred spot by some of that “gingerbread work” which grand papa used to hold in such contempt. We are all going up there once more together, when Virginia*

*we expect her in a week or ten days

comes, I wish you could be with us although the visit will be a very sad one & having paid it I care not how soon or how far we go away; a recent occurrence had run the whole of this family mad to go to Cincinnati; I do not much like the thoughts of it; it is too cold, the state of society too different from what we have been accustomed to, in short I [. . .] do not think I should feel at home or happy anywhere but at Monticello; I miss the very emotion excited by that beautiful scenery, I feel imprisoned in a small house where there is no place to retire & be alone a moment in the day; I want those familiar haunts which alone seem to be home & which seem as if grand papa was still there; but these are vain regrets & we shall soon be where such thoughts will not so constantly press upon the mind; we are fixed in Washington for some time at least; what will be our future lot is still hid from us; the wide world is before us & we may choose for ourselves; brother Jeff. even would not object to our going out in a body some where; the prevailing wish of this family is to leave the slave states in which mama Mary & Tim & perhaps Virginia concur; for myself, although I consider the practice unjust & tyrannical in the highest degree & have no more fervent prayer than that we may be fairly rid of them, yet I am accustomed to this state of things & attached to our own slaves, & as far as comfort is and liking to old habits is concerned it suits me best; in this family however they have attempted to unite too two incompatible systems; they attempt to do with as few servants as they would have in Boston without any of those ways of saving labour that you have there; the house is not a Boston house though a very handsome & pleasant one, consequently the difficulty amounts to [. . .] an impossibility of keeping it in the exact order that our grand mothers were so famous for in this state. [. . .] What has given an alarm to every one in this family or rather a disgust, is the news of an insurrection in north Southhamton county; it is impossible to find out the exact truth concerning the affair as these things are always whispered. so much is certain, that a party of negroes did commit depredations & murders among the whites [. . .] & We I believe it was not a premeditated thing; the papers say that after a camp meeting instead of returning home they went out to rob, & murdered, the last accounts say 30 persons, (60 was the number we heard first) & retired to the swamps where they are now hemmed in & are shot down like wild beasts where ever they can be found. Dreadful state of things where self defence makes men feel towards their fellow creatures as if they were bears & wolves & treat them accordingly; if this would turn people’s attention more towards finally getting rid [. . .] it is well that it should happen; but it is horrible [. . .] to th[. . .] this may only be in miniature the war that may here af[ter] be carried on on a large scale when our swamps & mountains may be taken possession of by armies of dreadful banditti.

Hannah Stearns left us the Evening of the 27th she intended staying a day or two with Virginia in Washington & going on without more delay than the difficulty of getting an escort from philadelphia [. . .] may occasion. We have found her, head, heart, & temper just what could be wished; the family here are much attached to her as we all are indeed; I am afraid her place cannot well be supplied; sister Jane thinks of getting, for one year at least, a Miss Lewis who lived sometime [. . .] with Mrs Higginbotham & is quite accomplished. Mary Ann Wydown, who was also applied to, is just married to a Mr Wallace.Ben is has just set out to seek his fortune, he went yesterday (the 28) to Dr Gilmer’s where he will stay several weeks & then Dr Dunglison advises him to stay several more with two young apothecaries in Charlottesville. As to Lewis, I do not know what he will do. he dissapointed us all very much; the last 6 months which he spent at the University, (he was only there a year) he did nothing & came off very badly in the examination, as he had been a very hard student before I can only account for this by supposing that study disagrees with him [. . .] excessively, for it is a fact [. . .] that while he studied his health was most miserable & that lately he has recovered it entirely. Brother Jeff. sent him to the University last year but this year Lewis says he will not go at his expence, indeed I do not know that brother J. would send him he is so disappointed at the result of the last time.One plan that mama & Lewis think of is that they should try & get a clerkship for him & he could carry on his study of the law some years longer before he gets a licence, this I think seems the best plan that has been proposed Adieu dearest sister believe me ever yours with all a sisters affection.

I supose the story we heard of you was true, when do you expect to be confined? Sister Jane’s time approaches & Virginia thinks hers will be in February.

give my love to Joseph & kiss the children for me. 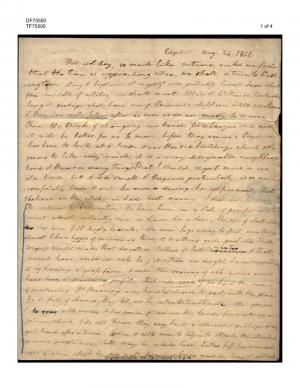