I have got so completely out of the habit of writing My Dearest Ellen, that from the circumstance of [. . .] living so much crouded to gether as to have no quiet place to read, write, or do any thing that can not be done in a croud that I lose much time which might, and ought to be given to my dear absent children, but it requires more character than I have, immediately to reform my habits with a change of the circumstances which formed them. We spent 10 days at the University with Mrs Dunglison during the meeting of the visiters, during which time we were incessantly in company at home, or engaged to dinner or evening parties every day that we staid. and the last day was a happy one for me, in as much as I heard My dear Benjamen’s name called as one of the first in all his classes, and finally with one other only of his class in medecine, he Graduated; that you know at our University is not a thing of course, but the reward of merit, & an honor which that must be deserved before it can be conferred. he is now Doctor Randolph, & two days since performed his first surgical operation an act of charity upon a poor man who had an [. . .] aneurism on the knee. you may suppose the interest and anxiety I felt; it was well done, and the man is doing very well so far; he is very anxious to attend a course of lectures in Philadelphia where he could attend the hospital, but the want of funds will defer it for the present. he is an excellent, & respectable young man, full of energy, discreet rational and likely I hope to succeed in his profession. Lewis began well but was not so fortunate in the result. his mind is considerab[ly] unsettled as to his profession for which he has conceived a great disgust, not at all lessened by the circumstance of it’s being so completely overdone that none but lawyers of the first standing make bread by it. he talks of going to Florida when he gets a licence of which he has no doubt though he is far from being thoroughly read. I told him he was doing himself great injustice and I proposed to him to get a clerkship which I have no doubt I could get obtain for him. the office hours are from nine till three which leaves a long afternoon for exercise and study. his salary would be probably $1000 500 would be a plentiful allowance in My family for board & clothing and 500 a year might be deposited in the bank bearing interest. that would give him time to perfect him self, in his profession and a little fund to support him in the first years when he would probably make but little I [. . .] know that some of his evenings would, & ought to be given to society but if he has talents & steadiness he will be immediately under the eye of the government who have shewn a disposition to assist the family. he will have an opportunity of acquiring much general knowledge & what ever business or profession he may hereafter follow he will if he is industrious be the better qualified for—Monticello is at last sold and bitter as the pang was it is over—for the house & 500 acres of land Jefferson will receive Mr Hatch’s house in Charlottesville at 4000 $ for which Mrs Carr will immediately give him $3500 down (for Wilson & Jane Margaret) and he will receive $3000 cash I beleive from the purchaser Dr Barclay, the second son of poor Mrs Barclay that married old Harris. he has done very well by the children generally, but this young man married an heiress. you will say it was a dreadfull sacrifice but the debts are pressing the place going to ruin, and no other offer. I beleive he gives as much as he can afford, for after all it will be worth little to him. he has shewn much kind feeling to the family and says that if at any future day they can repurchase it he should feel him self bound to give it up. he may safely say that for most assuredly there is but little prospect of our ever seeing the day when we could do it with discretion, if at all. the evil of visiter[s] has encreased1 to such a degree as to be a tremendous draw back upon it as a residence but although that alone would not deter me yet [. . .] there are other considerations that would. the graveyard is retained, and now constitutes all that remains to the family of My dear father & Mother’s once great possessions

Of Virginia as a state I never wish to think, and much less to speak, for it would be in the bitterness of my heart that I should. there are many excellent individuals that I shall always love & esteem. during the negotiations which continued some weeks I was in a state of great agitation which was perhaps connected with my sickness & sufferings particularly an attack of cramp in the stomach that would I sincerely beleived have terminated my earthly cares if there had been no laudanum in the house. the second paroxism of which I had four was so alarmingly violent that I thought my self at one time dying, but that divine drug checked, and if it had been more boldly used would have saved me perhaps all but the first attack. Doctor Dunglison advised me in case of a recurrence to take 50 or 60 drops at once and if that did not check it to repeat the doses of 50 drops untill it did. he told V. Cary who was with me that he should probably have begun by 100. he was just setting off for the springs but was kind enough to say he would not go unless I was entirely well, and that he would leave direc[tions] with Mrs D if I did not continue well so to write to him & that he wo[uld] return immediately. he made me promise to go to the University as so[on] as I could be moved and to insure it borrowed Dr Patterson’s carriage & sent for me before he went. I was at the farm on a visit to V. Cary [. . .] who was staying with Wilson and his wife. they rented the farm of Mr Davis who has built a very large brick house just upon the hill in that beautiful wood to the west of the old house one. I have met with a degree of affectionate attention from the Dunglison’s that I can never forget after Ben had graduated, he wrote him a most kind & affectionate letter returning the $50 tuition fees that had been paid to him, and told him he never would have received them, but that he knew by experience that a man exerted him self more earnestly to acquire the knowledge that he paid for; than what he got gratis. one of the finest young men at the University is Edwin Randolph, the son of My old friend Maria Ward. his name was called I think five times as first in his different classes. he seemed very much struck with Tim; in addition to my own two handsome fellows, the girls had three other beaux to escort them to the rotunda. the day of exhibition. Lewis is quite handsome and much of a gentleman in his manners & appearance. Young Hugggins ([. . .] the Count de Lawendale) visited us at the University & was invited to dinner by Mrs Dunglison and in the evening or afternoon rather, he escorted the girls up to Monticello Monsieur Serrurier also came to see us & spent the evening. the Ds made it a point to ask every body that paid us any attention.

Cornelia & Tim are staying with Mrs Dunglison during the doctor’s absence I spent 5 days with Mrs Davis and have promised to return to Charlottesville to spend not some weeks as they pressed me, but some days perhaps a week with the Garretts. we shall be expecting Virginia in a week or 10 days. I have had so much to say about ourselves that I have not left room to say any thing to many valued friends in Boston & Cambridge. I am delighted to hear that Ellen and Willie will both return to Washington to live with me. I shall send him to the same school that little Pat goes to just behind St John’s church. Mr Sparks’s offence was praising Tudor I got a letter yesterday containing a phillipic against him (Tudor) in which how ever she says nothing of Mr Sparks’s no doubt if she had know[n of the?] kind feeling entertained for him she would never h[ave sent h?]im the papers

Mary Stearns is better. remember me most affectionately to them and the ladies of Joseph’s family to him self Dear love and to my own precious darlings the three eldest I mean, a thousand kisses I love them with all a mother’s love. do tell me if the news respecting you and some anticipated misdeeds has any foundation in truth. “a lady from Boston told Maria Woodward” and I know you so well that I am allways inclined to listen to any scandal in that shape. do burn this ridiculous medley as soon as you have read it. but I have not time to arrange my thoughts before I comit them to paper 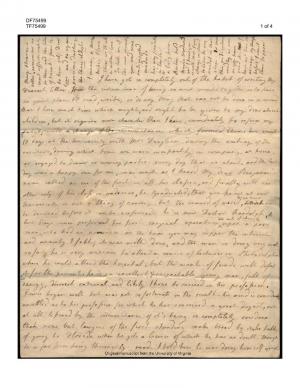