Adieu, dearest mother, my little ones are well and send much love, twinnies are fine looking fellows, not large but well shaped and strong, they seem small and delicate in comparison with the fat children one commonly sees, but in my eyes at least, they look like antelopes among buffaloes. I am not afraid of saying this to you. I have not told you I believe that Mr & Mrs Farrar are gone for a year to Europe and Uncle & Aunt Storer occupying their house, my old and well-beloved home. Mary Stearns is much better and gone a journey. Elizabeth Higginson is going to be married to an episcopal clergyman of the name of Keith, a New Englander settled in Alexandria, and I believe from all I can hear the very Mr Keith who [es]corted me from Richmond to Monticello, if so, (and I hope in any case) a [. . .] man. she will be quite a neighbor [. . .]

Susan E. is in daily expectation of a visit from her father Mr Goldsborough. I believe there is no news, but if there were I have left myself no room for it. give much love to Jefferson, Jane, and their young ones. if any thing new turns up among the fashions I shall apprize Cornelia. at present I believe the only important change is in the width of the hem. I shall answer Mary’s letter as soon as I can. Ellen & Septimia will I hope carry a fresh stock at of country roses to town with them. once more farewell dearest mother. kind remembrances to all friends.

love to the boys, young gentlemen I mean 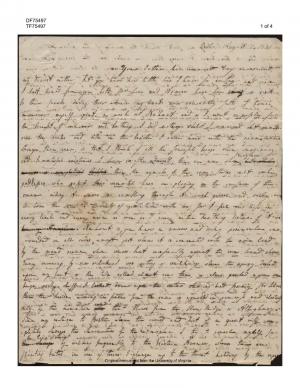