I received your letter dearest sister, two days ago, while on a visit to our kind friends the Dunglison’s, who had pressed us so much to spend the week during the meeting of the visitors, with them [. . .] that we were induced to comply & passed the time in a crowd of company, the professors seeming to think of nothing else, while the session visitors are in session, but giving dinners & inviting people to their houses. Monday was the publick day which closes the examination & ends also the session at the University, on that day four of the young men deliver orations or read essays in publick, the names of those who have distinguished themselves in their several classes are read aloud by the chairman of the Faculty & the graduates in the different schools, receive their diploma’s. we were present on the occasion to see Ben receive his, with the title of Dr. & permission to practise on all [. . .] who will be kind enough to trust themselves in such inexperienced hands. Dr Dunglison told us that he had gone through his examinations with credit to himself & he has now a profession which will I trust secure him an independance, from his character & general conduct we have now little anxiety about his future lot, for we are persudaded that he will not disappoint our hopes & expectations & that he will be a happy & a respectable member of society. a more affectionate or kinder heart than his, I am sure no one possesses & in the study of the profession he has chosen, he has shown than that he is not wanting in industry & perseverance. one of the most distinguished & most interesting young men at the University is Edwin Randolph the son of Peyton Randolph, him self, a brother & a little sister ten years of age, are dependent on their uncles by the mothers side & he seems determined to repay their care by devoting his whole soul to his studies. both [. . .] at the end of this session and the last, he was distinguished1 in many of his classes & has graduated in more than one school I believe. he is a tall thread paper youth, with a sickly complexion, but his smile makes him absolutely handsome & there is something so gentle, so quiet & so unobtrusive in his manners, that I felt strongly interested in him upon a very slight acquaintance. we left the University on wednesday, expecting to find Browse here on his way to Louisiana. but he has not yet arrived. Virginia has probably told you of the appointment of surveyor general which has been given him & which will oblige him to live in Donaldsonville, we all feel sorry to part with him, his brother & Virginia particularly so, but I hope he is too well inured to that climate to risk much in again exposing himself to it. he talks indeed of paying us a visit next summer & I hope he will do so. his stay in Virginia now will be a short one, not more than a few days I am afraid—

in my return to my own state, I enjoy few things so much as the sight of our mountain scenery, I never saw it the country in a more lovely dress than it is now, there has been no drought as yet to destroy vegetation & the fields & nearer mountains look beautifully green & in make a fine contrast with the blue mountains. I could not help wishing that you could see the University as it looks now. mama thinks the face of the country is improving in appearance, perhaps she is right, I certainly never admired it more than I do now & the view from our own mountain looks as it ever does at this season, surpassingly lovely, Cornelia & myself visited it from the University, in company with the young Hyg Huygens who paid us a visit several years ago with the Duke of Saxe Weimar, he has travelled over a great part of South America since then. he seemed much struck with the prospect, though he saw it for the second time. & while looking down on those two broken irregular ridges, of the blue mountains & the other chain within them, he repeated several-times, that they had absolutely a volcanic appearance. we had at one time a thought, that if it should so happen that the Mr Poindexter’s exertions in our favor met with success, we might possibly find that we could pass our summers at Monticello, this I think would have added more to our happiness than any change in our situation which I can conceive possible, but the idea was scarcely formed before [. . .] a purchaser presented himself whose offers appeared so fair that I believe brother Jefferson will not hesitate to accept them if the gentleman does not change not his mind before his return from a visit to some distant place, before which time he would not close the bargain. our speculations on the subject therefore will in all probability end in our bidding a final adieu to this spot so favored by nature & so much endeared to us by the memory of our grandfather and of past days when we were all one family drawn together around him. it is indeed a sad recollection to look back upon the break[ing] up & scattering of those who have so long lived under the same ro[of.] yet this is what awaits every member of a family as he, or she, advances on the path of life. I am glad to hear that your little girls are doing so well & was much pleased with Bessie’s birth day present to her Aunt Cornelia, as well as with hearing that you had written so much in my Album, be assured dear sister that I value every word written by your hand too highly ever to see it without pleasure, however or wherever it may be written, nor can I ever see with indifference anything that reminds me of you, the little marginal notes you have sometimes made in books you had have read in other days & even the pencil strokes pointing out the passages you approved [. . .] which I either know or suspect to have been made by you, never fail to excite in me feelings of pain & pleasure as often as I come across them. if you have not sent away the Album before Hannah Stearns returns to Boston, she has promised me to contribute something to it. she will leave us now in a few weeks. & will carry with her the good opinions & the an affectionate interest in her future lot, of al the family here as well as of other friends that she has made. all here are well except brother Jefferson who came in a few hours ago scarcely able to walk in consequence of a kick he received from his horse exactly on the knee, fortunate[ly] (he can scarcely tell why) he did not receive the full force of the blow, which must have shattered the bone, & he has escaped with a very severe bruise, the shape of the horses foot & every nail in a shoe that had just been put on are distinctly visible on one part but from the circumstance of his having walked at all, though with great difficulty we presume the bones are safe. he was near fainting with the pain at the time, but was well enough to ride to the house afterwards & lying quiet on the sofa has not suffered much since. Septimia desires me to send her love to you & kisses to the children & Sister Jane likewise sends you a message of love & hopes it will comfort you under the misfortune of having 5 children to recollect that she has 8 & is expecting a 9th we heard by the by from [. . .] that you too were looking forward to the same good fortune is it true? ever you own dear sister. 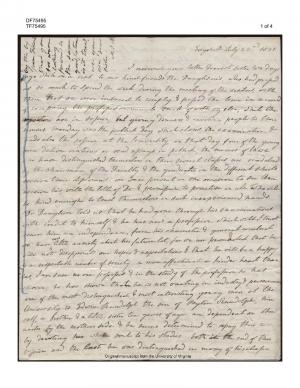