We received a letter from George yesterday, my dear sister, dated the 6th as he finished it they were just anchoring in sight of cape Henry & I suppose sailed fairly the next day. George had just got a sprain some days before & although he says it was getting well I am afraid it was bad as he mentions that he could not walk. He says he had got a letter from you the day before & would answer it by the first opportunity. This is the second we have received from him; the first was in answer to one mama wrote while in the most wretched spirits & although she tried not to let her excessive depression appear it was evident enough to affect George very much; his letter shewed a great deal of feeling & he was willing to give up the navy & try some other profession as soon as he returned home & promised never to contract any bad habits; that is drinking & playing cards. we could not [. . .] prevent the tears from coming into our eyes at the earnestness & affection with which he wrote. he is a fine boy, one of uncommon truth & integrity & very intelligent; his temper is his fault. he has improved very much in his manners; having gone more into the world he has become easy in his manners; he went with me to Mrs Vails the day before he left us & I was quite pleased with his behaviour; he entered into conversation with them all with perfect ease & shewed a good deal of information for a boy, & all the time was modest as was becoming his years; I think they were pleased with him too; they said they were; in Virginia they thought of him as we do & strangers have confirmed the opinion formed by his partial family; Edward Vail wrote his [. . .] sisters that he was a very fine intelligent boy & would make a very good officer. We got a letter from Maria Woodward dated the 5th she says the vessel has just weighed anchor; she had been lying opposite to their windows & they had watched George with a telescope sometimes pacing the deck with his chin resting on his little black collar looking as important as the oldest officer on board, & sometimes with his waist encircled by the arm of a lieutenant who seemed his protector & comforter; we formed conjectures who this could be who was so kind to George; it might be John Nicholas, but the Nicholases have not these caressing manners; it might even be Mr Hodgson, who is attached to the mission to Constantinople, who is a Virginian & made us many promises with regard to George & they say is a person to keep his promises; but was most probably Edward Vail who also promised to be kind to him, who has these manners, & is fond of children. Every body says he (George) will be a pet on board because he is so young. I have written you these details dear sister, because we have been interested in every trifle that concerned him. Mama thinks incessantly of him & is not in good spirits but is very much better than she was some time ago when she pined & lost her health & could not be comforted; but she is better in all respects now. We shall leave this for Virginia the 25 of the month, & shall probably spend a day with Mrs Madison on our way to Edgehill. The most important piece of news (at least for us) that I have to tell you, is, that the president has made Nicholas his private secretary; the salary the same that Nicholas had as clerk, that is 1400 $. the president offered 1500 but N. would accept no more than he had as clerk. The private secretary who came before him had only 1000 I believe. We do not talk of all this of course, indeed as yet we do not mention the thing at all though of course it will soon be known when N. enters upon his new business. Nicholas refused the invitation to carry his wife & children to the president’s house, but if he is to be separated from them more than he is now I shall give my vote for their going; Ni Virginia’s life will be too lonely when we are gone; but this remains to be seen; she as you may imagine does not ambition being the mistress of the ceremonies of the president’s hou[se. Wh]y Mr Donnelson [res]igned I do not know but Mrs D. has not been [. . .] for nearly a year. People have scarcely done talking of the change of the whole cabinet; Mr Ingram & Mr Branch resigned unwillingly & as you have seen from the papers. Mr B. was looking out for a house the very day (I heard) that the president had the interview with him which occasioned his resignation, & this said resignation was sent in a few hours [. . .] after or in less time perhaps. all this happened on his (Mr Bs) daughter’s wedding day; we were at the wedding party that evening; all the world was there & heard the news there; they were astounded; they could not laugh or dance, they stood together in groups & talked seriously or walked up & down the rooms; the bride’s family was grave, the bride’s maids (the daughters of the officers of the cabinet) were in consternation; I thought to myself before I heard the news; “certainly [. . .] wedding parties are the most stupid of all parties.” Mr Livingston is here & Browse has gone to New York for Mrs L. to look out for a house; I have heard they think of Mr Van Buren’s, if so they will be our near neighbours. All of the secretaries & their families are still here except Mr Branch’s family—he has broken up house keeping & takes his meals with his neighbours; he has occasionally breakfasted with us; he seems to be a good old man. We all lamented for Mr Van Buren & I was very sorry for all the ladies.

Jane Cary is by this time married Mary passed some time ago on her way to the wedding. We expect them in Washington immediately. Mr Smith seems a very amiable gentlemanly man, educated & refined & they say with talents. he is exceedingly in love.

I make up for writing rarely by the length of my epistles, & nothing but the limits of my paper cuts short the details & prevents my observations on these interesting facts. Adieu dear sister kiss all the dear babies for me & believe me ever your affectionate sister. Mr & Mrs Lee from Boston are here. Billy Bourdeaux as they call him here. 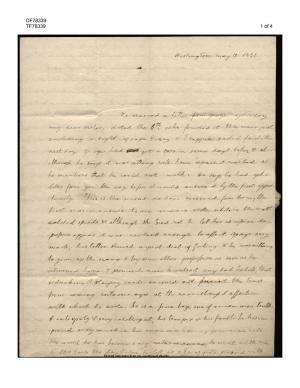