I have actually torn up two letters, my dearest Mother, and I am writing to you on their backs seeing that paper is scarce. they were written in the midst of such a “hellabaloo” that they were utterly unintelligible even to myself, and I consigned them to the flames as unfit to be exposed even to your indulgent eyes. the girls are now so constantly with me, that I have not one moment of quiet or leisure, and whatever I do at all is done on under circumstances of & disadvantage which none but a mother or a nursery-maid could understand. my comfort for all this is that the children do so much better are less likely to acquire bad habits under my eye than when confined to their nursery, where both their tempers and manners are hurt by injudicious attempts at government & examples of Marblehead breeding. good Mrs Coxe, with the best intentions possible is neither a [. . .] Miss Edgeworth nor a female Chesterfield, and does much better by Tom & the bad twins than she can do by Nell & Bess.

Ellen is so much improved since she has been solely under my management that you would scarcely know her. she is orderly & obedient & very rational. her progress too, in the little I have attempted to teach her is quite encouraging for her future proficiency, & were I regular in my attention to her I think I should be rewarded for my pains. but I have found it impossible to do more than give her short & occasional lessons. she has improved in her spelling greatly has learnt to read figures as far as 100 & has advanced to “[. . .]six bonnets & six bonnets” in Emerson’s Arithmetic; in Geography she can tell you the shape of the earth it’s general divisions with some few et ceteras, & these not by rote but with a real understanding of them. she will amuse herself after dinner by cutting her apple in two calling [. . .] the halves the two hemispears & then showing Bess the cardinal points, the poles the equator, the position situation of the four quarters of the world and the island of New Holland. she does not neglect her sewing work either, the counterpane is finished washed & fringed and spread over the Doll’s bed. Bess, I do not think wanting in capacity, but she is such a head-over-heels, uproarious kind of person that I dread to undertake her. I wish to send them both to school next month & Joseph wishes it also, so that if I can make out to pay the twelve dollars a quarter for the two, I shall consign them to Miss Farnham.—Tom improves daily, without and even his father begins to take notice of the change. he is very affectionate & has transferred to me the preference of which you were the object as long as you stayed. the Twins are right boys, obstinate, self-willed and troublesome. very sweet babies notwithstanding, healthy, sprightly, and good natured as long as you wait upon them and amuse them, but already masters of the Nursery and the nursery women and beginning to tyrannise over the others, children stretching out their hands for play-things & pulling hair & scratching faces with a spirit worthy of their sex. they are just the same size but grow more unlike in features every day. the oldest resembles his father and Ellen, the younger one looks more like my family.

I have filled two pages with the perfections of my young owls shewing thereby the wisdom of the mother bird.—I am very sorry to hear dear little Jefferson has been so ill—I have long thought the lung-fever was better known, by nature if not by name, among the southerners than they are themselves aware of. In this northern climate it is the great bug-bear of mothers and frequently proves fatal, which I presume would not be the case in warmer latitudes. Mrs Ritchie has been near losing her little girl this winter, & two of James Otis’s children were carried off by the same dreadful complaint. I have been in constant anxiety about my own darlings who have escaped thus far, except that they have now bad colds, but the weather is moderating & after this month the Lung fever becomes less frequent and less dangerous. for a week past we have had weather that for this climate may be called pleasant. but oh how different from the balm & sunshine of a southern Spring. I would give a great deal that my visit to Washington were in anticipation for the next month instead of being a retrospect to increase my regrets that it cannot be repeated. I should find you, the bustle of the winter over, Congress dispersed, and leading the quiet lives of villagers. how delightful to enjoy your society exempt from the corvée of parties & ceremonious visiting. and then that delicious air of Spring, that “sweet breath of morn with charm of earliest birds,” and, “herb, tree, fruit, and flower glist’ring with dew.” there is nothing like it here, no softness no fragrance, no Spring. even if the sun shines there is a chilling east-wind to mar any pleasure you might derive from his beams; the few flowers look wan & sickly and starved with cold & exhale no perfume. It is in truth a “[. . .]cold and cloudy clime,” where I may die but where I was not born.

The picture about which I have inquired so often was not the Madison but the Jefferson, the precious profile, which went with you, but of which you have never spoken. I presume however that it arrived safe. Virginia’s books, the two Barbaulds & the Worcester, have been waiting some time for a conveyance, I have a prospect of being able to send them in a week or two. Mr Sparks wrote to Joseph to thank him for your letter which at least procured him a civil reception from the Lady of Morrissania. I should enclose this letter of Mr Sparks to you but wish to spare you the [. . .] postage. it is very civil & grateful (to you) and proper. I am sorry George is going to Virginia. he would do much better, I think, at some school where you could keep your eye upon him. there is no influence like that of a mother. farewell, my dearest mother, I shall leave my letter open until the afternoon, but have nothing to add but except love the most affectionate to all including Harriet Hackley if she is still with you.

I have always forgot to say that one of the names of La Fayette [. . .] one of my twins I had thought of calling one of my twins after La Fayette but Joseph & myself afterwards determined that in the whole magazine of names with which the great liberality of his god-fathers & god-mothers had supplied the excellent general (Marie-Paul-Jean-Roch-Yves-Gilbert-Motier-La Fayette,) there is not one which sounds well in English. as for the twin we have ceased to think about naming him at all & probably shall not give a moment’s attention to the subject until the christening cake is baked. Tom calls them “bad baby & twin cry.” 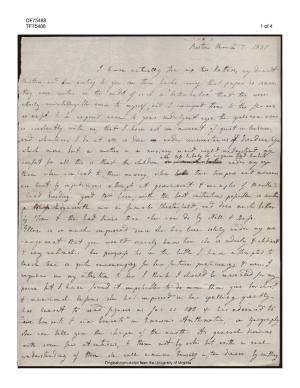