You have some reason to complain of us dear Ellen but not as much as you seem to think. a slight sketch of our family matter will explain the thing better than any other way that I can devise, ad and would force even Miss Brigitina to acknowledge that there may be cases in which “energy can not do every thing.” I staid from church on sunday for the express purpose of writing to you, I began a letter that was so often interrupted that some of the news grew cold before it was finished, some circumstances changed the posture of our affairs, & finally a visit of a part of the family to Alexandria and a rainy day coming to gether, I have ventured to throw it in the fire and risk a new one. dear little Jefferson has been dang[er]ously ill as are many other children of the city at this time. they say it is cold, but the lungs are much affected, I cannot help suspecting it is what you call a lung fever. this is the 6th day with him, a dose of calomel on the 4th broke the alarming violence of the disorder, but he is still though better, yet extremely ill. he has had many attacks this winter and always requires as much nursing as a baby in the first year. we have but two female servants one a cook & washerwoman who has an assistant every Monday only. Ellen the nurse is rendered still more slothful & helpless by ill health, we apprehend pregnancy, she is our sole chamber maid, & nurse. we have kept only one fire below stairs in our littl[e] dining room in which also we have received our company, and a fire in my room. & the nursery. Harriet sleeps with me, Cornelia upon the sopha in my room & Mary & Septimia in the little room, dressing & undressing in my room, which operation is also repeated once or oftener for morning visits received or paid, parties occasionally & &, you remember that we are without closets or furniture for putting away our clothes, all these circumstances in a family of eight grown persons going pretty much in to company with few servants and two sickly children crowded to gether in a nutshell of a house are certainly very unfriendly to regular habits of any kind, particularly in letter writing that requires some thing like quiet. I mention these circumstances not from impatience or to complain, the thing is irremediable while the cold weather lasts, and we seem by tacit consent to bear patiently with them as a transient evil which the return of spring will considerably lessen, but to shew you dear daughter how without any indifference towards you we have been prevented from expressing by letter the thoughts and affections constantly recurring. and talked of, though not committed to paper—I received a letter from Mrs Morris a few days since, in answer to two of mine, barely acknowledging the receipt of them but carf carefully forbearing to allude to the subject of them (Mr Sparks’s request to see Mr M—s papers) but enclosing [. . .] one from Dr Hossack, aluding to some conversation between them, in consequence of which he advises her to employ him Mr Sparks to write Mr Morris’s life as a person entirely competent & &. we may infer from that that she took the subject in to consideration at least, but what the result of her meditations might would be, no one could pretend to determine—

Mr M. Cleods school is for boys less advanced than George; but he recommended very highly a Mr Hughes as entirely competent to prepare him for West point or the University, and I determined to send him there, but Jefferson has pressed so much his going to Virginia that when the term commences again the first of march I shall send him. I have been strongly advised to chuse the navy in preference to the army for him, as a more certain provision, and infinitely more respectable & agreable. what Mr Archer who pressed it very much upon me said was that in the Army he would probably be sent to some fort to the westward to waste his youth in the most detestable manner subject to fall in and always liable to contract bad habits from idleness & bad company where as in the navy they were generally in service, and had opportunities of visiting every part of the world. & he George inclines [. . .] for the latter. time & circumstances will I presume decide the question for him, in the mean time I will try and give him a good education and leave the rest to him who cares for us all—a paragraph appeared in the Telegraph, headed “a Memorial from Mrs Martha Randolph sole surviving1 descendant of T. Jefferson praying relief & & &.” you may conceive the horror it excited in the family. Nicholas went immediately to enquire in to the thing & have it contradicted. he was told that Mr Poindexter meant to bring forward a bill to that effect, that he would himself explain the error, and have it rectified in the paper. he made a very handsome speech really, mentioned the case of M. de La Fayette, and proposed a donation of $— Townships—it was referred to a committee every member of whom are decidedly friendly to the family, but Mrs Decatur’s claim & Col. Monroe’s both very unpopular here, were brought forward with encreased clamour & the whole thing dropped. I was told by many persons that the members said they would a thousand times rather give me the money than Mrs Decatur & & but still I have no idea that any thing will come of it—Harriet is much admired and Tim is generally thought a beauty the girls all look fresh & well and are all of them stylish handsome gir[ls] when dressed for a party. Septimia was the “Monimia” of a certain little poet[ic] efusion, but that folly has passed away; Harriet was the reigning favorite of the a day, but that also is nearly gone by. B. is one of those who is always ankle deep in love, as he says himself, but never deeper. the Monster of the day is Mr Middleton from of S.C., latest from Russia. his whiskers the most important part about him meet & form a tuft upon at the tip of his chin a little longer than the rest; a fringe about half an inch wide unites them again over the upper lip, and encloses his mouth very ridiculously; his collar is black and the affair below it of the same colour, so that not a particle of linen shows any where. they say he was followed in Russia from a fancied ressemblan[ce] to the pictures of our Saviour. he is staying at General Vanness’s where he seems to be completely the Lord of the Ascendant.—I think we are “gaining ground” and making friends though the girls are too reserved & poor to be as great belles as many infinitely inferior to them, but more forward & confident. [. . .] the thermometer is ready and will go with the Oliver Cromwell by some of the members. they might have been sent by Mr Gorham but he went off in great hast[e] to a sick son without our hearing of it untill he was gone. remember me most affectionately to dear Joseph and my darling Nell dont let her forget me Tom dear sweet little fellow will have lost all recollection of me when I see them again, Bess will be a reasonable well behaved little lady & the Tins running about & “making confusion worse confounded” in their nursery. poor Mrs Cox how I shall pity her in the midst of her noisy little crew. do remember me most kindly to her, and say something kind to each all of the servants to each of whom I feel indebted for many little acts of attention and civility for which to my sorrow I had it not in my power to make any return—I dont know that I have a right to use as strong a term as affection to Mrs Coolidge & Mrs Storer and yet a weaker one would not do justice to my feelings for them, pray remember me to them

In as warm terms as propriety will justify say something also to the other members of our the family. & to Mrs Otis Mrs Ritchie Mrs Pratt the Misses Ross and all who think enough about me to ask, for certainly there are many in Cambridge and Boston that I love more than the reserved manners of the North would approve of my expressing

Dear little Jeff. is much better. Feb. 23d the long bridge was carried away a few hours after George & the girls had past over 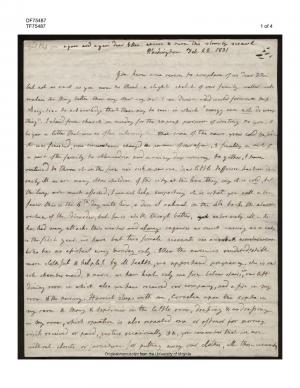