I have been intending all the afternoon to write to you, dearest mother, but it is now past six and I am just beginning my letter; the children have been so much on my hands that I have found it impossible to get rid of them long enough to carry my intention into effect, so if I do not fill my paper you will know it is for want of time between day-light and dark to write three close pages and a half, the usual length of my letters. My invaluable Mrs Cox went to Marblehead on a visit to her children one week after my arrival in Boston, was taken ill and has not yet returned nor do I know when to expect her—in the mean time her place in the nursery is filled by a creature the exact counterpart of Molly Warren except that she is not so good-tempered and affectionate; you may imagine how I get along under such circumstances with my three little ones, all babies together, and so helpless and unwieldy as I am from my situation—oh it is a “chien de metier” que le mien” and I know not from what cause that at five months I am as great a sufferer as I generally have been at seven or eight; whether the fatigue of my journey produced the effect of hastening matters or that other causes may exist for my present sufferings state I cannot tell—the wise ones comfort me by saying it will be all the better in the end, but I believe I had rather suffer a little more then than be for four months longer such a good for nothing, useless, complaining creature as I am at present—but a truce with such disagreable topics, Mrs Bulfinch is expected in town in a few days—how I wish you were coming with her; you will be here however as soon as you can I am sure, I anticipate your visit, (both on your own account and mine,) with greater pleasure and a more impatient longing for the time of your arrival, than I can well express—I know your health will be benefitted by the change to a northern climate, and I shall enjoy your company more than if I were able to go abroad as in Washington. there I saw little of you, here we should be much together and yet you need not be confined on my account, but go out whenever it was pleasant to yourself, and no oftener. Mr & Mrs Coolidge with Susan & Annie, Catherine & Hetty are to leave Boston the day after to-morrow for a tour of five weeks through the State of New York; they will probably go as far as Niagara; Annie has had the scarlet fever & is in feeble health, Catherine is dyspeptic & upon the whole it was determined to make this little excursion principally for the benefit of the invalids. the house in Bowdoin Street is under process of repairing, and when completed the family will remove thither & Thomas & Susan take possession at the Square. I envy them that fine garden and their near neighbourhood to Bowdoin Street but my own house is too pleasant to make allow of any farther regrets. I wish however that you had one like it although I always think of your present establishment as very pretty and comfortable. I think however it would be on many accounts desirable for the family to disperse for about six weeks or two months from there during the great heats—you have so many friends in Virginia and the expense of going there would be comparitively trifling. Virginia & the children, particularly dear little Jefferson, would be much better for a breath of country air, & the girls would be revived by an escape from the dusty deserts of the Washington streets during August and September. Mrs Madison, Aunt Cary, Jefferson, Mrs Dunglison, Mrs Garrett, Col. Carr, Judge Carr, [. . .] how many persons there are who would be delighted to receive them whilst you were comforting me by your presence here. only think, when living at Monticello, your house was a home for all who chose to make it so—it is not for you or yours to be scrupulous or fearful of intruding—besides you are personally beloved, respected, admired, and cannot fail to be welcome to old and tried friends like those I have named. [. . .]

I was very sorry to hear of poor Mammy’s death, although [it?] appears to have been a tranquil & happy one. there are fortunately no black Fanny Wrights to wrest from the poor negroes such hopes & comforts of religion as they are able to obtain—this “unsexed thing who dares to scorn her God” is again in Boston, where she divides public attention with a Rhinoceros the first ever brought to the United States—it is strange that upon her last visit her competitor & rival was a learned Dog who could play cards & tell the hour by a gentleman’s watch. She can do no harm in New England where she is an object simply of curiosity, but I feel mortifyied, as a woman, that and as having formerly been a personal acquaintance, that one who is alike a disgrace to her sex and to her associates, should belong to me by either of these ties, however general the first or disavowed the second. I wish she would go to Hayti & marry president Boyer who is said to be an admirer of hers. I beg her pardon I forget that but her doctrine is that for the happiness of both parties a preliminary step to the civil contract of marriage is should be to live a year or two together without the contract, in which case the President would probably beg off. I am finishing my letter by candle-light—adieu my dearest mother or rather I hope “au revoir.”

Love to all—& thanks to Cornelia for her letter. 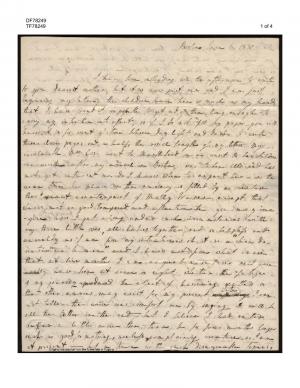