A rainy sunday, my dearest mother, gives me the leisure I have been waiting for to write to you, I am sorry not to go church, but much pleased to have an hour at my own disposal which I can devote to you. several gentlemen of my acquaintance will be arriving in Washington about the same time with this letter, among others Greenleaf Bulfinch whom I dare say you recollect as a theological student in Cambridge, he took charge of a little packet directed to the care of Nicholas and containing a couple of “soun souvenirs” for the Misses Vail. the one a little book called the golden Lyre published in England and of which a few copies were brought to Boston. I saw one of these and thought it so pretty tasteful that I got one another sealed up just as it had crossed the Ocean & sent it to my old friend Eliza. I had not time to look for any thing equally pretty for Nancy and could think of nothing but a reticule which had been presented to me and I was glad to transfer to better hands. I have not written to either of the sisters for a long time, not that I [. . .] my feelings towards them are changed but I am now so out of the habit of letter-writing that my pen has lost all it’s ease & fluency. I have not leisure to make repeated attempts and nothing else I am afraid would enable me to produce any thing but what I should be heartily ashamed of. I do not want them to suppose that Ellen Coolidge is so different from and inferior to Ellen Randolph, and this remains of girlish vanity, which I am ashamed of, is strong enough to make me drop all my correspondents except yourself and the girls. Mr Sparks an old acquaintance of yours has also left Boston for Washington, and I shall long for the return of some of our travellers that I may hear of you all from persons who have seen and spoken with you. I am sorry you are so far from Mrs Gorham particularly as her mourning must keep her from going much into general society, and you will scarcely have an opportunity of becoming acquainted with her.

I received a letter from Ellen Bankhead a short time ago and was much surprised to hear of her father’s marriage; I hope his new wife may have neither the will nor the power to exercise any bad influence over Ellen either in her character or situation. a new brood of children will to be sure affect her prospects of fortune, but I hope a good marriage will may eventually secure her from all dependance upon the unnatural being to whom she has the misfortune to owe her being existence. she seems so formed to be happy and respectable in the discharge of domestic duties & the enjoyment of domestic pleasures that I could not wish her a better fate than to become the wife of an amiable & deserving man. What is the reason that I never receive a letter from Washington? [. . .] if it had not been But for dear Ellen I might be now be in a state of uneasy suspense as to what had become of you all. surely in a family of six ladies, there can not be so absolute a want of leisure as this long silence implies. Why even I, with my three little children and my numerous duties, have written three times, including my present letter, since I have received a line from either of my four sisters.—I hear now absolutely nothing from Jane & her little ones; can you tell me whether she has put up any hams for me this last winter. I have been so unfortunate in the last, that I shall fear to undertake the keeping of more than a dozen or so, hereafter. several ha I have found entirely spoilt & almost all touched in some parts, what remained to be sure were excellent, but a cellar is a very bad place to keep them, and I can command no more favorable spot.—I am just now engaged in quite a difficult undertaking the procuring a governess for Mrs John Smith. hitherto I have been unsuccessful in my attempts but the season is now approaching when I may hope for better fortune. the young girl recommended by Hannah Stearns and patronised by the Stearns family is utterly unfit for and incompetent to the place, & after consulting a number of the best judges I [. . .] was under the painful necessity of advising Mrs Smith by no means to think of employing her.—I received a visit from Elizabeth Higginson three days ago who gave me good accounts of all our Cambridge friends except poor Mrs Follen whose situation is I fear a very uncertain one. she expects to be confined & the state of her health is such, that considering her forty five years and it’s being a first child, the general idea is seems to be that she cannot survive. I wish she could be prevailed on to waive all considerations of family connexion & employ Dr Warren rather than Dr Channing. his skill is such that she might be saved through the exertion of it. Dr Warren has met with a heavy domestic affliction in the ill-conduct of his eldest son a young man w[hose] habits have been always such as t[o] distress his friends, but lately in a tavern brawl he ha[. . .] [. . .] stabbed one of his drunken associates, and although the wound was not even dangerous yet his character is considered as completely blasted. the strict ideas of the New England people, fortunately for the good of the community, render such an offence unpardonable. young Warren has been shipped for France & can probably never again return to his native city but to be branded as an assassin, and driven from respectable society.—The day has cleared up bright and almost warm—so far the close of winter and opening of spring have been almost worthy of the south west mountain. but it was from the terrace of Monticello that I used to enjoy the first sweet breathings of the season as I can never enjoy them again—for I can never again be as young, and youth is the Spring time of both the mind and heart of life & happiness—but then I shall soon be growing up again with my daughters and a new spring will commence for me—I had forgotten then that when I talked of no returning youth. farewell my dearest mother, write to me if you can soon. give my love to all around you & accept the same from Joseph and the babies. I wish you could see them all which I hope you will ere long as I see nothing to prevent you from visiting me.—ever your own devoted daughter.

Joseph’s mother desired me some time ago the first time I wrote to you to offer her thanks for your very kind invitations to Susan and to assure you of her sensibility to your goodness in giving [. . .] them. 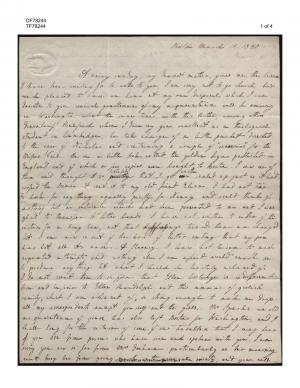