A rainy Sunday, my dearest Virginia, gives me leisure to write to some one of my friends, and as I have been owing a letter to you for a good while I shall give you the preference. indeed I have to reproach myself for delaying so long to thank you for finding time to think of me; but for that your last letter of yours I should have known nothing of your movements or intentions during the two first months of your residence in Washington, for that space of time elapsed without my hearing one syllable concerning you the family, except what you had told me, & what Mrs Bulfinch occasionally mentioned in her letters to her sons and Aunt Storer. Mama at length broke the silence, and since the receipt of her letter I have to acknowledge another from Mary—she speaks of your being very much hurried & pressed for time; at present I presume that this is unavoidable, but after a time while you will be obliged to fix some limits beyond which you must not allow yourself to be pushed. carried. I would establish certain regulations and adhere to them as steadily as possible. I woulg would go only to a certain number of parties; the girls must not publish themselves abroad too much. they will render themselves cheap by so doing, & exhaust their popularity and diminish their respectability. then where there are so many of you it is surely unnecessary that all should set up every day to receive company. why not take it by turns to stay in the nursery where of course you must have a fire, and employ yourselves there more usefully than you can do in the parlor. one or two may always be dressed and ready, whilst the others are sewing, writing, or even reading when the babies are still or out of the way. only you should be strict in your determination to take turns in this domestic retirement; otherwise it will be an excuse for each one of you to indulge your own particular inclination whether it be for too much seclusion or too much company. you individually I know, are fond of keeping in the shade, and must compel yourself to take part in the entertainment of your guests. the Vails used to manage these matters remarkably well and perhaps you can get a hint or two from them. Eliza, (whom, in a parenthesis I used to think, one of the most sensible & discreet women I ever knew,) told me she found little or no time for reading during the winter season, but a great deal, as soon as Summer brought long days & the absence of Congress. But you will think I have given quite enough of advice for one letter; to talk of something else; Mama has either received or will receive a dress pattern of black bombazin sent by Joseph’s mother; this compliment was paid to all those whom grandmama had distinguished by her regard, Mrs Bulfinch, Mrs Greenwood, mama, and I know not how many others; Mrs Coolidge is always glad of an opportunity to do whatever is kind and polite, & grandmama having expressed a wish that after her death, her friends might receive some little attention of this sort, the thing has been done upon the most extensive scale which liberality could suggest or propriety warrant. there is also an obituary notice or rather two, in one of which you will recognize my hand, the other is Joseph’s. they were not intended for newspaper publication, and only a few copies have been struck off for those who were interested in the subject.

I scarcely know what to write about for I have lost the fluency of my pen as much as of my tongue; I am beginning, as a sportsman would say, to hang fire with both. one reason I never write to the Vails, is, that I know their quick wits would instantly note the change. Nancy would yawn openly at the tenth line, & my dear prudent Eliza pass her hand over her mouth to conceal that she was doing the same. but I love them as much as ever, and you must not let them think otherwise.

Our good city of Boston is in rather a dosy state just now; so many persons have failed that every body looks grave & frightened. there are few large parties and those not particularly gay. mama’s old acquaintance, Mrs Humphreys, having reached or passed the age of fifty, has made a love-match with a co polish adventurer whom nobody seems to know; a certain Col. (he says Count) Walewsky. her fortune of $ 300.000. dollars she surrenders without the reservation of one cent. this absurd marriage has been talked of until, it like the green ass in the fable it has ceased to be thought of. it took place the 31 of Dec. & the same night had been chosen by a party of young men to give a ball, in the general dearth of amusement. the ladies, contrived on this occasion to be very splendid notwithstanding hard times; my black gown, of course, kept me at home, where I was quite satisfied to be with my husband and little ones. my childr[en] engross me more and more; Ellen scarcely ever quits my side, she is so sensible and discreet, that she is but little in my way; I never any more think of her doing mischief of any kind, then of for she inherits in a remarkable degree, along with her father’s person, his love of order, and his carefulness. Bess is precisely the reverse, and gives more trouble and makes more work in one day than Ellen would in a week. but she is so fat and funny, there is such a plebeian good humour and plebeian shrewdness about her that she is quite irresistable, & much the more general favorite of the two. she has also firm health and a most unlady-like appetite, whilst Ellen’s extreme delicacy keeps me always trembling for her. poor little creature, she is so thin and pale & feeble, & there is something so feminine & so fragile in her appearance and manner, as often to make my heart swell and ache as I look at her. the boy is like neither of the others, and I think him his mama’s own child, the only one of the flock that is the least like me. farewell, dearest Virginia, love to all the family, my cordial regards to my old friend Browse, and kisses for the children. Thomas Coolidge says that Pat is a great beauty.—do not forget to keep Ellen Bankhead in mind that she has a yankee aunt and cousins. why cannot she sometimes write and let me know how you all do. remember me to Mrs Cutts—I have not forgotten how very kind she used to be to me in former days. Joseph is at church but may have some message for which I will leave a line.your own.

dear V. Say to Mother that it is a possibility that Ellen and I may see her in the course of a fortnight:—I do not mention it as an arranged affair; but, merely, as talked about. If we make a flying visit, we shall, perhaps, be accompanied by my sister Susan: love to all; Yrs, ever, truly,

I am almost sorry Joseph should have written what he has, for there is a bare possibility, certainly no probability, of our being able to run away from the children for two or three weeks. I could not take even one of them without a servant, & this would make the whole thing too expensive. 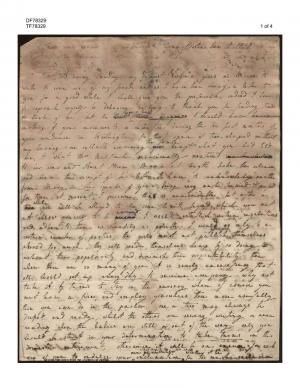