It is long since I heard from you, my own dear Virginia, but still longer since I have written to you, and I have no right to complain of, however I may regret, your silence. I know what the trouble of children is, and do not wonder at your making what I am fain to call you, after Mr Matthews, “a pretty considerable ___ bad correspondent” (the word between the considerable and the bad, I leave you to supply.)On Friday last, the 17th, Greenleaf Bulfinch returned to Washington on a visit, and was the bearer of a small packet, containing rather a heterogeneous mixture of religious tracts for Mary and yourself, and caricatures for Jane. she is so wicked, that I have little doubt she likes her part best; there was also a pattern of pink french calico to make a frock, not for Ellen Wayles, as Joseph wrote, but for Carolina, whom I have never seen, but wanted to claim a share in, by means of this little present. I was out, and Joseph made up the bundle for me, and substituted E—s name for little Miss Ramsay’s. I hope your suspence with regard to Nicholas is over long ago, and that he is now at Edgehill with you. you may tell him we have been entertaining one of his hang dog comrades for him, to the great shame and scandal of all decent people. no less a person than the notorious Major Davèsac, who has been making a tour through some of the Eastern States, & coming to Boston, where (fortunately for him) he was altogether unknown, run the risk of being altogether neglected. Joseph fell in with him, and, entirely out of compliment to Nicholas, invited him to dine, when the gallows-bird made himself so agreable, so fascinating I may say, that had he remained, he would probably have received as many dinner invitations as we had there were persons at table. [. . .] We sent for a french cook upon this occasion, the only one in Boston, and very expert in his art, but just such a rouè as Davèsac himself. I thought I had Satan in the parlour and his head-cook in the kitchen. he came at eight and about twelve was completely royal. my yankee help stood aghast, but drunk as the creature was it seemed to make no difference as far as the dinner was concerned; that was excellent, but I wish you could have seen the state in which things were left. it required an extra woman three days to clean up after him.—seriously speaking, about Davèsac, after he had been invited, the only gentleman in Boston who knew his character, declined dining at the same table with him, & told Joseph so much of his [. . .] ill of him as quite frightened me; and I was heartily glad that leaving Boston as he did relieved us from the responsibility of being the having introduced him into society here. I wish you would ask Nicholas whether it is true, that he has been turned out of all decent company at home, for a series of profligacies and atrocities, which, not even the French of New Orleans, could tolerate.

We are all dreadfully dull here every body failing, and business at a stand. tell mama that Cornelius Coolidge is on the bankrupt list and the little sulky house, may be had, I suppose, for a trifle. you may likewise say to Cornelia that poor Fanny Apthorp is dead, having survived Mary only seven or eight months. Mrs Apthorp is left without a daughter and with only two sons, after seeing a family of nine or ten grow up around her. such misfortunes as these should make us ashamed of repining at our own sorrows; I have no idea that these unhappy boys will pass the age which has proved fatal to those who have gone before them, & the parents will count as many tombstones as they have headstones in the church yard as they have seen blooming sons & daughters gathered round their board.—Mama’s friends always make kind inquiries after her, and whilst I think of it let me mention what I have always forgotten before, that Mrs Law alias Mrs Custis, when she was here last summer, spoke so much & with so much attachment of mama, and sent so many messages, that which I never delivered, that I suspect she will be troublesome to you in Washington. she begged that Mama when passing through Washington to come to Boston, would go directly to her house, as to that of a sister, with a great many et ceteras of compliment & kindness that I have forgotten all about.

I go every two or three days to see my pickaninis in the country; Ellen is better than I have seen her for a long time, and Bess although still speckled with the nettle-rash, quite well again in strength and spirits. she talks a great deal, never fails to ask whether “Tommy has cot cole,” (got cold) and to insist upon my going to see the pix pigs & tickies chickens. Tommy (as my baby is always called, in spite of the name which his god-fathers & god-mothers gave him) is well, and pretty, and good. a great darling with his mother who has the chief care of him. he sits in my arms or rolls on the carpet at my feet whilst I hold a novel in my hand and snatch a page at a time, as I can. this is the only thing I can do with a baby on my hands, and I have become a good customer to the circulating libraries. I have just finished the Collegians and Ann of [. . .] Gierstein, and shall set off on my travels this afternoon in search of something new.—

Frances Wright has arrived in Boston to deliver a course of lectures which I hope no body will go to hear. the report is that she has mad[e] a sentimental arrangement with Mr Owen; [. . .] has a wife to be sure but marriage being an immoral institution [. . .] is very heroic to treat it with open scorn. I fear the people here are scarcely advanced enough to relish the doctrine, & Miss Wright will probably not be noticed by any modest woman.—

I have received mama’s letter from Lynchburg and the Jujube shall be forwarded to Richmond for Aunt Jane immediately. this remedy is pleasant and can do no possible harm. the general idea is that it is really affords a good deal of relief to a person troubled with cough. I got a box of it last winter for Mary Goldsborough, who had caught violent cold, and she was sensibly benefitted by the use of it. I wish I could think of any little thing, within the compass of my abilities to send Aunt Jane or Lucy, merely to shew them that I love them as much as ever. ask mama if she can advise tell me what would be agreable to either of them. I think a great deal of all the family and it makes me feel very melancholy to know as I do, how little probability there is, of my ever again seeing them. my past life sometimes appears to me like a dream, and I can scarcely understand that I am so completely cut off from all the early friends & companions of my earlier years. and the idea that my children are to grow up in absolute unacquaintance with any thing almost all that their mother once knew and loved, is more painful than even my own separation, if possible; but so it is in this world and we must take it as it comes to us. farewell dearest sister, love to all, and let me know when Jane is to be confined. how I wish I could see you all together before you separate. why do you never tell me any thing about my old friend Margaret Nicholas? with kisses for Pat & Jeff. I remain ever your own.

the hams have arrived—two taken out—one excellent the other in the situation of Robin’s wife’s cheese. papa is out of town but shall have his when he returns

RC (ViU: Ellen Wayles Randolph Coolidge Correspondence); mutilated at seal; addressed: “To Mrs Nicholas P. Trist. Edgehill Everettsville: Post Office Albemarle Virginia”; stamped; postmarked Boston, 24 July; enclosures noted in the hand of Mary J. Randolph: “1. sermon of Dr Channings on the evidences of Christianity 2. on the Communion by Rev. Greenwood 3. a collection of texts from the new testament on which the Unitarians insist for the support of their opinions 4. A short account of the spurious texts & interpolations by which our bible [. . .] corrupted.”

Coolidge had just finished The Collegians, or The Colleen Bawn, a Tale of Garryowen, by Gerald Griffin (1829), and Anne of Geierstein, or The Maiden of the Mist, by Sir Walter Scott (1829). 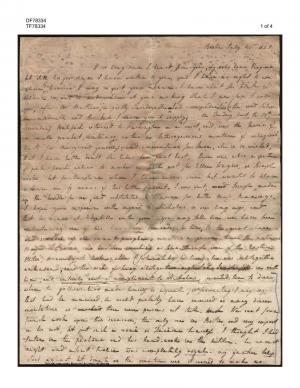