I take so little note of time, my dearest mother, even by it’s loss, that I do not know exactly when I last wrote to any of you, but it seems to me more than a fortnight, and perhaps you are beginning to be surprised at my silence. I have been very busy getting the little girls ready to go into the country; and yesterday afternoon Joseph and myself carried them and their Marblehead nurse Mrs Cox, to the house of a widow about six miles from Boston, where we have decided to board them for the summer, if we find Ellen’s health improve under the influence of country air & free exercise. it was a bitter parting to me, but both Dr Warren and Dr Jackson told us it was the one thing needful for Ellen, that medicine was not what she wanted. her complaint was general feebleness and want of constitution, and that she must be permitted to run at large in the open air. poor little creatures we carried them out as if to take a ride, and having got them into the house, after I had gone to the room prepared for them and arranged their little furniture, & seen that there was nothing wanting, we sent them with Mrs Cox to see the chickens, and hurrying into the carriage drove off whilst they were still in the poultry yard. Joseph has gone this afternoon to see how they are, but I declined accompanying him for the present; my courage is not equal to a second parting as yet, and I wish them to get a little reconciled before I renew their recollections of home by my presence. little Joseph is of course deprived of his nurse, and will have to be bandied from one to another for three months to come, the chambermaid and the cook will have to dispose of him as they can at such times as he is not with me, he is strong healthy and good natured and I dare say will rough it as well as any body. the family where we have placed the girls consists of a widow with three daughters & a humpbacked son. the mother, Mrs Livermore, seems a kind openhearted woman, rather liberal, and somewhat deficient in the shrewdness and thrift which, as a New Englander, should belong to her; not so the eldest daughter a damsel of eight or nine and twenty, who perhaps, aware of mama’s good-natured easiness takes care to keep things together and prevent her from being imposed on. the second sister is the lady of the family and aspires to gentility. the third, (my favorite,) little Martha, a nice girl of fifteen, goes to school and promises herself great pleasure in playing with my babies during holiday hours. I think it probable the son, a poor crippled dwarf will solace himself in the same way. he came with a small cart to carry out their furniture. the little straw chaise was not forgotten and we found him on our arrival greasing the wheels and putting it in order for their use. they these people are very respectable, and the situation altogether as good a one, I believe, as we could have found. the house is comfortable and kept very neat, the yard large & clean with grass and a few fine trees, and I hope my poor pale faced Nell will recruit her health & strength and come back to me looking a little more as I wish to see her. Mrs Stearns, (as you may suppose from your knowledge of her,) has, been upon this occasion as kind as possible, first in assisting us to find a good place to board the children, and now she promises to go and see them every week. the Livermores are not more than three miles from Cambridge in the direction of Mr Pratt’s & Mr Shepherd’s fine houses. I was very anxious to have my darlings in Cambridge [. . .] expressly that they might be under the protection of Aunt Stearns, but the only eligible situation there, within our reach had some disadvantages which prevented our making choice of it.

I am very glad that Nicholas has secured a good house for you, and I hope it is in a healthy situation, but my dear mother, you must not make any of your arrangements with reference to the possibility of my ever making part of your family often enough or long enough to require any extra preparation—I may, taking one of my children, & leaving the others at home, pay you a visit of two or three weeks every two or three years, if the times permit, but when once you get settled at a home of your own, I do not see what is to prevent your coming to me for a much longer time than I could possibly leave my nestlings. I am afraid you are too sanguine in your expectations of being able to lay up money at any rate for several years to come. you will find It will require close economy necessary to enable you to enable you to make the two ends meet. Washington, to be sure, is not Boston, but still you will find innumerable expenses which you do not now anticipate. by paying your bills quarterly and by scrupulous exactness in your accounts you will soon know find whether or not you exceed your [. . .] income, and by retrenching immediately if you find yourself going beyond it, you may avoid running in debt. there are seasons of the year when the calls on your purse will be much greater than at others, and at those times that you feel yourself a little at ease you may by relaxing nothing in your system of economy provide against the difficulties to come. Economy is an art and should be studied before it can be understood. it consists in judiciously adapting your expenses to your receipts, and enjoying the greatest number of comforts which your means will allow of. some people will live better, upon one thousand a year than others can do upon two, have more of the conveniencies and the pleasures of life & enjoy more leave exemption from servile and degrading employments. the greatest drudges are by no means the best economists, and this is true particularly with regard to women. I have known many who worked very hard, lived very uncomfortably, and dressed very shabbily, and at the end of the year, had let more money slip through their fingers, than had been required to keep their neighbours neat, comfortable, and sufficiently at leisure to enjoy [mode]rate recreation and the pleasures of a literature, literary taste—

June 24. my se[rmon on?] economy was cut short, my dear mother, and four day[s] have passed without my having time to finish my letter. I went to see the little girls day before yesterday and found them doing well, and too much taken up [with?] a dog, a horse, a two pigs, half a dozen cows and about forty chickens, to break their hearts about me or any body else.—there is a great waste of sentiment in this world!—the town is very busy just now, talking, and commenting on a great trial, the heirs of Tuttle Hubbard (we yankees have taste in names) versus Peter C. Brooks (the “millionaire”). the amount at stake $ 100.000. [. . .] counsel for plaintiff Mr Wirt, for defendant Mr Webster. pitting these two game cocks against each other has caused great sensation, the court is every day crowded to excess, ladies for the first time (and the judges say for the last) admitted. I went on monday & sat from 8. A M. to 2 P.M. six mortal hours, to hear Mr Webster. he was great certainly, but very close to the point, and that being an alleged error in the books of an insurance broker & his underwriters, was as you may suppose as hard and as dry and knotty as it could well be. before the day the court adjourned Mr Webster had spoken until he was obliged to acknowledge himself overcome with by fatigue, and with his gloomy countenance & habitual sullenness he really looked like a tired ox. one of those overdriven formidable creatures that you sometimes see in a western drove. he returned to the charge on tuesday, but so did not I, I have kept clear of that [. . .] “galere” ever since. Wednesday Mr Wirt opened began his reply; said to be very fine; he will finish to day and every body has gone to hear him except myself, & Elizabeth Swett; I cannot stand the fatigue and she, “se moque de tout cela.” Mrs Thomas Coolidge in spite of ill health and feebleness ventures herself in the crowd, & Mary Goldsborough has “toughed it out” from first to last. I have never said half as much as I should have done about these ladies. Susan is a charming creature. one of the most loveable women I ever saw. Mary with less talent and, more prudence, less loveliness & more of what the world calls beauty, is upon the whole perhaps better calculated for this meridian than the other, but they are both deservedly admired & caressed. my little Ellen thinks that next to [. . .] there is nobody like aunt Mamy Goesber. “when I grow a big girl like Aunt Mamy,” “when my hair cauls (curls) like Aunt Mamy’s” are exclamations perpetually in her mouth. I tried to make her say that she would be like her own mama when she grew up, but the gipsey is too good a judge of beauty, “no no, I be just like aunt Mamy.” Mary Goldsborough’s great beauty, like Sampson’s strength, resides in her hair. I have never seen any thing so [. . .] exquisite; curling in the richest ringlets all over her head, some times floating on her [. . .] white & polished shoulders, sometimes, like Juno’s, one half twisted up and the other falling to one side, and giving to the whole head an air of finished beauty. her features are all good, her eyes fine, and her form perfectly Circassian. fare well dearest mother, it is long since I [have] heard from any of you. love to all.

se moque de tout cela: “makes fun of it all.” 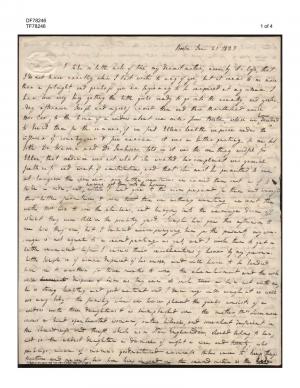